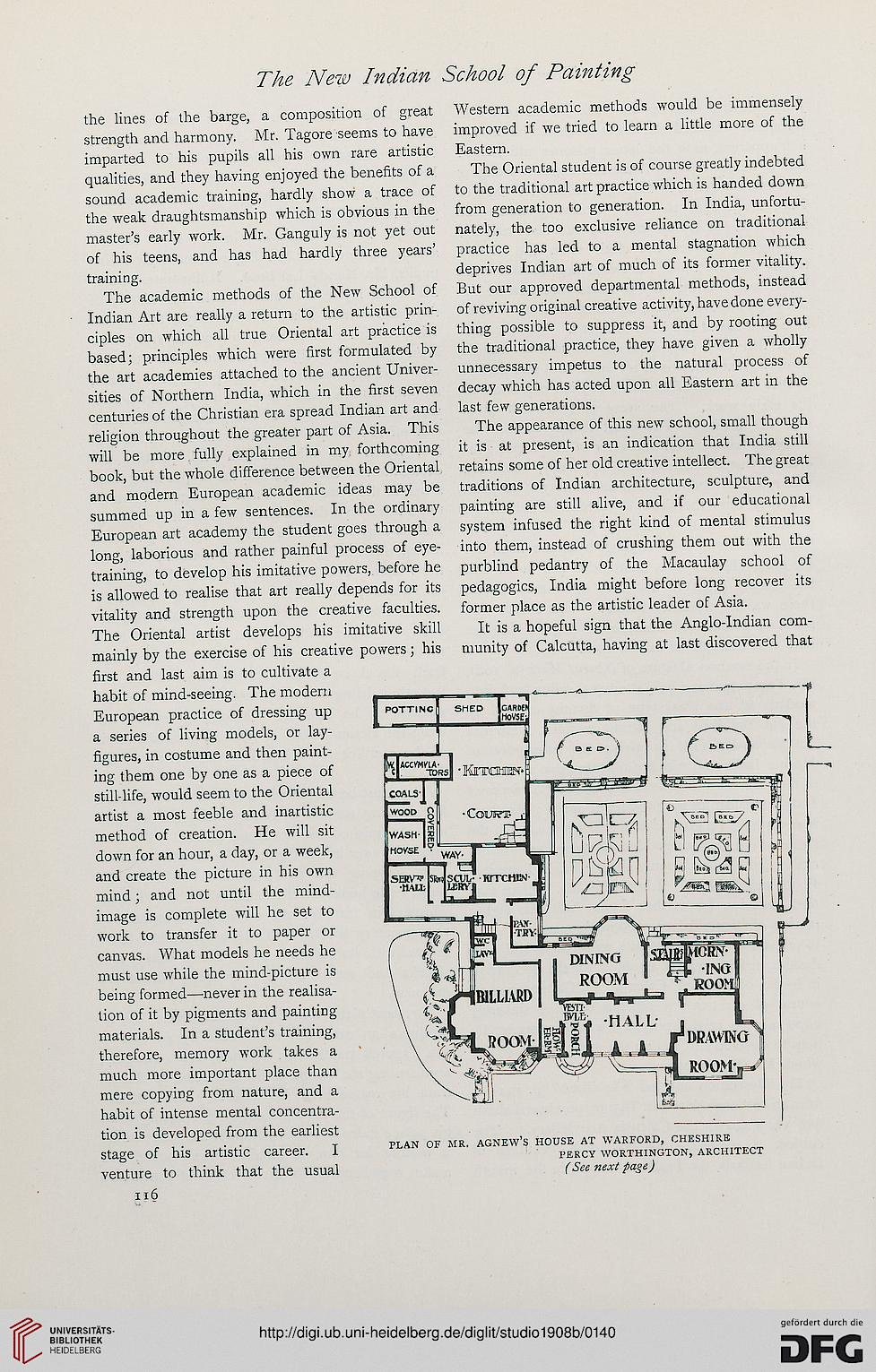 the lines of the barge, a composition of great
strength and harmony. Mr. Tagore seems to have
imparted to his pupils all his own rare artistic
qualities, and they having enjoyed the benefits of a
sound academic training, hardly show a trace of
the weak draughtsmanship which is obvious in the
master’s early work. Mr. Ganguly is not yet out
of his teens, and has had hardly three years’
training.

The academic methods of the New School of
Indian Art are really a return to the artistic prin-
ciples on which all true Oriental art practice is
based; principles which were first formulated by
the art academies attached to the ancient Univer-
sities of Northern India, which in the first seven
centuries of the Christian era spread Indian art and
religion throughout the greater part of Asia. This
will be more fully explained in my forthcoming
book, but the whole difference between the Oriental
and modern European academic ideas may be
summed up in a few sentences. In the ordinary
European art academy the student goes through a
long, laborious and rather painful process of eye-
training, to develop his imitative powers, before he
is allowed to realise that art really depends for its
vitality and strength upon the creative faculties.
The Oriental artist develops his imitative skill
mainly by the exercise of his creative powers; his
first and last aim is to cultivate a
habit of mind-seeing. The modern
European practice of dressing up
a series of living models, or lay-
figures, in costume and then paint-
ing them one by one as a piece of
still-life, would seem to the Oriental
artist a most feeble and inartistic
method of creation. He will sit
down for an hour, a day, or a week,
and create the picture in his own
mind; and not until the mind-
image is complete will he set to
work to transfer it to paper or
canvas. What models he needs he
must use while the mind-picture is
being formed—never in the realisa-
tion of it by pigments and painting
materials. In a student’s training,
therefore, memory work takes a
much more important place than
mere copying from nature, and a
habit of intense mental concentra-
tion is developed from the earliest
stage of his artistic career. I
venture to think that the usual
116

Western academic methods would be immensely
improved if we tried to learn a little more of the
Eastern.

The Oriental student is of course greatly indebted
to the traditional art practice which is handed down
from generation to generation. In India, unfortu-
nately, the too exclusive reliance on traditional
practice has led to a mental stagnation which
deprives Indian art of much of its former vitality.
But our approved departmental methods, instead
of reviving original creative activity, have done every-
thing possible to suppress it, and by rooting out
the traditional practice, they have given a wholly
unnecessary impetus to the natural process of
decay which has acted upon all Eastern art in the
last few generations.

The appearance of this new school, small though
it is at present, is an indication that India still
retains some of her old creative intellect. The great
traditions of Indian architecture, sculpture, and
painting are still alive, and if our educational
system infused the right kind of mental stimulus
into them, instead of crushing them out with the
purblind pedantry of the Macaulay school of
pedagogics, India might before long recover its
former place as the artistic leader of Asia.

It is a hopeful sign that the Anglo-Indian com-
munity of Calcutta, having at last discovered that