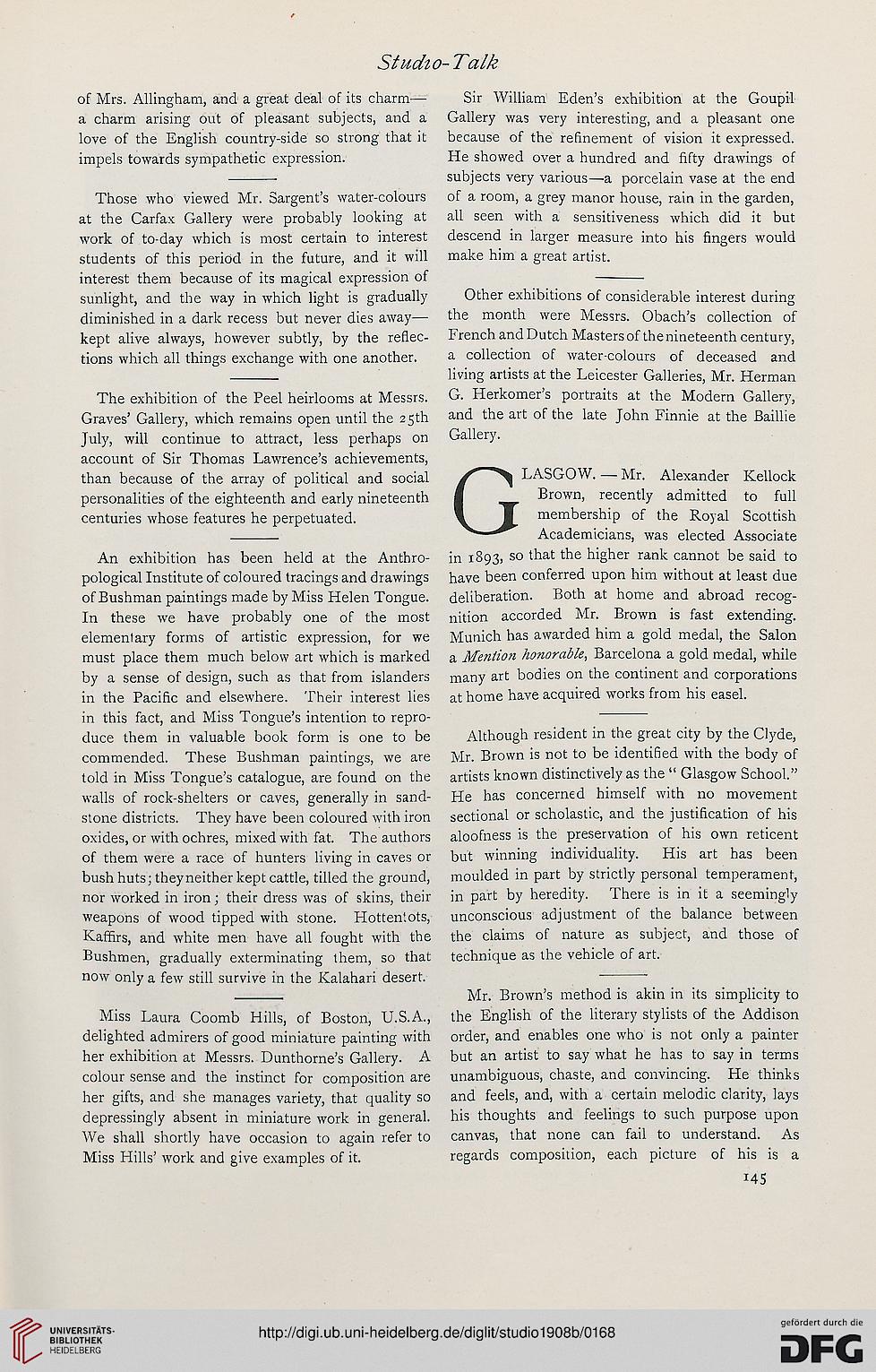 of Mrs. Allingham, and a great deal of its charm—
a charm arising out of pleasant subjects, and a
love of the English country-side so strong that it
impels towards sympathetic expression.

Those who viewed Mr. Sargent’s water-colours
at the Carfax Gallery were probably looking at
work of to-day which is most certain to interest
students of this period in the future, and it will
interest them because of its magical expression of
sunlight, and the way in which light is gradually
diminished in a dark recess but never dies away—
kept alive always, however subtly, by the reflec-
tions which all things exchange with one another.

The exhibition of the Peel heirlooms at Messrs.
Graves’ Gallery, which remains open until the 25th
July, will continue to attract, less perhaps on
account of Sir Thomas Lawrence’s achievements,
than because of the array of political and social
personalities of the eighteenth and early nineteenth
centuries whose features he perpetuated.

An exhibition has been held at the Anthro-
pological Institute of coloured tracings and drawings
of Bushman paintings made by Miss Helen Tongue.
In these we have probably one of the most
elementary forms of artistic expression, for we
must place them much below art which is marked
by a sense of design, such as that from islanders
in the Pacific and elsewhere. Their interest lies
in this fact, and Miss Tongue’s intention to repro-
duce them in valuable book form is one to be
commended. These Bushman paintings, we are
told in Miss Tongue’s catalogue, are found on the
walls of rock-shelters or caves, generally in sand-
stone districts. They have been coloured with iron
oxides, or with ochres, mixed with fat. The authors
of them were a race of hunters living in caves or
bush huts; theyneither kept cattle, tilled the ground,
nor worked in iron; their dress was of skins, their
weapons of wood tipped with stone. Hottentots,
Kaffirs, and white men have all fought with the
Bushmen, gradually exterminating them, so that
now only a few still survive in the Kalahari desert.

Miss Laura Coomb Hills, of Boston, U.S.A.,
delighted admirers of good miniature painting with
her exhibition at Messrs. Dunthorne’s Gallery. A
colour sense and the instinct for composition are
her gifts, and she manages variety, that quality so
depressingly absent in miniature work in general.
We shall shortly have occasion to again refer to
Miss Hills’ work and give examples of it.

Sir William Eden’s exhibition at the Goupil
Gallery was very interesting, and a pleasant one
because of the refinement of vision it expressed.
He showed over a hundred and fifty drawings of
subjects very various—a porcelain vase at the end
of a room, a grey manor house, rain in the garden,
all seen with a sensitiveness which did it but
descend in larger measure into his fingers would
make him a great artist.

Other exhibitions of considerable interest during
the month were Messrs. Obach’s collection of
French and Dutch Masters of the nineteenth century,
a collection of water-colours of deceased and
living artists at the Leicester Galleries, Mr. Herman
G. Herkomer’s portraits at the Modern Gallery,
and the art of the late John Finnie at the Baillie
Gallery.

GLASGOW. — Mr. Alexander Kellock
Brown, recently admitted to full
membership of the Royal Scottish
Academicians, was elected Associate
in 1893, so that the higher rank cannot be said to
have been conferred upon him without at least due
deliberation. Both at home and abroad recog-
nition accorded Mr. Brown is fast extending.
Munich has awarded him a gold medal, the Salon
a Mention honorable, Barcelona a gold medal, while
many art bodies on the continent and corporations
at home have acquired works from his easel.

Although resident in the great city by the Clyde,
Mr. Brown is not to be identified with the body of
artists known distinctively as the “ Glasgow School.”
He has concerned himself with no movement
sectional or scholastic, and the justification of his
aloofness is the preservation of his own reticent
but winning individuality. His art has been
moulded in part by strictly personal temperament,
in part by heredity. There is in it a seemingly
unconscious adjustment of the balance between
the claims of nature as subject, and those of
technique as the vehicle of art.

Mr. Brown’s method is akin in its simplicity to
the English of the literary stylists of the Addison
order, and enables one who is not only a painter
but an artist to say what he has to say in terms
unambiguous, chaste, and convincing. He thinks
and feels, and, with a certain melodic clarity, lays
his thoughts and feelings to such purpose upon
canvas, that none can fail to understand. As
regards composition, each picture of his is a