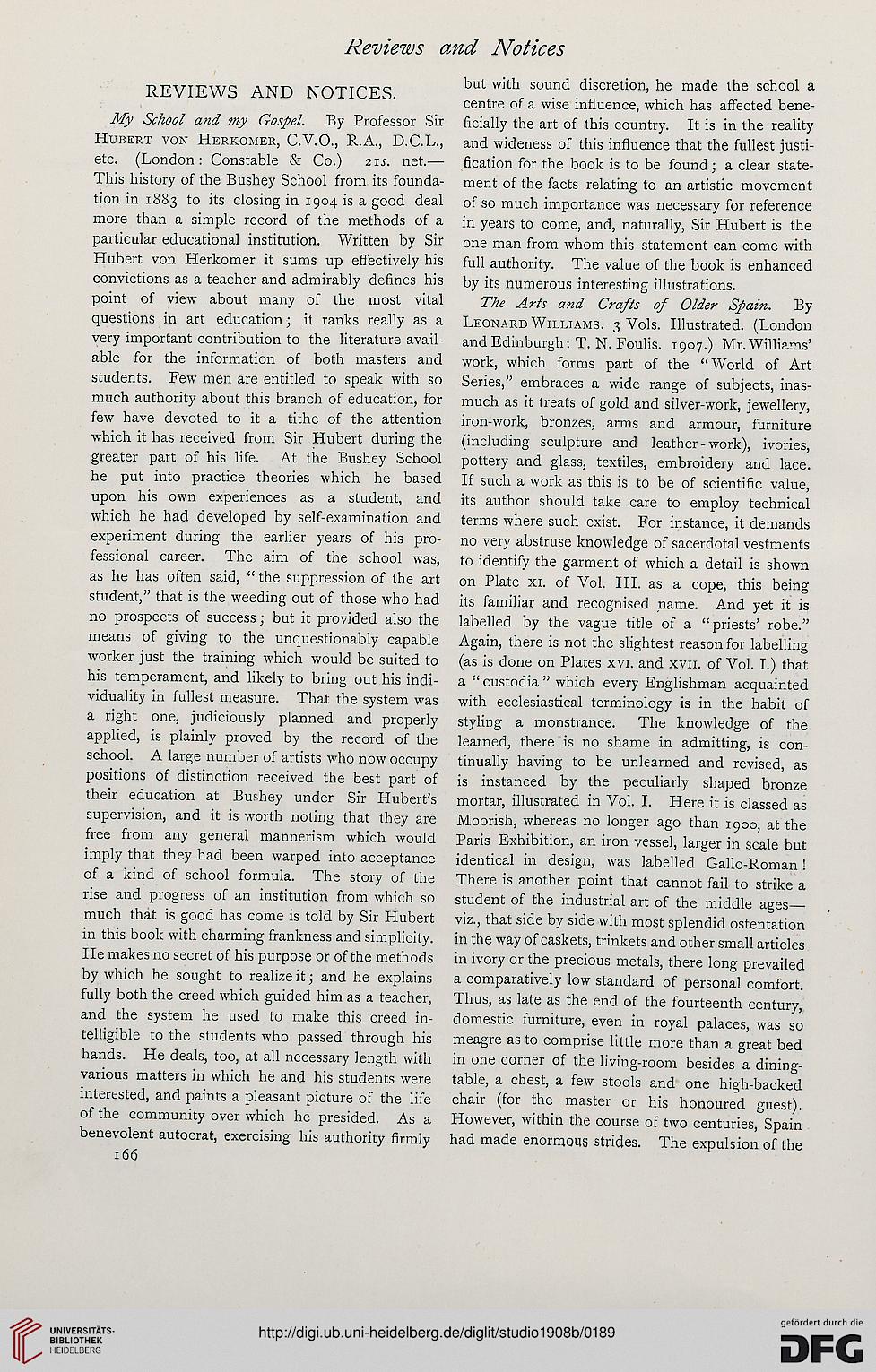 My School and my Gospel. By Professor Sir
Hubert von Herkomer, C.V.O., R.A., D.C.L.,
etc. (London: Constable & Co.) 215. net.—
This history of the Bushey School from its founda-
tion in 1883 to its closing in 1904 is a good deal
more than a simple record of the methods of a
particular educational institution. Written by Sir
Hubert von Herkomer it sums up effectively his
convictions as a teacher and admirably defines his
point of view about many of the most vital
questions in art education; it ranks really as a
very important contribution to the literature avail-
able for the information of both masters and
students. Few men are entitled to speak with so
much authority about this branch of education, for
few have devoted to it a tithe of the attention
which it has received from Sir Hubert during the
greater part of his life. At the Bushey School
he put into practice theories which he based
upon his own experiences as a student, and
which he had developed by self-examination and
experiment during the earlier years of his pro-
fessional career. The aim of the school was,
as he has often said, “ the suppression of the art
student,” that is the weeding out of those who had
no prospects of success; but it provided also the
means of giving to the unquestionably capable
worker just the training which would be suited to
his temperament, and likely to bring out his indi-
viduality in fullest measure. That the system was
a right one, judiciously planned and properly
applied, is plainly proved by the record of the
school. A large number of artists who now occupy
positions of distinction received the best part of
their education at Bushey under Sir Hubert’s
supervision, and it is worth noting that they are
free from any general mannerism which would
imply that they had been warped into acceptance
of a kind of school formula. The story of the
rise and progress of an institution from which so
much that is good has come is told by Sir Hubert
in this book with charming frankness and simplicity.
He makes no secret of his purpose or of the methods
by which he sought to realize it; and he explains
fully both the creed which guided him as a teacher,
and the system he used to make this creed in-
telligible to the students who passed through his
hands. He deals, too, at all necessary length with
various matters in which he and his students were
interested, and paints a pleasant picture of the life
of the community over which he presided. As a
benevolent autocrat, exercising his authority firmly
166

but with sound discretion, he made the school a
centre of a wise influence, which has affected bene-
ficially the art of this country. It is in the reality
and wideness of this influence that the fullest justi-
fication for the book is to be found; a clear state-
ment of the facts relating to an artistic movement
of so much importance was necessary for reference
in years to come, and, naturally, Sir Hubert is the
one man from whom this statement can come with
full authority. The value of the book is enhanced
by its numerous interesting illustrations.

The Arts and Crafts of Older Spain. By
Leonard Williams. 3 Vols. Illustrated. (London
and Edinburgh: T. N. Foulis. 1907.) Mr. Williams’
work, which forms part of the “World of Art
Series,” embraces a wide range of subjects, inas-
much as it treats of gold and silver-work, jewellery,
iron-work, bronzes, arms and armour, furniture
(including sculpture and leather-work), ivories,
pottery and glass, textiles, embroidery and lace.
If such a work as this is to be of scientific value,
its author should take care to employ technical
terms where such exist. For instance, it demands
no very abstruse knowledge of sacerdotal vestments
to identify the garment of which a detail is shown
on Plate xi. of Vol. III. as a cope, this being
its familiar and recognised name. And yet it is
labelled by the vague title of a “ priests’ robe.”
Again, there is not the slightest reason for labelling
(as is done on Plates xvi. and xvn. of Vol. I.) that
a “ custodia ” which every Englishman acquainted
with ecclesiastical terminology is in the habit of
styling a monstrance. The knowledge of the
learned, there is no shame in admitting, is con-
tinually having to be unlearned and revised, as
is instanced by the peculiarly shaped bronze
mortar, illustrated in Vol. I. Here it is classed as
Moorish, whereas no longer ago than 1900, at the
Paris Exhibition, an iron vessel, larger in scale but
identical in design, was labelled Gallo-Roman!
There is another point that cannot fail to strike a
student of the industrial art of the middle ages—
viz., that side by side with most splendid ostentation
in the way of caskets, trinkets and other small articles
in ivory or the precious metals, there long prevailed
a comparatively low standard of personal comfort.
Thus, as late as the end of the fourteenth century,
domestic furniture, even in royal palaces, was so
meagre as to comprise little more than a great bed
in one corner of the living-room besides a dining-
table, a chest, a few stools and one high-backed
chair (for the master or his honoured guest).
However, within the course of two centuries, Spain
had made enormous strides. The expulsion of the