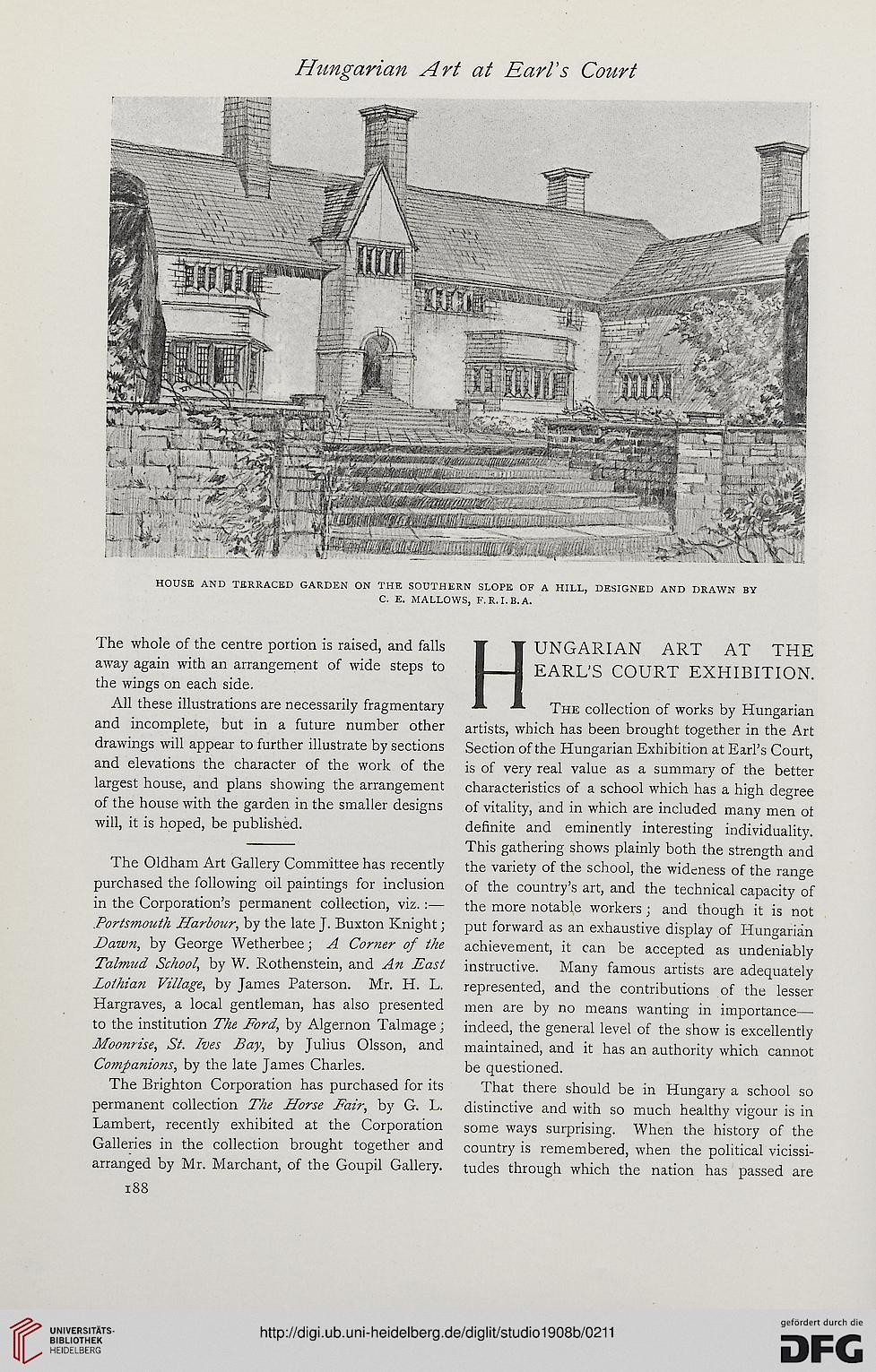 HOUSE AND TERRACED GARDEN ON THE SOUTHERN SLOPE OF A HILL, DESIGNED AND DRAWN BY

The whole of the centre portion is raised, and falls
away again with an arrangement of wide steps to
the wings on each side.

All these illustrations are necessarily fragmentary
and incomplete, but in a future number other
drawings will appear to further illustrate by sections
and elevations the character of the work of the
largest house, and plans showing the arrangement
of the house with the garden in the smaller designs
will, it is hoped, be published.

The Oldham Art Gallery Committee has recently
purchased the following oil paintings for inclusion
in the Corporation’s permanent collection, viz.:—
Portsmouth Harbour, by the late J. Buxton Knight;
Dawn, by George Wetherbee; A Corner of the
Talmud School, by W. Rothenstein, and An East
Lothian Village, by James Paterson. Mr. H. L.
Hargraves, a local gentleman, has also presented
to the institution The Ford, by Algernon Talmage;
Moonrise, St. Ives Bay, by Julius Olsson, and
Companions, by the late James Charles.

The Brighton Corporation has purchased for its
permanent collection The Horse Fair, by G. L.
Lambert, recently exhibited at the Corporation
Galleries in the collection brought together and
arranged by Mr. Marchant, of the Goupil Gallery.

Hungarian art at the

The collection of works by Hungarian
artists, which has been brought together in the Art
Section of the Hungarian Exhibition at Earl’s Court,
is of very real value as a summary of the better
characteristics of a school which has a high degree
of vitality, and in which are included many men ot
definite and eminently interesting individuality.
This gathering shows plainly both the strength and
the variety of the school, the wideness of the range
of the country’s art, and the technical capacity of
the more notable workers ; and though it is not
put forward as an exhaustive display of Hungarian
achievement, it can be accepted as undeniably
instructive. Many famous artists are adequately
represented, and the contributions of the lesser
men are by no means wanting in importance—
indeed, the general level of the show is excellently
maintained, and it has an authority which cannot
be questioned.

That there should be in Hungary a school so
distinctive and with so much healthy vigour is in
some ways surprising. When the history of the
country is remembered, when the political vicissi-
tudes through which the nation has passed are