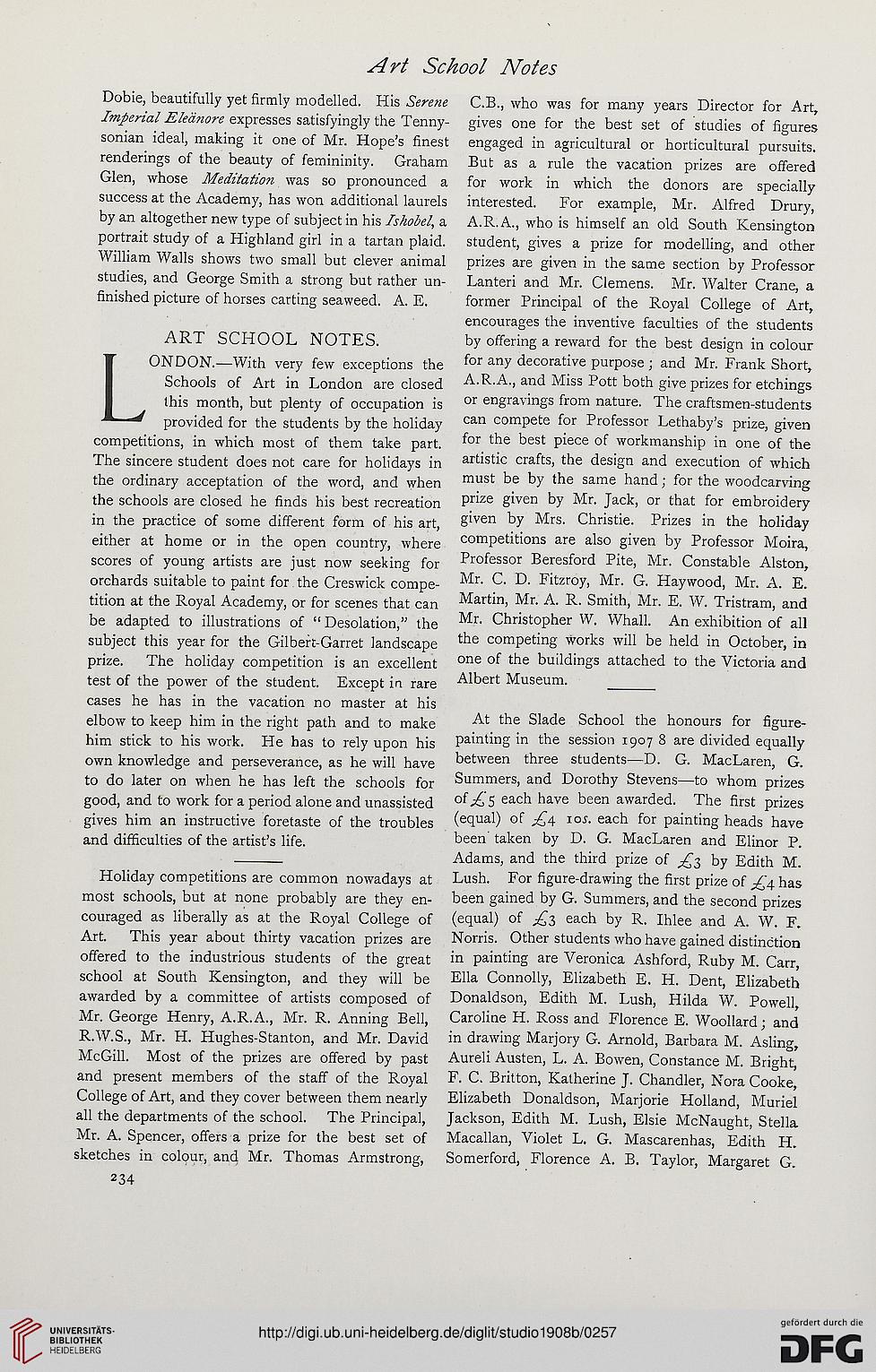 Dobie, beautifully yet firmly modelled. His Serene
Imperial Elea?iore expresses satisfyingly the Tenny-
sonian ideal, making it one of Mr. Hope’s finest
renderings of the beauty of femininity. Graham
Glen, whose Meditation was so pronounced a
success at the Academy, has won additional laurels
by an altogether new type of subject in his Ishobel, a
portrait study of a Highland girl in a tartan plaid.
William Walls shows two small but clever animal
studies, and George Smith a strong but rather un-
finished picture of horses carting seaweed. A. E.

LONDON.—With very few exceptions the
Schools of Art in London are closed
this month, but plenty of occupation is
provided for the students by the holiday
competitions, in which most of them take part.
The sincere student does not care for holidays in
the ordinary acceptation of the word, and when
the schools are closed he finds his best recreation
in the practice of some different form of his art,
either at home or in the open country, where
scores of young artists are just now seeking for
orchards suitable to paint for the Creswick compe-
tition at the Royal Academy, or for scenes that can
be adapted to illustrations of “ Desolation,” the
subject this year for the Gilbert-Garret landscape
prize. The holiday competition is an excellent
test of the power of the student. Except in rare
cases he has in the vacation no master at his
elbow to keep him in the right path and to make
him stick to his work. He has to rely upon his
own knowledge and perseverance, as he will have
to do later on when he has left the schools for
good, and to work for a period alone and unassisted
gives him an instructive foretaste of the troubles
and difficulties of the artist’s life.

Holiday competitions are common nowadays at
most schools, but at none probably are they en-
couraged as liberally as at the Royal College of
Art. This year about thirty vacation prizes are
offered to the industrious students of the great
school at South Kensington, and they will be
awarded by a committee of artists composed of
Mr. George Henry, A.R.A., Mr. R. Anning Bell,
R.W.S., Mr. H. Hughes-Stanton, and Mr. David
McGill. Most of the prizes are offered by past
and present members of the staff of the Royal
College of Art, and they cover between them nearly
all the departments of the school. The Principal,
Mr. A. Spencer, offers a prize for the best set of
sketches in colour, and Mr. Thomas Armstrong,
234

C.B., who was for many years Director for Art,
gives one for the best set of studies of figures
engaged in agricultural or horticultural pursuits.
But as a rule the vacation prizes are offered
for work in which the donors are specially
interested. For example, Mr. Alfred Drury,
A.R.A., who is himself an old South Kensington
student, gives a prize for modelling, and other
prizes are given in the same section by Professor
Lanteri and Mr. Clemens. Mr. Walter Crane, a
former Principal of the Royal College of Art,
encourages the inventive faculties of the students
by offering a reward for the best design in colour
for any decorative purpose ; and Mr. Frank Short,
A.R.A., and Miss Pott both give prizes for etchings
or engravings from nature. The craftsmen-students
can compete for Professor Lethaby’s prize, given
for the best piece of workmanship in one of the
artistic crafts, the design and execution of which
must be by the same hand; for the woodcarving
prize given by Mr. Jack, or that for embroidery
given by Mrs. Christie. Prizes in the holiday
competitions are also given by Professor Moira,
Professor Beresford Pite, Mr. Constable Alston,
Mr. C. D. Fitzroy, Mr. G. Haywood, Mr. A. E.
Martin, Mr. A. R. Smith, Mr. E. W. Tristram, and
Mr. Christopher W. Whall. An exhibition of all
the competing works will be held in October, in
one of the buildings attached to the Victoria and
Albert Museum.