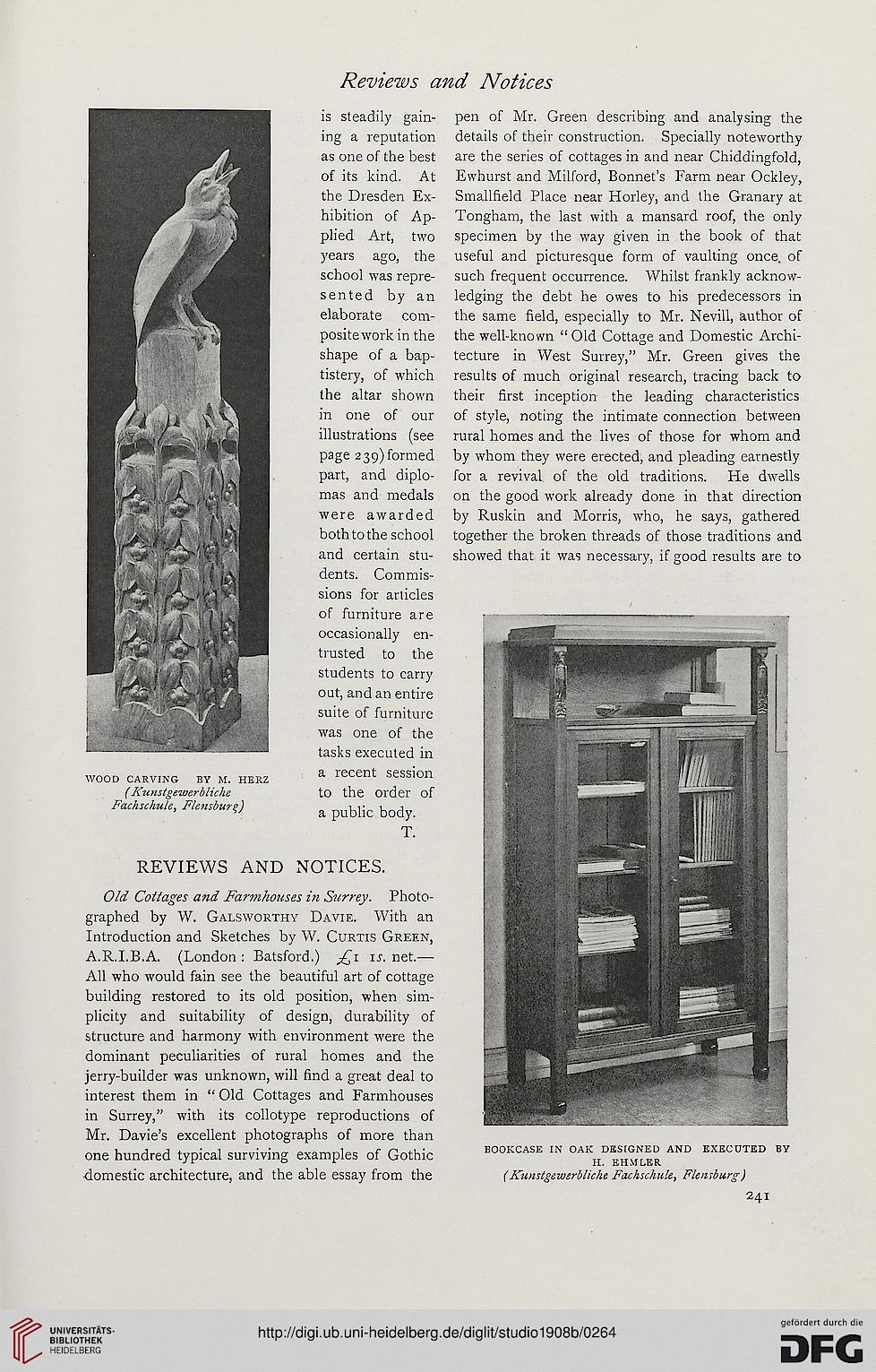 is steadily gain-
ing a reputation
as one of the best
of its kind. At
the Dresden Ex-
hibition of Ap-
plied Art, two
years ago, the
school was repre-
sented by an
elaborate com-
posite work in the
shape of a bap-
tistery, of which
the altar shown
in one of our
illustrations (see
page 239) formed
part, and diplo-
mas and medals
were awarded
both to the school
and certain stu-
dents. Commis-
sions for articles
of furniture are
occasionally en-
trusted to the
students to carry
out, and an entire
suite of furniture
was one of the
tasks executed in
a recent session
to the order of
a public body.

Old Cottages and Farmhouses in Surrey. Photo-
graphed by W. Galsworthy Davie. With an
Introduction and Sketches by W. Curtis Green,
A.R.I.B.A. (London : Batsford.) ir. net.—
All who would fain see the beautiful art of cottage
building restored to its old position, when sim-
plicity and suitability of design, durability of
structure and harmony with environment were the
dominant peculiarities of rural homes and the
jerry-builder was unknown, will find a great deal to
interest them in “ Old Cottages and Farmhouses
in Surrey,” with its collotype reproductions of
Mr. Davie’s excellent photographs of more than
one hundred typical surviving examples of Gothic
domestic architecture, and the able essay from the

pen of Mr. Green describing and analysing the
details of their construction. Specially noteworthy
are the series of cottages in and near Chiddingfold,
Ewhurst and Milford, Bonnet’s Farm near Ockley,
Smallfield Place near Horley, and the Granary at
Tongham, the last with a mansard roof, the only
specimen by the way given in the book of that
useful and picturesque form of vaulting once, of
such frequent occurrence. Whilst frankly acknow-
ledging the debt he owes to his predecessors in
the same field, especially to Mr. Nevill, author of
the well-known “Old Cottage and Domestic Archi-
tecture in West Surrey,” Mr. Green gives the
results of much original research, tracing back to
their first inception the leading characteristics
of style, noting the intimate connection between
rural homes and the lives of those for whom and
by whom they were erected, and pleading earnestly
for a revival of the old traditions. He dwells
on the good work already done in that direction
by Ruskin and Morris, who, he says, gathered
together the broken threads of those traditions and
showed that it was necessary, if good results are to

BOOKCASE IN OAK DESIGNED AND EXECUTED BY
H. EHMLKR