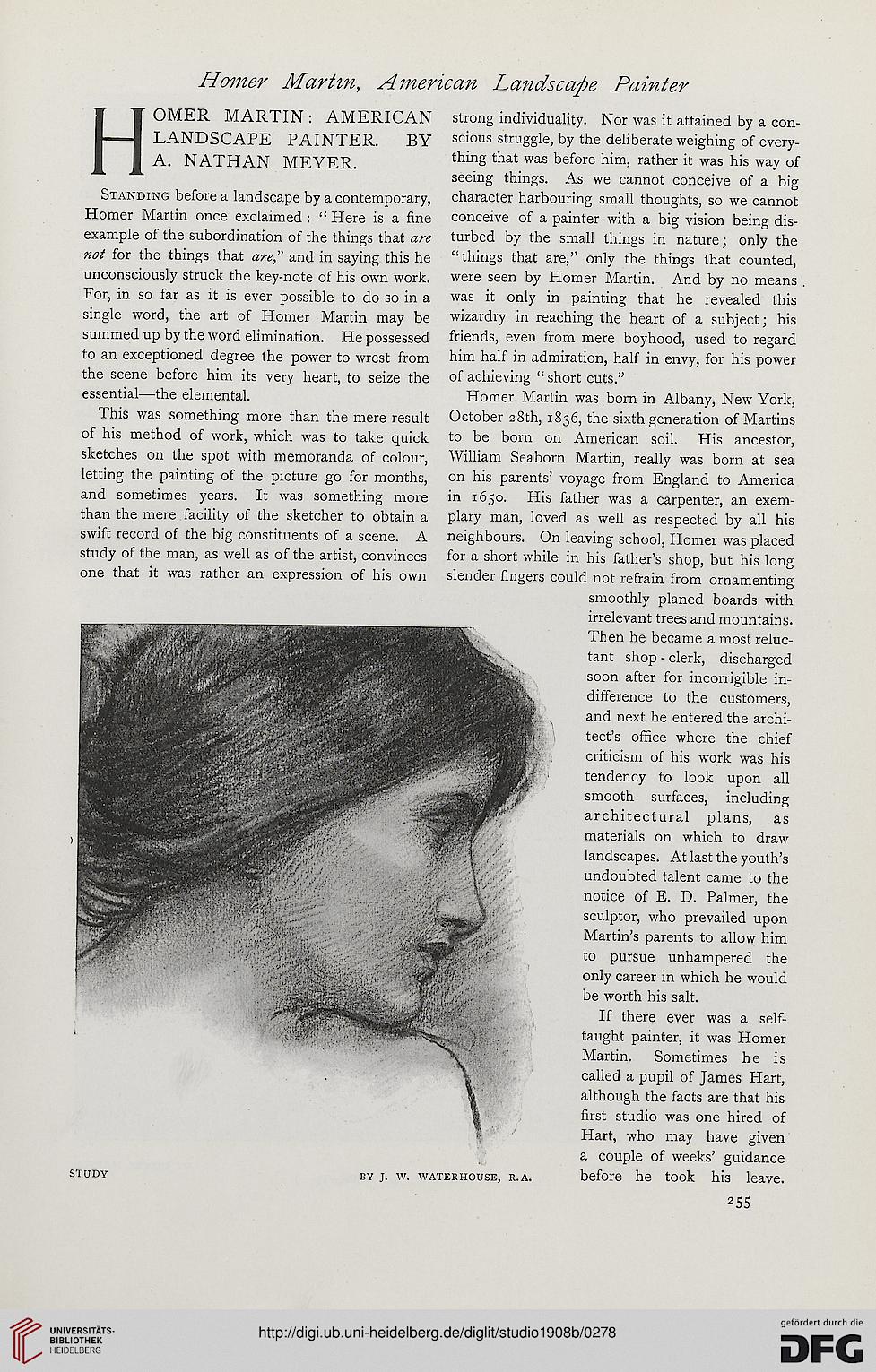 LANDSCAPE PAINTER. BY
A. NATHAN MEYER.

Standing before a landscape by a contemporary,
Homer Martin once exclaimed : “ Here is a fine
example of the subordination of the things that are
not for the things that are,” and in saying this he
unconsciously struck the key-note of his own work.
For, in so far as it is ever possible to do so in a
single word, the art of Homer Martin may be
summed up by the word elimination. He possessed
to an exceptioned degree the power to wrest from
the scene before him its very heart, to seize the
essential—the elemental.

This was something more than the mere result
of his method of work, which was to take quick
sketches on the spot with memoranda of colour,
letting the painting of the picture go for months,
and sometimes years. It was something more
than the mere facility of the sketcher to obtain a
swift record of the big constituents of a scene. A
study of the man, as well as of the artist, convinces
one that it was rather an expression of his own

strong individuality. Nor was it attained by a con-
scious struggle, by the deliberate weighing of every-
thing that was before him, rather it was his way of
seeing things. As we cannot conceive of a big
character harbouring small thoughts, so we cannot
conceive of a painter with a big vision being dis-
turbed by the small things in nature; only the
“things that are,” only the things that counted,
were seen by Homer Martin. And by no means
was it only in painting that he revealed this
wizardry in reaching the heart of a subject; his
friends, even from mere boyhood, used to regard
him half in admiration, half in envy, for his power
of achieving “ short cuts.”

Homer Martin was born in Albany, New York,
October 28th, 1836, the sixth generation of Martins
to be bom on American soil. His ancestor,
William Seaborn Martin, really was born at sea
on his parents’ voyage from England to America
in 1650. His father was a carpenter, an exem-
plary man, loved as well as respected by all his
neighbours. On leaving school, Homer was placed
for a short while in his father’s shop, but his long
slender fingers could not refrain from ornamenting
smoothly planed boards with
irrelevant trees and mountains.
Then he became a most reluc-
tant shop - clerk, discharged
soon after for incorrigible in-
difference to the customers,
and next he entered the archi-
tect’s office where the chief
criticism of his work was his
tendency to look upon all
smooth surfaces, including
architectural plans, as
materials on which to draw
landscapes. At last the youth’s
undoubted talent came to the
notice of E. D. Palmer, the
sculptor, who prevailed upon
Martin’s parents to allow him
to pursue unhampered the
only career in which he would
be worth his salt.

If there ever was a self-
taught painter, it was Homer
Martin. Sometimes he is
called a pupil of James Hart,
although the facts are that his
first studio was one hired of
Hart, who may have given
a couple of weeks’ guidance
before he took his leave.