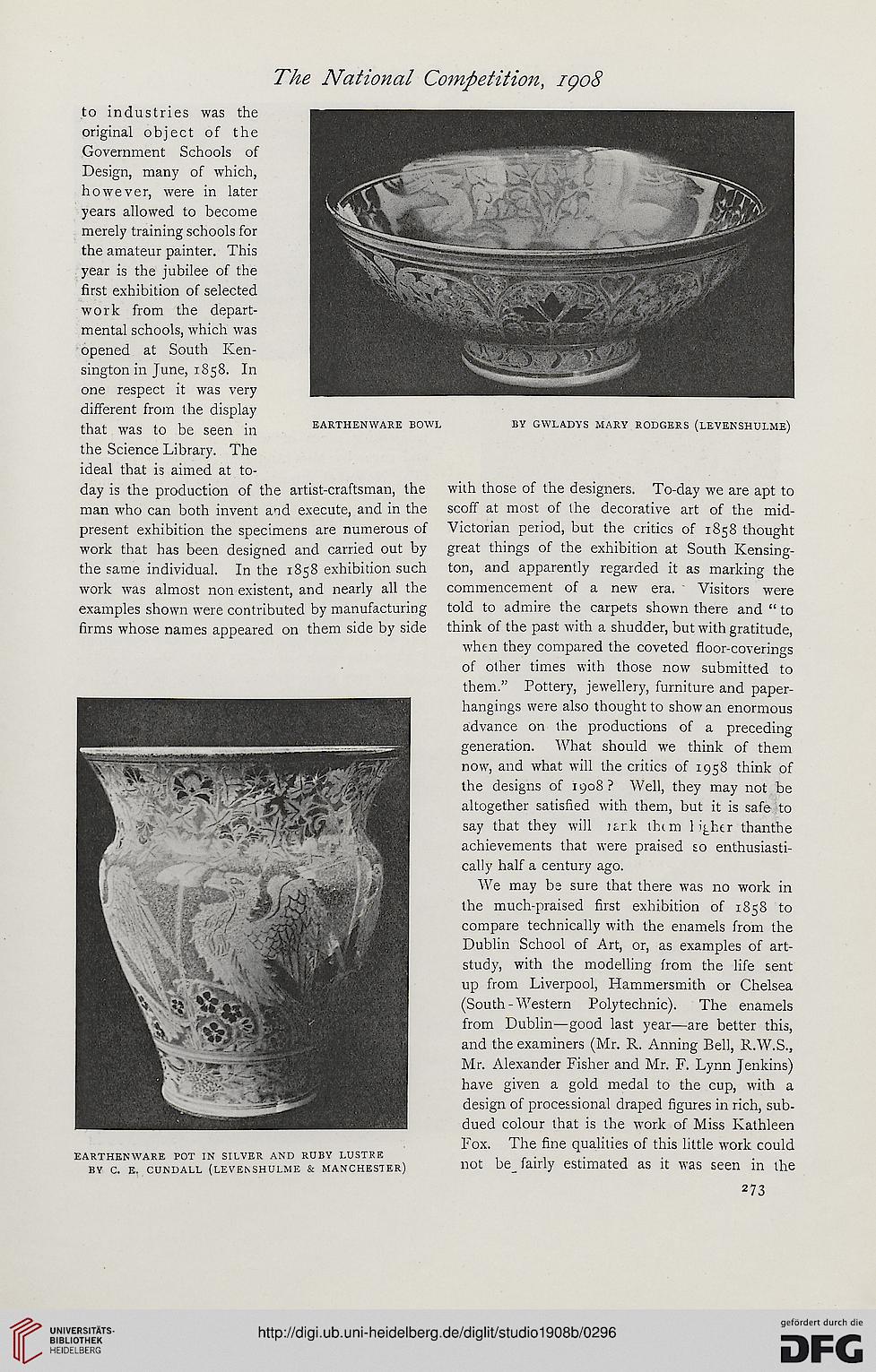 to industries was the
original object of the
Government Schools of
Design, many of which,
however, were in later
years allowed to become
merely training schools for
the amateur painter. This
year is the jubilee of the
first exhibition of selected
work from the depart-
mental schools, which was
opened at South Ken-
sington in June, 1858. In
one respect it was very
different from the display
that was to be seen in
the Science Library. The
ideal that is aimed at to-
day is the production of the artist-craftsman, the
man who can both invent and execute, and in the
present exhibition the specimens are numerous of
work that has been designed and carried out by
the same individual. In the 1858 exhibition such
work was almost non existent, and nearly all the
examples shown were contributed by manufacturing
firms whose names appeared on them side by side

with those of the designers. To-day we are apt to
scoff at most of the decorative art of the mid-
Victorian period, but the critics of 1858 thought
great things of the exhibition at South Kensing-
ton, and apparently regarded it as marking the
commencement of a new era. Visitors were
told to admire the carpets shown there and “ to
think of the past with a shudder, but with gratitude,
when they compared the coveted floor-coverings
of other times with those now submitted to
them.” Pottery, jewellery, furniture and paper-
hangings were also thought to show an enormous
advance on the productions of a preceding
generation. What should we think of them
now, and what will the critics of 1958 think of
the designs of 1908? Well, they may not be
altogether satisfied with them, but it is safe to
say that they will lark them 1 igher thanthe
achievements that were praised so enthusiasti-
cally half a century ago.

We may be sure that there was no work in
the much-praised first exhibition of 1858 to
compare technically with the enamels from the
Dublin School of Art, or, as examples of art-
study, with the modelling from the life sent
up from Liverpool, Hammersmith or Chelsea
(South - Western Polytechnic). The enamels
from Dublin—good last year—are better this,
and the examiners (Mr. R. Anning Bell, R.W.S.,
Mr. Alexander Fisher and Mr. F. Lynn Jenkins)
have given a gold medal to the cup, with a
design of processional draped figures in rich, sub-
dued colour that is the work of Miss Kathleen
Fox. The fine qualities of this little work could
not be_ fairly estimated as it was seen in the