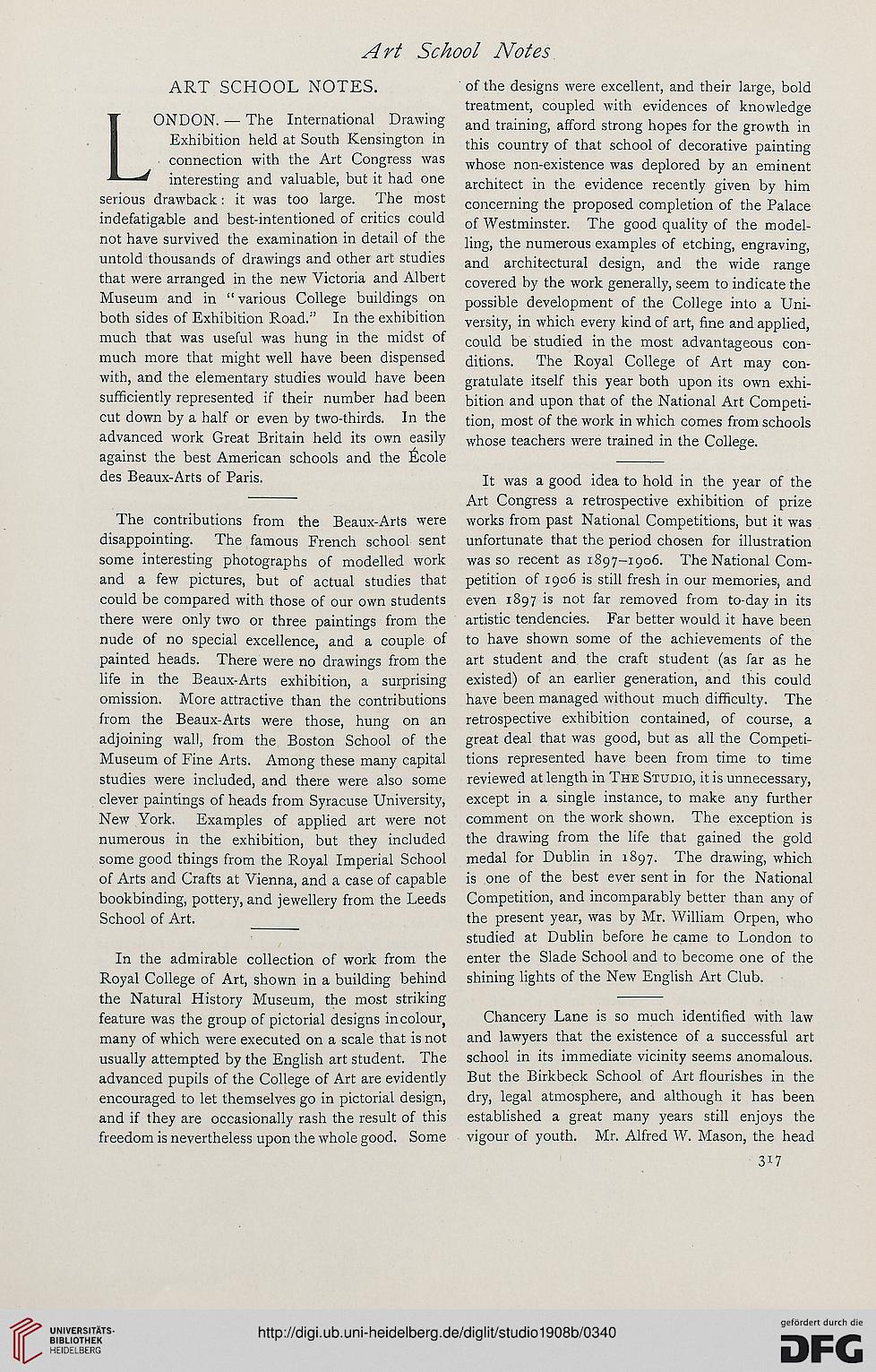 LONDON. — The International Drawing
Exhibition held at South Kensington in
connection with the Art Congress was
interesting and valuable, but it had one
serious drawback: it was too large. The most
indefatigable and best-intentioned of critics could
not have survived the examination in detail of the
untold thousands of drawings and other art studies
that were arranged in the new Victoria and Albert
Museum and in “ various College buildings on
both sides of Exhibition Road.1’ In the exhibition
much that was useful was hung in the midst of
much more that might well have been dispensed
with, and the elementary studies would have been
sufficiently represented if their number had been
cut down by a half or even by two-thirds. In the
advanced work Great Britain held its own easily
against the best American schools and the £cole
des Beaux-Arts of Paris.

The contributions from the Beaux-Arts were
disappointing. The famous French school sent
some interesting photographs of modelled work
and a few pictures, but of actual studies that
could be compared with those of our own students
there were only two or three paintings from the
nude of no special excellence, and a couple of
painted heads. There were no drawings from the
life in the Beaux-Arts exhibition, a surprising
omission. More attractive than the contributions
from the Beaux-Arts were those, hung on an
adjoining wall, from the Boston School of the
Museum of Fine Arts. Among these many capital
studies were included, and there were also some
clever paintings of heads from Syracuse University,
New York. Examples of applied art were not
numerous in the exhibition, but they included
some good things from the Royal Imperial School
of Arts and Crafts at Vienna, and a case of capable
bookbinding, pottery, and jewellery from the Leeds
School of Art.

In the admirable collection of work from the
Royal College of Art, shown in a building behind
the Natural History Museum, the most striking
feature was the group of pictorial designs incolours
many of which were executed on a scale that is not
usually attempted by the English art student. The
advanced pupils of the College of Art are evidently
encouraged to let themselves go in pictorial design,
and if they are occasionally rash the result of this
freedom is nevertheless upon the whole good. Some

of the designs were excellent, and their large, bold
treatment, coupled with evidences of knowledge
and training, afford strong hopes for the growth in
this country of that school of decorative painting
whose non-existence was deplored by an eminent
architect in the evidence recently given by him
concerning the proposed completion of the Palace
of Westminster. The good quality of the model-
ling, the numerous examples of etching, engraving,
and architectural design, and the wide range
covered by the work generally, seem to indicate the
possible development of the College into a Uni-
versity, in which every kind of art, fine and applied,
could be studied in the most advantageous con-
ditions. The Royal College of Art may con-
gratulate itself this year both upon its own exhi-
bition and upon that of the National Art Competi-
tion, most of the work in which comes from schools
whose teachers were trained in the College.

It was a good idea to hold in the year of the
Art Congress a retrospective exhibition of prize
works from past National Competitions, but it was
unfortunate that the period chosen for illustration
was so recent as 1897-1906. The National Com-
petition of 1906 is still fresh in our memories, and
even 1897 is not far removed from to-day in its
artistic tendencies. Far better would it have been
to have shown some of the achievements of the
art student and the craft student (as far as he
existed) of an earlier generation, and this could
have been managed without much difficulty. The
retrospective exhibition contained, of course, a
great deal that was good, but as all the Competi-
tions represented have been from time to time
reviewed at length in The Studio, it is unnecessary,
except in a single instance, to make any further
comment on the work shown. The exception is
the drawing from the life that gained the gold
medal for Dublin in 1897. The drawing, which
is one of the best ever sent in for the National
Competition, and incomparably better than any of
the present year, was by Mr. William Orpen, who
studied at Dublin before he came to London to
enter the Slade School and to become one of the
shining lights of the New English Art Club.

Chancery Lane is so much identified with law
and lawyers that the existence of a successful art
school in its immediate vicinity seems anomalous.
But the Birkbeck School of Art flourishes in the
dry, legal atmosphere, and although it has been
established a great many years still enjoys the
vigour of youth. Mr. Alfred W. Mason, the head