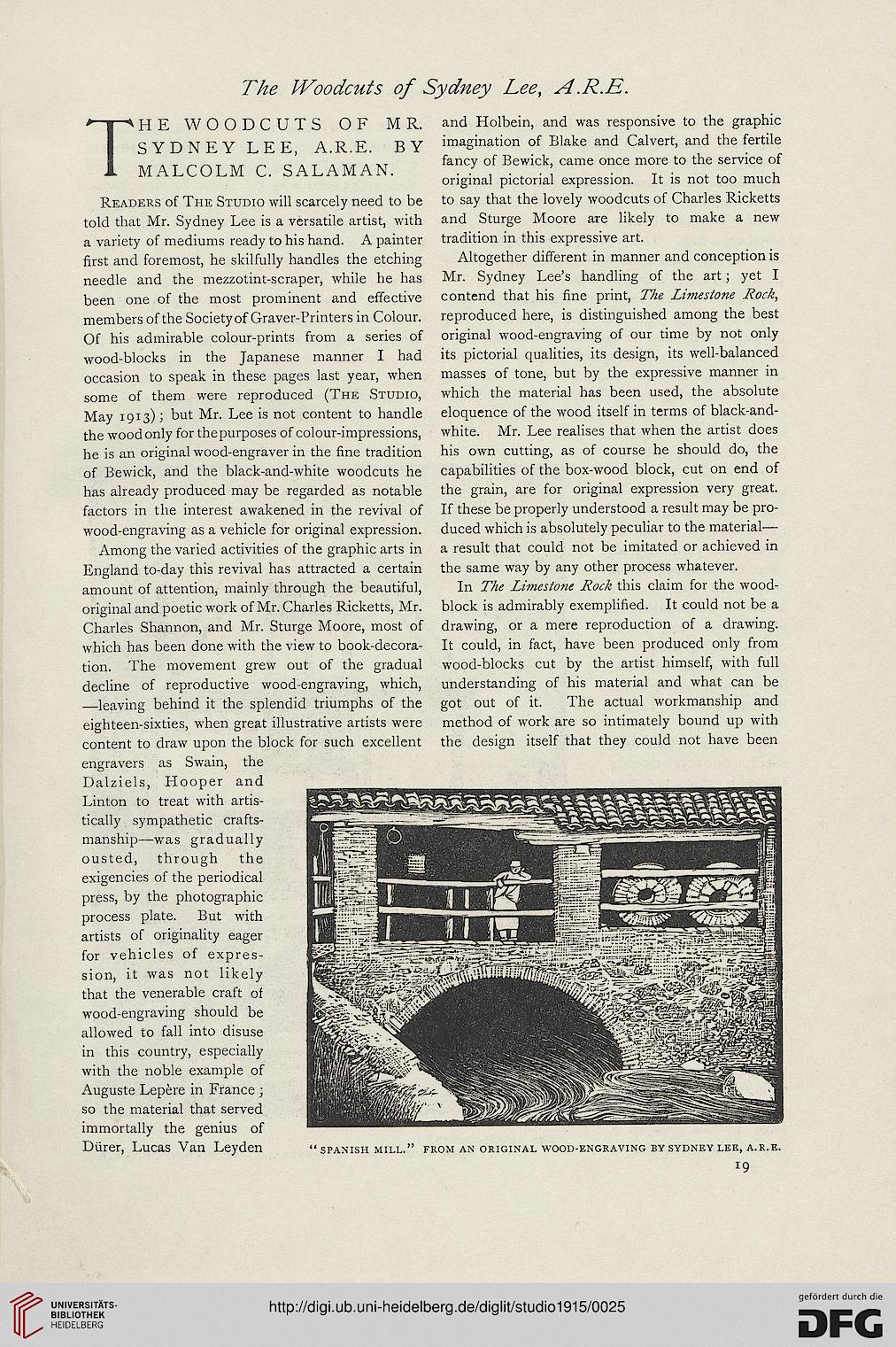 THE WOODCUTS OF MR. and Holbein, and was responsive to the graphic
SYDNEY LEE ARE BY imagination of Blake and Calvert, and the fertile
MALCOLM C SALAMAN fancy of Bewick, came once more to the service of

original pictorial expression. It is not too much
Readers of The Studio will scarcely need to be to say that the lovely woodcuts of Charles Ricketts
told that Mr. Sydney Lee is a versatile artist, with and Sturge Moore are likely to make a new
a variety of mediums ready to his hand. A painter tradition in this expressive art.
first and foremost, he skilfully handles the etching Altogether different in manner and conception is
needle and the mezzotint-scraper, while he has Mr. Sydney Lee's handling of the art; yet I
been one of the most prominent and effective contend that his fine print, The Limestone Rock,
members of the Society of Graver-Printers in Colour, reproduced here, is distinguished among the best
Of his admirable colour-prints from a series of original wood-engraving of our time by not only
wood-blocks in the Japanese manner I had its pictorial qualities, its design, its well-balanced
occasion to speak in these pages last year, when masses of tone, but by the expressive manner in
some of them were reproduced (The Studio, which the material has been used, the absolute
May 1913); but Mr. Lee is not content to handle eloquence of the wood itself in terms of black-and-
the wood only for the purposes of colour-impressions, white. Mr. Lee realises that when the artist does
he is an original wood-engraver in the fine tradition his own cutting, as of course he should do, the
of Bewick, and the black-and-white woodcuts he capabilities of the box-wood block, cut on end of
has already produced may be regarded as notable the grain, are for original expression very great,
factors in the interest awakened in the revival of If these be properly understood a result may be pro-
wood-engraving as a vehicle for original expression, duced which is absolutely peculiar to the material—
Among the varied activities of the graphic arts in a result that could not be imitated or achieved in
England to-day this revival has attracted a certain the same way by any other process whatever,
amount of attention, mainly through the beautiful, In The Limestone Rock this claim for the wood-
original and poetic work of Mr. Charles Ricketts, Mr. block is admirably exemplified. It could not be a
Charles Shannon, and Mr. Sturge Moore, most of drawing, or a mere reproduction of a drawing,
which has been done with the view to book-decora- It could, in fact, have been produced only from
tion. The movement grew out of the gradual wood-blocks cut by the artist himself, with full
decline of reproductive wood-engraving, which, understanding of his material and what can be
—leaving behind it the splendid triumphs of the got out of it. The actual workmanship and
eighteen-sixties, when great illustrative artists were method of work are so intimately bound up with
content to draw upon the block for such excellent the design itself that they could not have been
engravers as Swain, the
Dalziels, Hooper and
Linton to treat with artis-
tically sympathetic crafts-
manship—was gradually
ousted, through the
exigencies of the periodical
press, by the photographic
process plate. But with
artists of originality eager
for vehicles of expres-
sion, it was not likely
that the venerable craft of
wood-engraving should be
allowed to fall into disuse
in this country, especially
with the noble example of
Auguste Lepere in France ;
so the material that served
immortally the genius of
Diirer, Lucas Van Leyden " Spanish mill." from an original wood-engraving by Sydney lee, a. r.e.