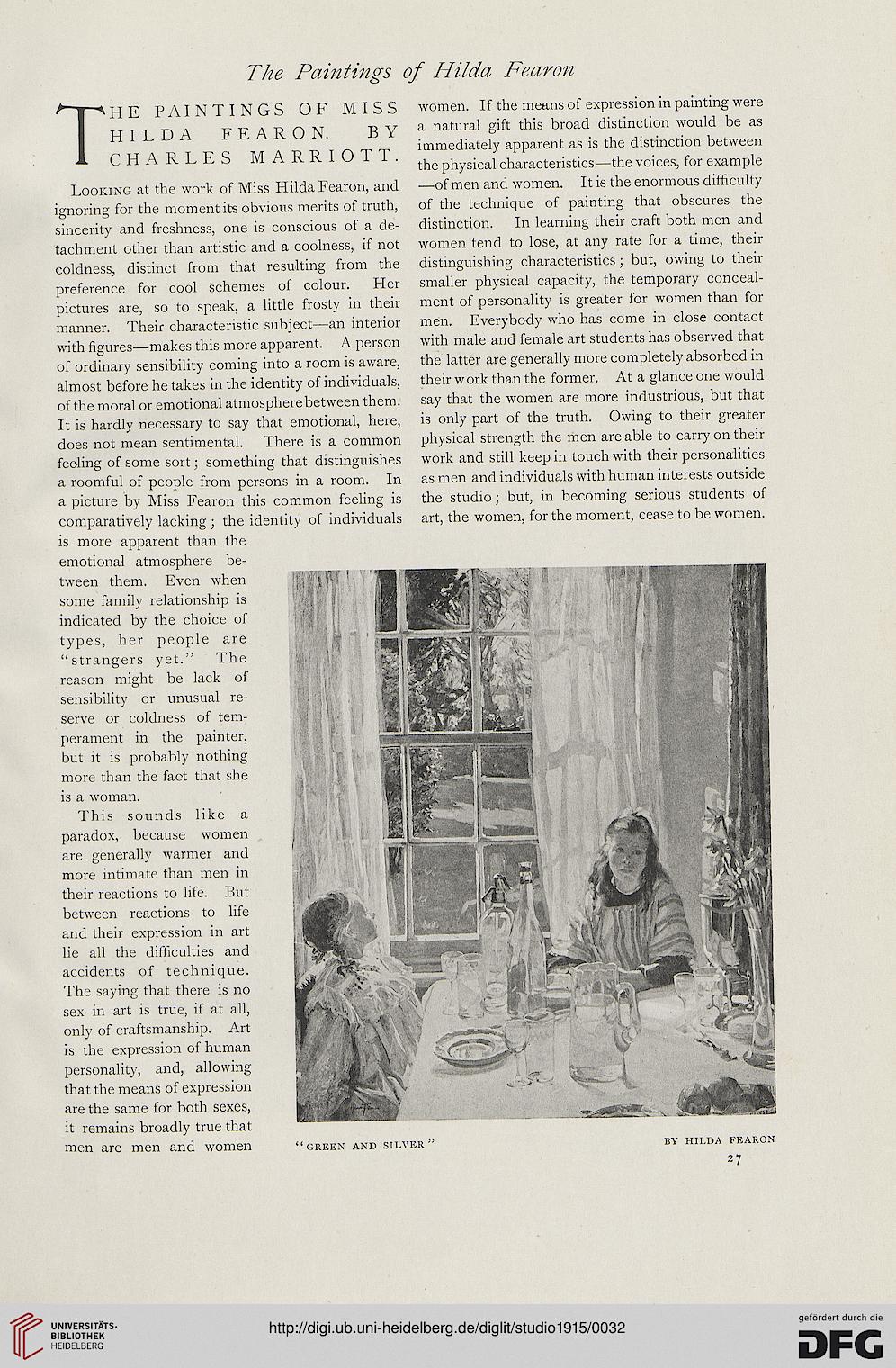 THE PAINTINGS OF MISS women. If the means of expression in painting were
HILDA FEARON BY a natural gift this broad distinction would be as
^tta t>t t- c- tvt a t> t) t /~\ t* t* immediately apparent as is the distinction between
CHAKl^rLbMAKKlUll. . . . , , .. . . , ,

Looking at the work of Miss Hilda Fearon, and —of men and women. It is the enormous difficulty
ignoring for the moment its obvious merits of truth, of the technique of painting that obscures the
sincerity and freshness, one is conscious of a de- distinction. In learning their craft both men and
tachment other than artistic and a coolness, if not women tend to lose, at any rate for a time, their
coldness, distinct from that resulting from the distinguishing characteristics; but, owing to their
preference for cool schemes of colour. Her smaller physical capacity, the temporary conceal-
pictures are, so to speak, a little frosty in their ment of personality is greater for women than for
manner. Their characteristic subject—an interior men. Everybody who has come in close contact
with figures—makes this more apparent. A person with male and female art students has observed that
of ordinary sensibility coming into a room is aware, the latter are generally more completely absorbed in
almost before he takes in the identity of individuals, their work than the former. At a glance one would
of the moral or emotional atmosphere between them, say that the women are more industrious, but that
It is hardly necessary to say that emotional, here, is only part of the truth. Owing to their greater
does not mean sentimental. There is a common physical strength the men are able to carry on their
feeling of some sort; something that distinguishes work and still keep in touch with their personalities
a roomful of people from persons in a room. In as men and individuals with human interests outside
a picture by Miss Fearon this common feeling is the studio; but, in becoming serious students of
comparatively lacking ; the identity of individuals art, the women, for the moment, cease to be women,
is more apparent than the
emotional atmosphere be-
ll er people ^l^j^^^ljJ''
"strangers yet." The
reason might be lack of
sensibility or unusual re-
serve or coldness of tem-
perament in the painter,
but it is probably nothing
more than the fact that she
is a woman.

This sounds like a
paradox, because women
are generally warmer and
more intimate than men in
their reactions to life. But
between reactions to life
and their expression in art
lie all the difficulties and
accidents of technique.
The saying that there is no
sex in art is true, if at all,
only of craftsmanship. Art
is the expression of human
personality, and, allowing

it remains broadly true that

men are men and women "green and silver" by hilda fearon