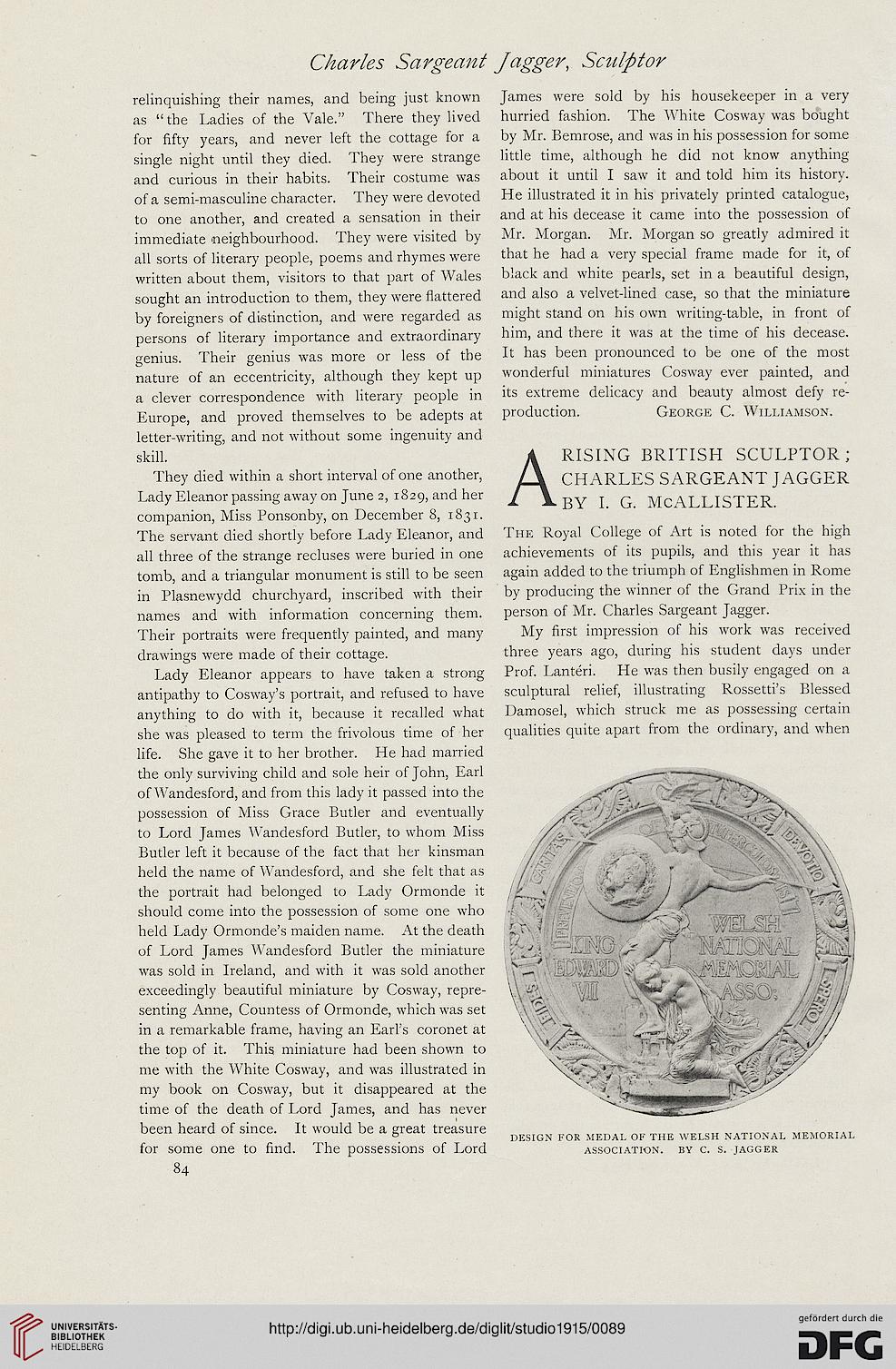 relinquishing their names, and being just known
as "the Ladies of the Vale." There they lived
for fifty years, and never left the cottage for a
single night until they died. They were strange
and curious in their habits. Their costume was
of a semi-masouline character. They were devoted
to one another, and created a sensation in their
immediate neighbourhood. They were visited by
all sorts of literary people, poems and rhymes were
written about them, visitors to that part of Wales
sought an introduction to them, they were flattered
by foreigners of distinction, and were regarded as
persons of literary importance and extraordinary
genius. Their genius was more or less of the
nature of an eccentricity, although they kept up
a clever correspondence with literary people in
Europe, and proved themselves to be adepts at
letter-writing, and not without some ingenuity and
skill.

They died within a short interval of one another,
Lady Eleanor passing away on June 2, 1829, and her
companion, Miss Ponsonby, on December 8, 1831.
The servant died shortly before Lady Eleanor, and
all three of the strange recluses were buried in one
tomb, and a triangular monument is still to be seen
in Plasnewydd churchyard, inscribed with their
names and with information concerning them.
Their portraits were frequently painted, and many
drawings were made of their cottage.

Lady Eleanor appears to have taken a strong
antipathy to Cosway's portrait, and refused to have
anything to do with it, because it recalled what
she was pleased to term the frivolous time of her
life. She gave it to her brother. He had married
the only surviving child and sole heir of John, Earl
of Wandesford, and from this lady it passed into the
possession of Miss Grace Butler and eventually
to Lord James Wandesford Butler, to whom Miss
Butler left it because of the fact that her kinsman
held the name of Wandesford, and she felt that as
the portrait had belonged to Lady Ormonde it
should come into the possession of some one who
held Lady Ormonde's maiden name. At the death
of Lord James Wandesford Butler the miniature
was sold in Ireland, and with it was sold another
exceedingly beautiful miniature by Cosway, repre-
senting Anne, Countess of Ormonde, which was set
in a remarkable frame, having an Earl's coronet at
the top of it. This miniature had been shown to
me with the White Cosway, and was illustrated in
my book on Cosway, but it disappeared at the
time of the death of Lord James, and has never
been heard of since. It would be a great treasure
for some one to find. The possessions of Lord
84

James were sold by his housekeeper in a very
hurried fashion. The White Cosway was bought
by Mr. Bemrose, and was in his possession for some
little time, although he did not know anything
about it until I saw it and told him its history.
He illustrated it in his privately printed catalogue,
and at his decease it came into the possession of
Mr. Morgan. Mr. Morgan so greatly admired it
that he had a very special frame made for it, of
black and white pearls, set in a beautiful design,
and also a velvet-lined case, so that the miniature
might stand on his own writing-table, in front of
him, and there it was at the time of his decease.
It has been pronounced to be one of the most
wonderful miniatures Cosway ever painted, and
its extreme delicacy and beauty almost defy re-
production. George C. Williamson.

The Royal College of Art is noted for the high
achievements of its pupils, and this year it has
again added to the triumph of Englishmen in Rome
by producing the winner of the Grand Prix in the
person of Mr. Charles Sargeant Jagger.

My first impression of his work was received
three years ago, during his student days under
Prof. Lanteri. He was then busily engaged on a
sculptural relief, illustrating Rossetti's Blessed
Damosel, which struck me as possessing certain
qualities quite apart from the ordinary, and when

DESIGN FOR MEDAL OF THE WELSH NATIONAL MEMORIAL
ASSOCIATION. BY C S. JAGGER