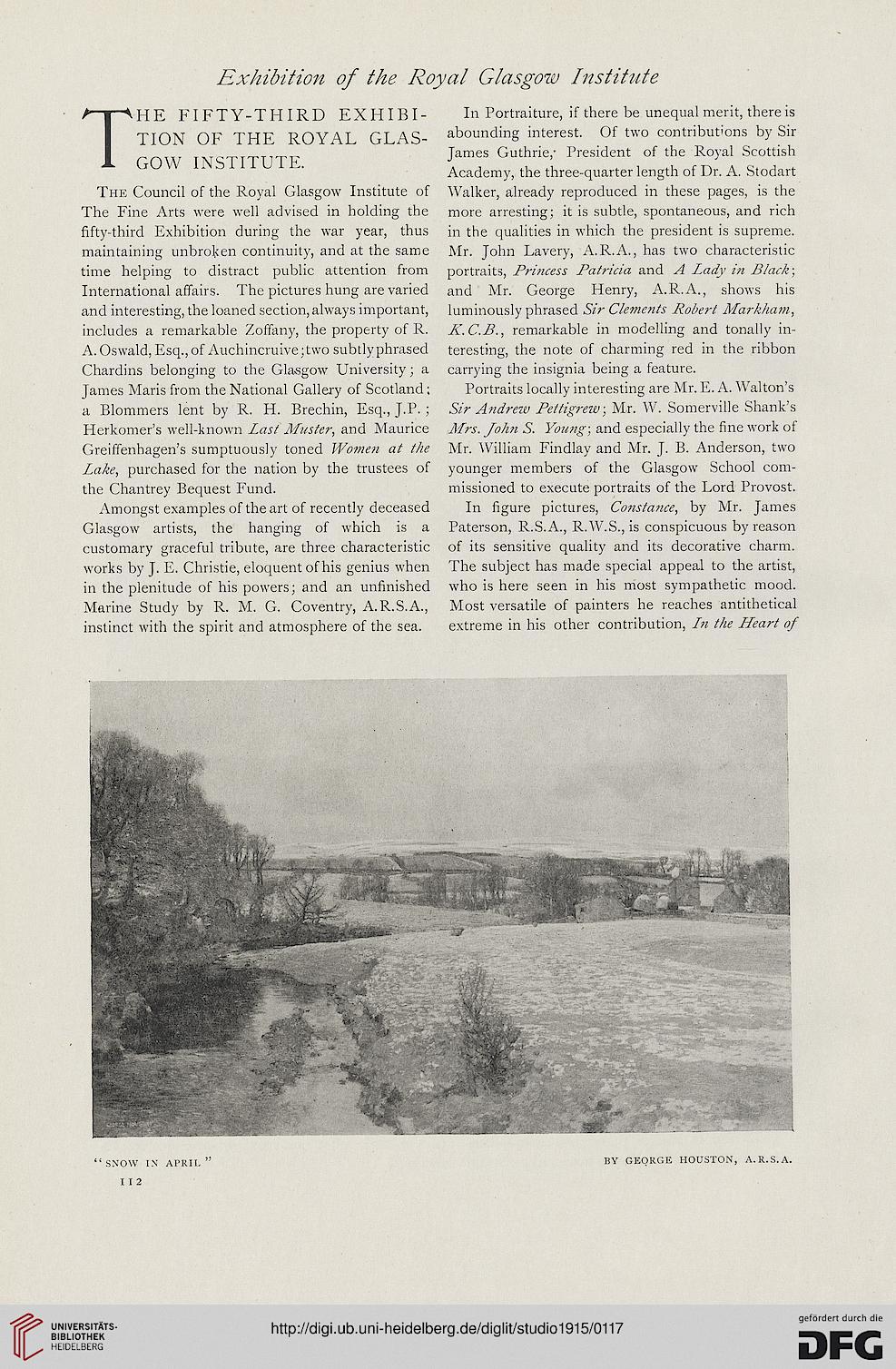 Information about OCR text
Exhibition of the Royal Glasgow Institute

HE FIFTY-THIRD EXHIBI-
TION OF THE ROYAL GLAS-
GOW INSTITUTE.

The Council of the Royal Glasgow Institute of
The Fine Arts were well advised in holding the
fifty-third Exhibition during the war year, thus
maintaining unbroken continuity, and at the same
time helping to distract public attention from
International affairs. The pictures hung are varied
and interesting, the loaned section, always important,
includes a remarkable Zoffany, the property of R.
A. Oswald, Esq., of Auchincruive;two subtly phrased
Chardins belonging to the Glasgow University; a
James Maris from the National Gallery of Scotland;
a Blommers lent by R. H. Brechin, Esq., J.P.;
Herkomer's well-known Last Muster, and Maurice
Greiffenhagen's sumptuously toned Women at the
Lake, purchased for the nation by the trustees of
the Chantrey Bequest Fund.

Amongst examples of the art of recently deceased
Glasgow artists, the hanging of which is a
customary graceful tribute, are three characteristic
works by J. E. Christie, eloquent of his genius when
in the plenitude of his powers; and an unfinished
Marine Study by R. M. G. Coventry, A.R.S.A.,
instinct with the spirit and atmosphere of the sea.

In Portraiture, if there be unequal merit, there is
abounding interest. Of two contributions by Sir
James Guthrie,- President of the Royal Scottish
Academy, the three-quarter length of Dr. A. Stodart
Walker, already reproduced in these pages, is the
more arresting; it is subtle, spontaneous, and rich
in the qualities in which the president is supreme.
Mr. John Lavery, A.R.A., has two characteristic
portraits, Princess Patricia and A Lady in Black;
and Mr. George Henry, A.R.A., shows his
luminously phrased Sir Clements Robert Markham,
K.C.B., remarkable in modelling and tonally in-
teresting, the note of charming red in the ribbon
carrying the insignia being a feature.

In figure pictures, Constance, by Mr. James
Paterson, R.S.A., R.W.S., is conspicuous by reason
of its sensitive quality and its decorative charm.
The subject has made special appeal to the artist,
who is here seen in his most sympathetic mood.
Most versatile of painters he reaches antithetical
extreme in his other contribution, Ln the Heart of