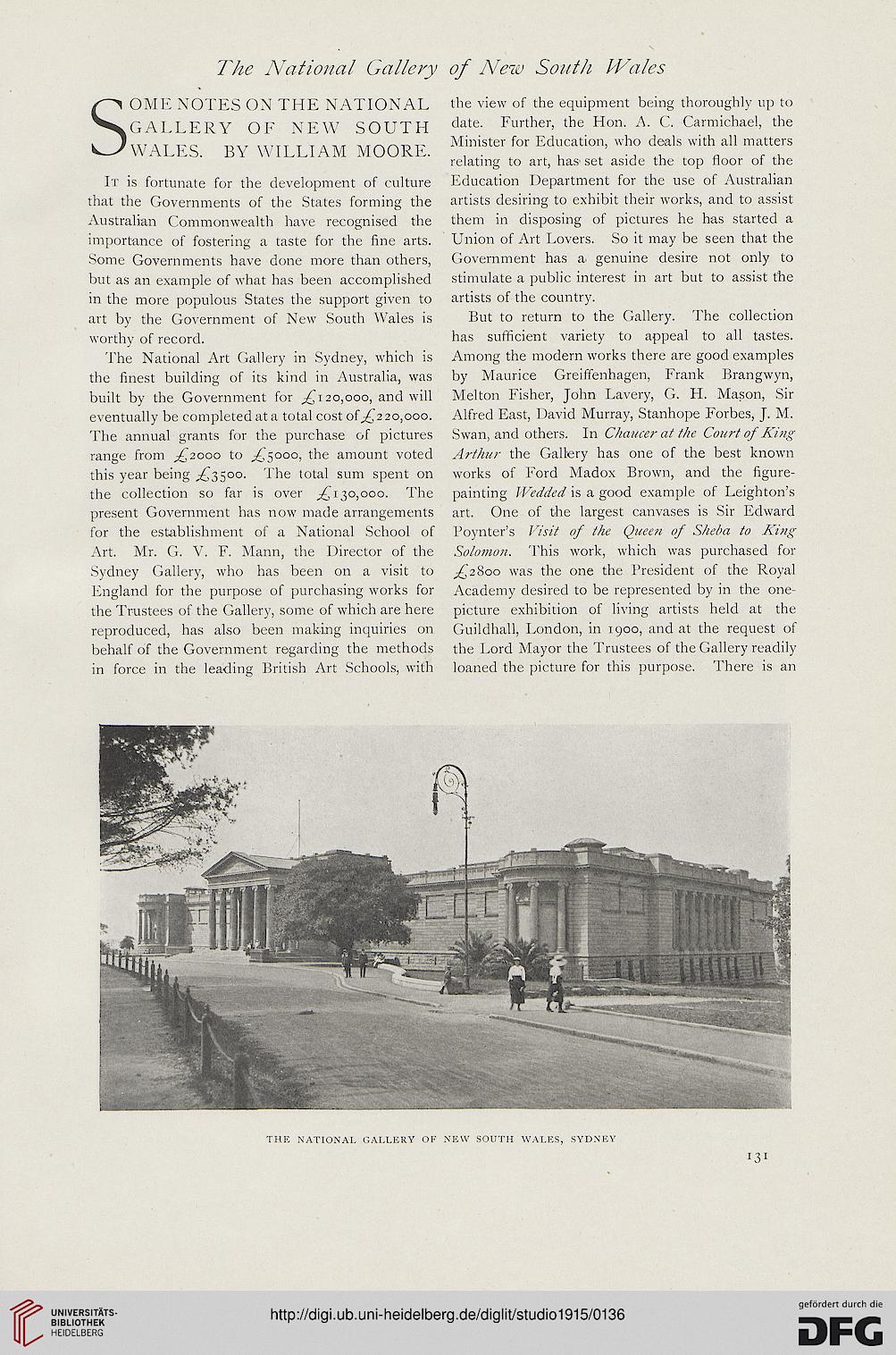 SOME NOTES ON THE NATIONAL
GALLERY OE NEW SOUTH
WALES. BY WILLIAM MOORE.

It is fortunate for the development of culture
that the Governments of the States forming the
Australian Commonwealth have recognised the
importance of fostering a taste for the fine arts.
Some Governments have done more than others,
but as an example of what has been accomplished
in the more populous States the support given to
art by the Government of New South Wales is
worthy of record.

The National Art Gallery in Sydney, which is
the finest building of its kind in Australia, was
built by the Government for ,£120,000, and will
eventually be completed ata total cost 0^^220,000.
The annual grants for the purchase of pictures
range from ^2000 to ,£5000, the amount voted
this year being .£3500. The total sum spent on
the collection so far is over ,£130,000. The
present Government has now made arrangements
for the establishment of a National School of
Art. Mr. G. V. F. Mann, the Director of the
Sydney Gallery, who has been on a visit to
England for the purpose of purchasing works for
the Trustees of the Gallery, some of which are here
reproduced, has also been making inquiries on
behalf of the Government regarding the methods
in force in the leading British Art Schools, with

the view of the equipment being thoroughly up to
date. Further, the Hon. A. C. Carmichael, the
Minister for Education, who deals with all matters
relating to art, has- set aside the top floor of the
Education Department for the use of Australian
artists desiring to exhibit their works, and to assist
them in disposing of pictures he has started a
Union of Art Eovers. So it may be seen that the
Government has a genuine desire not only to
stimulate a public interest in art but to assist the
artists of the country.

But to return to the Gallery. The collection
has sufficient variety to appeal to all tastes.
Among the modern works there are good examples
by Maurice Greiffenhagen, Frank Brangwyn,
Melton Fisher, John Lavery, G. H. Mason, Sir
Alfred East, David Murray, Stanhope Forbes, J. M.
Swan, and others. In Chaucer at the Court of King
Arthur the Gallery has one of the best known
works of Ford Madox Brown, and the figure-
painting Wedded is a good example of Leighton's
art. One of the largest canvases is Sir Edward
Poynter's Visit of the Queen of Sheba to King
Solomon. This work, which was purchased for
^,'2800 was the one the President of the Royal
Academy desired to be represented by in the one-
picture exhibition of living artists held at the
Guildhall, London, in 1900, and at the request of
the Lord Mayor the Trustees of the Gallery readily
loaned the picture for this purpose. There is an