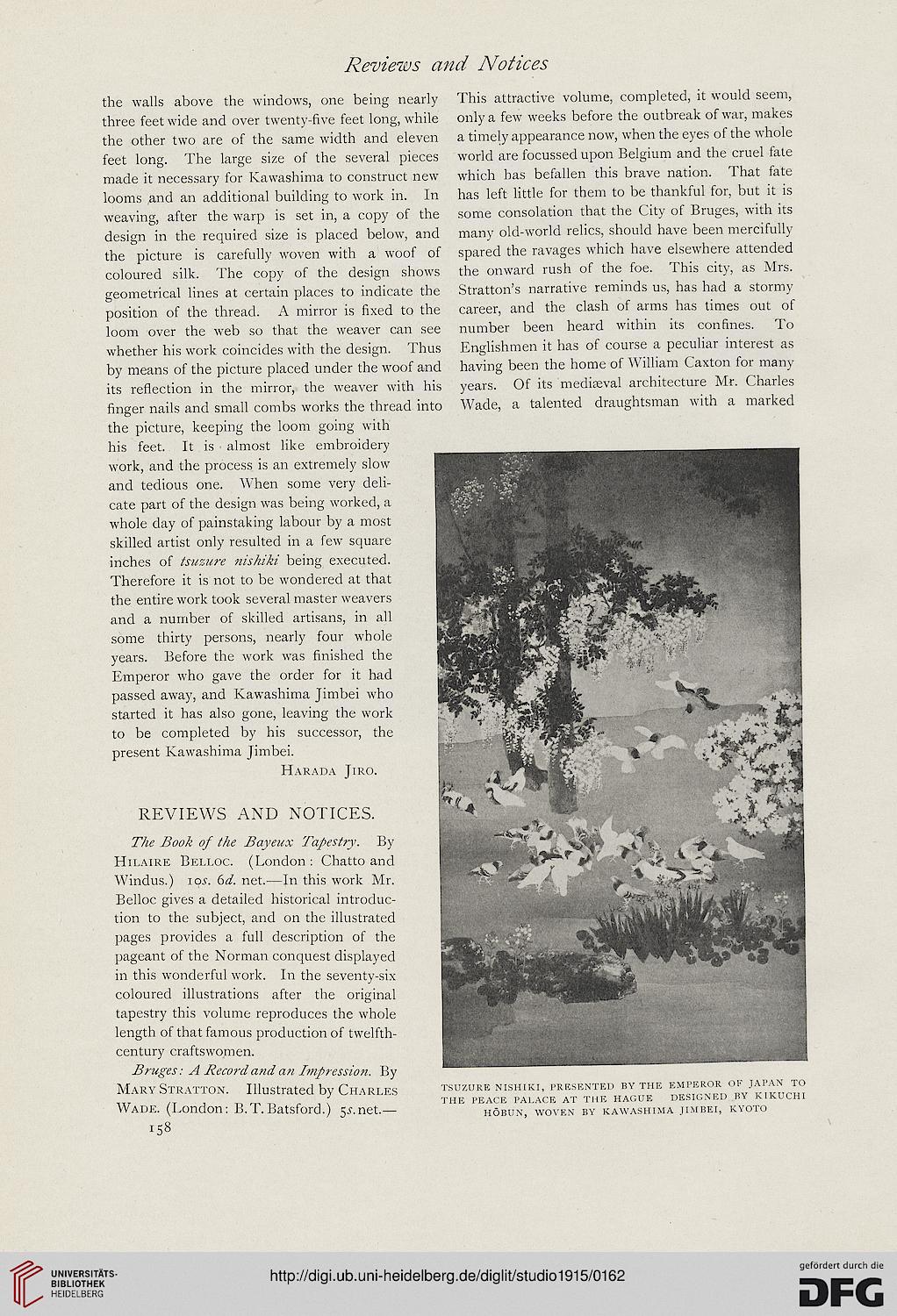 the walls above the windows, one being nearly This attractive volume, completed, it would seem,
three feet wide and over twenty-five feet long, while only a few weeks before the outbreak of war, makes
the other two are of the same width and eleven a timely appearance now, when the eyes of the whole
feet long. The large size of the several pieces world are focussed upon Belgium and the cruel fate
made it necessary for Kawashima to construct new which has befallen this brave nation. That fate
looms and an additional building to work in. In has left little for them to be thankful for, but it is
weaving, after the warp is set in, a copy of the some consolation that the City of Bruges, with its
design in the required size is placed below, and many old-world relics, should have been mercifully
the picture is carefully woven with a woof of spared the ravages which have elsewhere attended
coloured silk. The copy of the design shows the onward rush of the foe. This city, as Mrs.
geometrical lines at certain places to indicate the Stratton's narrative reminds us, has had a stormy
position of the thread. A mirror is fixed to the career, and the clash of arms has times out of
loom over the web so that the weaver can see number been heard within its confines. To
whether his work coincides with the design. Thus Englishmen it has of course a peculiar interest as
by means of the picture placed under the woof and having been the home of William Caxton for many
its reflection in the mirror, the weaver with his years. Of its mediaeval architecture Mr. Charles
finger nails and small combs works the thread into Wade, a talented draughtsman with a marked
the picture, keeping the loom going with
his feet. It is almost like embroidery
work, and the process is an extremely slow
and tedious one. When some very deli-
cate part of the design was being worked, a
whole day of painstaking labour by a most
skilled artist only resulted in a few square
inches of tsuzure nishiki being executed.
Therefore it is not to be wondered at that
the entire work took several master weavers
and a number of skilled artisans, in all
some thirty persons, nearly four whole
years. Before the work was finished the
Emperor who gave the order for it had
passed away, and Kawashima Jimbei who
started it has also gone, leaving the work
to be completed by his successor, the
present Kawashima Jimbei.

The Book of the Bayeux Tapestry. By
Hilaire Belloc. (London: Chatto and
Windus.) ioj. 6d. net.—In this work Mr.
Belloc gives a detailed historical introduc-
tion to the subject, and on the illustrated
pages provides a full description of the
pageant of the Norman conquest displayed
in this wonderful work. In the seventy-six
coloured illustrations after the original
tapestry this volume reproduces the whole
length of that famous production of twelfth-
century craftswomen.

Bruges: A Record and an Impression. By
Mary Stratton. Illustrated by Charles
Wade. (London: B.T.Batsford.) 5i-.net—
158

TSUZURE NISHIKI, PRESENTED BY THE EMPEROR OF JAPAN TO
THE PEACE PALACE AT THE HAC.UE DESIGNED BY KIKUCHI
HOBUN, WOVEN BY KAWASHIMA JIMBEI, KYOTO