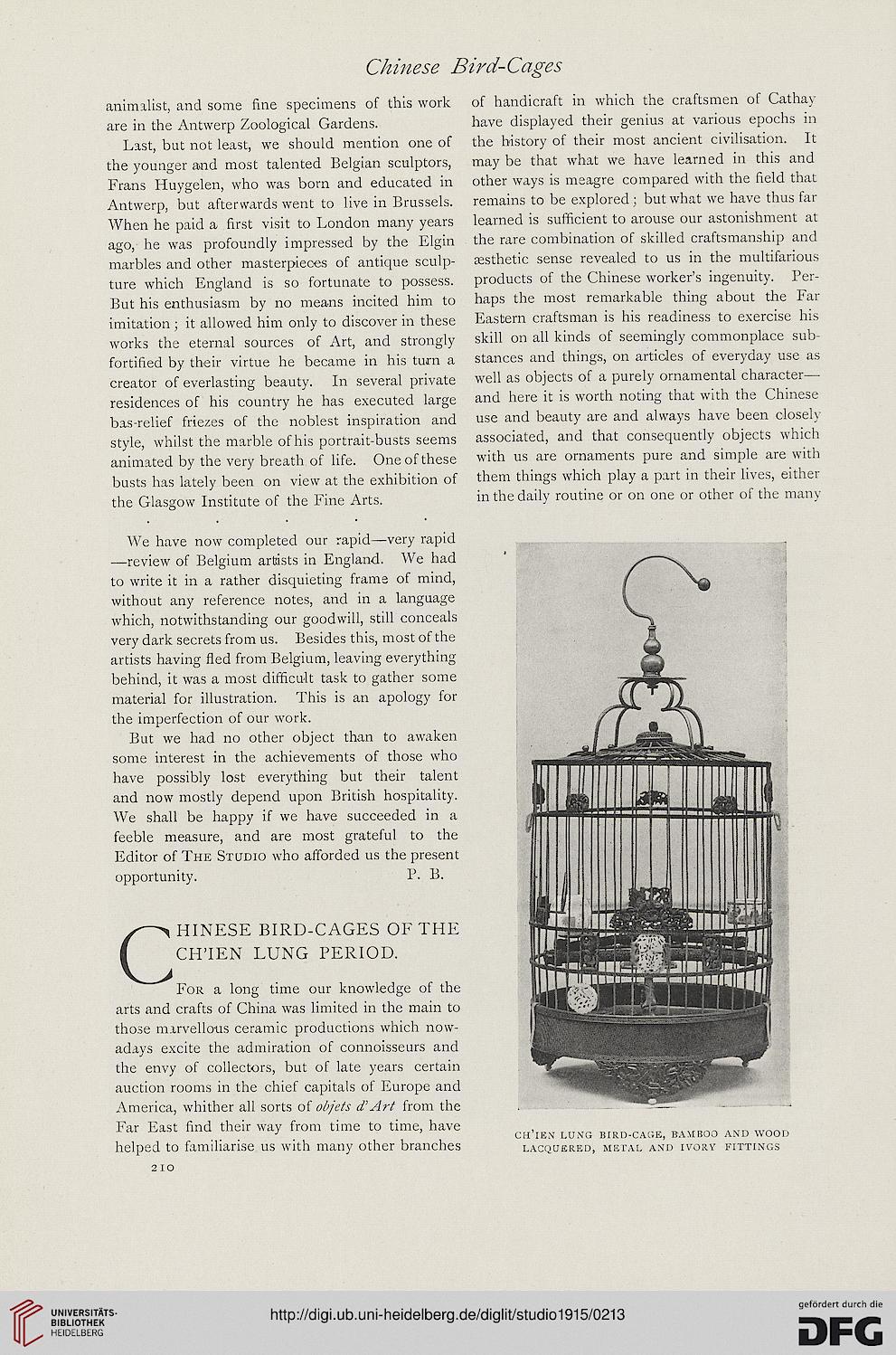 animalist, and some fine specimens of this work
are in the Antwerp Zoological Gardens.

Last, but not least, we should mention one of
the younger and most talented Belgian sculptors,
Frans Huygelen, who was born and educated in
Antwerp, but afterwards went to live in Brussels.
When he paid a first visit to London many years
ago, he was profoundly impressed by the Elgin
marbles and other masterpieces of antique sculp-
ture which England is so fortunate to possess.
But his enthusiasm by no means incited him to
imitation ; it allowed him only to discover in these
works the eternal sources of Art, and strongly
fortified by their virtue he became in his turn a
creator of everlasting beauty. In several private
residences of his country he has executed large
bas-relief friezes of the noblest inspiration and
style, whilst the marble of his portrait-busts seems
animated by the very breath of life. One of these
busts has lately been on view at the exhibition of
the Glasgow Institute of the Fine Arts.

We have now completed our rapid—very rapid
—review of Belgium artists in England. We had
to write it in a rather disquieting frame of mind,
without any reference notes, and in a language
which, notwithstanding our goodwill, still conceals
very dark secrets from us. Besides this, most of the
artists having fled from Belgium, leaving everything
behind, it was a most difficult task to gather some
material for illustration. This is an apology for
the imperfection of our work.

But we had no other object than to awaken
some interest in the achievements of those who
have possibly lost everything but their talent
and now mostly depend upon British hospitality.
We shall be happy if we have succeeded in a
feeble measure, and are most grateful to the
Editor of The Studio who afforded us the present
opportunity. P. B.

For a long time our knowledge of the
arts and crafts of China was limited in the main to
those marvellous ceramic productions which now-
adays excite the admiration of connoisseurs and
the envy of collectors, but of late years certain
auction rooms in the chief capitals of Europe and
America, whither all sorts of objets d'Art from the
Far East find their way from time to time, have
helped to familiarise us with many other branches
210

of handicraft in which the craftsmen of Cathay
have displayed their genius at various epochs in
the history of their most ancient civilisation. It
may be that what we have learned in this and
other ways is meagre compared with the field that
remains to be explored; but what we have thus far
learned is sufficient to arouse our astonishment at
the rare combination of skilled craftsmanship and
aesthetic sense revealed to us in the multifarious
products of the Chinese worker's ingenuity. Per-
haps the most remarkable thing about the Far
Eastern craftsman is his readiness to exercise his
skill on all kinds of seemingly commonplace sub-
stances and things, on articles of everyday use as
well as objects of a purely ornamental character—
and here it is worth noting that with the Chinese
use and beauty are and always have been closely
associated, and that consequently objects which
with us are ornaments pure and simple are with
them things which play a part in their lives, either
in the daily routine or on one or other of the many