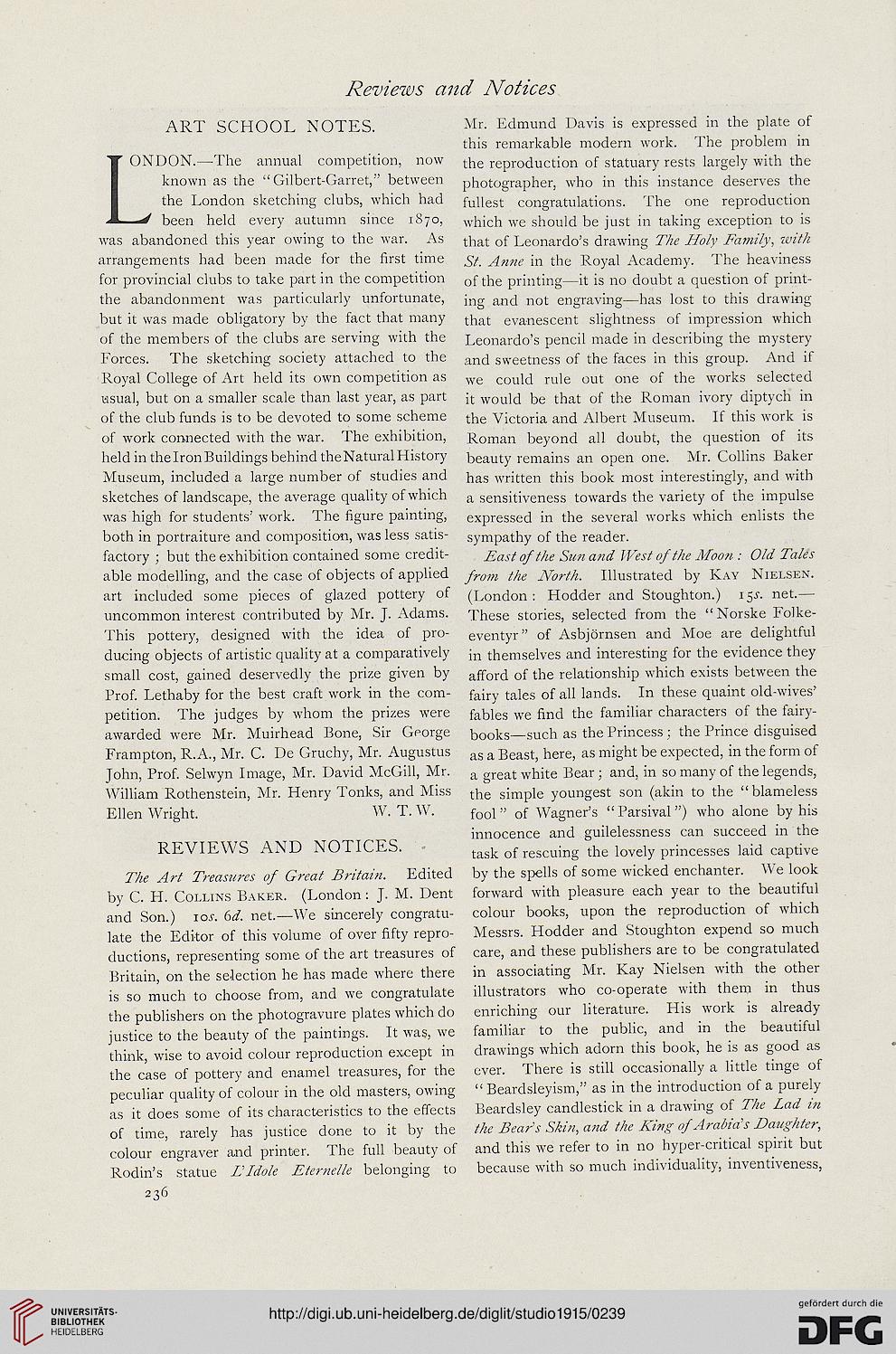 LONDON.—The annual competition, now
known as the " Gilbert-Garret," between
the London sketching clubs, which had
-J been held every autumn since 1870,
was abandoned this year owing to the war. As
arrangements had been made for the first time
for provincial clubs to take part in the competition
the abandonment was particularly unfortunate,
but it was made obligatory by the fact that many
of the members of the clubs are serving with the
Forces. The sketching society attached to the
Royal College of Art held its own competition as
usual, but on a smaller scale than last year, as part
of the club funds is to be devoted to some scheme
of work connected with the war. The exhibition,
held in the Iron Buildings behind the Natural History
Museum, included a large number of studies and
sketches of landscape, the average quality of which
was high for students' work. The figure painting,
both in portraiture and composition, was less satis-
factory ; but the exhibition contained some credit-
able modelling, and the case of objects of applied
art included some pieces of glazed pottery of
uncommon interest contributed by Mr. J. Adams.
This pottery, designed with the idea of pro-
ducing objects of artistic quality at a comparatively
small cost, gained deservedly the prize given by
Prof. Lethaby for the best craft work in the com-
petition. The judges by whom the prizes were
awarded were Mr. Muirhead Bone, Sir George
Frampton, R.A., Mr. C. De Gruchy, Mr. Augustus
John, Prof. Selwyn Image, Mr. David McGill, Mr.
William Rothenstein, Mr. Henry Tonks, and Miss
Ellen Wright. W. T. W.

The Art Treasures of Great Britain. Edited
by C. H. Collins Baker. (London : J. M. Dent
and Son.) \os. 6d. net.—We sincerely congratu-
late the Editor of this volume of over fifty repro-
ductions, representing some of the art treasures of
Britain, on the selection he has made where there
is so much to choose from, and we congratulate
the publishers on the photogravure plates which do
justice to the beauty of the paintings. It was, we
think, wise to avoid colour reproduction except in
the case of pottery and enamel treasures, for the
peculiar quality of colour in the old masters, owing
as it does some of its characteristics to the effects
of time, rarely has justice done to it by the
colour engraver and printer. The full beauty of
Rodin's statue L'Idole Eternelle belonging to
236

Mr. Edmund Davis is expressed in the plate of
this remarkable modern work. The problem in
the reproduction of statuary rests largely with the
photographer, who in this instance deserves the
fullest congratulations. The one reproduction
which we should be just in taking exception to is
that of Leonardo's drawing The Holy Family, with
St. Anne in the Royal Academy. The heaviness
of the printing—it is no doubt a question of print-
ing and not engraving—has lost to this drawing
that evanescent slightness of impression which
Leonardo's pencil made in describing the mystery
and sweetness of the faces in this group. And if
we could rule out one of the works selected
it would be that of the Roman ivory diptych in
the Victoria and Albert Museum. If this work is
Roman beyond all doubt, the question of its
beauty remains an open one. Mr. Collins Baker
has written this book most interestingly, and with
a sensitiveness towards the variety of the impulse
expressed in the several works which enlists the
sympathy of the reader.

East of the Sun and West of the Moon : Old Tales
from the North. Illustrated by Kay Nielsen.
(London: Hodder and Stoughton.) 15.?. net.—
These stories, selected from the " Norske Folke-
eventyr" of Asbjornsen and Moe are delightful
in themselves and interesting for the evidence they
afford of the relationship which exists between the
fairy tales of all lands. In these quaint old-wives'
fables we find the familiar characters of the fairy-
books—such as the Princess ; the Prince disguised
as a Beast, here, as might be expected, in the form of
a great white Bear ; and, in so many of the legends,
the simple youngest son (akin to the "blameless
fool" of Wagner's " Parsival") who alone by his
innocence and guilelessness can succeed in the
task of rescuing the lovely princesses laid captive
by the spells of some wicked enchanter. We look
forward with pleasure each year to the beautiful
colour books, upon the reproduction of which
Messrs. Hodder and Stoughton expend so much
care, and these publishers are to be congratulated
in associating Mr. Kay Nielsen with the other
illustrators who co-operate with them in thus
enriching our literature. His work is already
familiar to the public, and in the beautiful
drawings which adorn this book, he is as good as
ever. There is still occasionally a little tinge of
" Beardsleyism," as in the introduction of a purely
Beardsley candlestick in a drawing of The Lad in
the Bear's Skin, and the King of Arabia's Daughter,
and this we refer to in no hyper-critical spirit but
because with so much individuality, inventiveness,