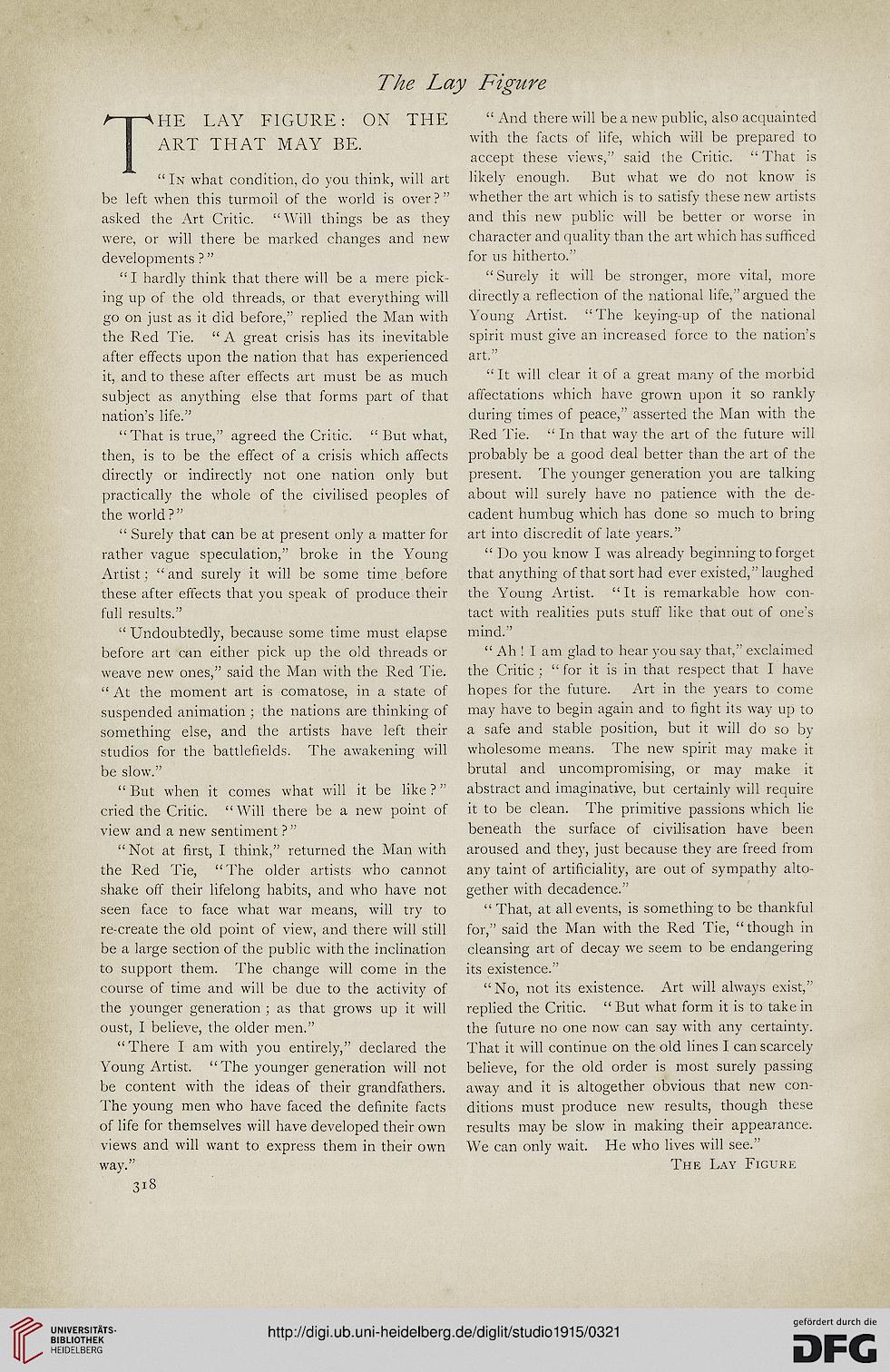 THE LAY FIGURE: ON THE
ART THAT MAY BE.

" In what condition, do you think, will art
be left when this turmoil of the world is over?"
asked the Art Critic. "Will things be as they
were, or will there be marked changes and new
developments ? "

" I hardly think that there will be a mere pick-
ing up of the old threads, or that everything will
go on just as it did before," replied the Man with
the Red Tie. " A great crisis has its inevitable
after effects upon the nation that has experienced
it, and to these after effects art must be as much
subject as anything else that forms part of that
nation's life."

"That is true," agreed the Critic. " But what,
then, is to be the effect of a crisis which affects
directly or indirectly not one nation only but
practically the whole of the civilised peoples of
the world?"

" Surely that can be at present only a matter for
rather vague speculation," broke in the Young
Artist; "and surely it will be some time before
these after effects that you speak of produce their
full results."

" Undoubtedly, because some time must elapse
before art can either pick up the old threads or
weave new ones," said the Man with the Red Tie.
" At the moment art is comatose, in a state of
suspended animation ; the nations are thinking of
something else, and the artists have left their
studios for the battlefields. The awakening will
be slow."

"But when it comes what will it be like?"
cried the Critic. "Will there be a new point of
view and a new sentiment ?"

" Not at first, I think," returned the Man with
the Red Tie, " The older artists who cannot
shake off their lifelong habits, and who have not
seen face to face what war means, will try to
re-create the old point of view, and there will still
be a large section of the public with the inclination
to support them. The change will come in the
course of time and will be due to the activity of
the younger generation ; as that grows up it will
oust, I believe, the older men."

"There I am with you entirely," declared the
Young Artist. "The younger generation will not
be content with the ideas of their grandfathers.
The young men who have faced the definite facts
of life for themselves will have developed their own
views and will want to express them in their own
way."
3i8

" And there will be a new public, also acquainted
with the facts of life, which will be prepared to
accept these views," said the Critic. " That is
likely enough. But what we do not know is
whether the art which is to satisfy these new artists
and this new public will be better or worse in
character and quality than the art which has sufficed
for us hitherto."

" Surely it will be stronger, more vital, more
directly a reflection of the national life," argued the
Young Artist. " The keying-up of the national
spirit must give an increased force to the nation's
art,"

" It will clear it of a great many of the morbid
affectations which have grown upon it so rankly
during times of peace," asserted the Man with the
Red Tie. " In that way the art of the future will
probably be a good deal better than the art of the
present. The younger generation you are talking
about will surely have no patience with the de-
cadent humbug which has done so much to bring
art into discredit of late years."

" Do you know I was already beginning to forget
that anything of that sort had ever existed," laughed
the Young Artist. "It is remarkable how con-
tact with realities puts stuff like that out of one's
mind."

" Ah ! I am glad to hear you say that," exclaimed
the Critic ; " for it is in that respect that I have
hopes for the future. Art in the years to come
may have to begin again and to fight its way up to
a safe and stable position, but it will do so by-
wholesome means. The new spirit may make it
brutal and uncompromising, or may make it
abstract and imaginative, but certainly will require
it to be clean. The primitive passions which lie
beneath the surface of civilisation have been
aroused and they, just because they are freed from
any taint of artificiality, are out of sympathy alto-
gether with decadence."

" That, at all events, is something to be thankful
for," said the Man with the Red Tie, "though in
cleansing art of decay we seem to be endangering
its existence."

" No, not its existence. Art will always exist,"
replied the Critic. " But what form it is to take in
the future no one now can say with any certainty.
That it will continue on the old lines I can scarcely
believe, for the old order is most surely passing
away and it is altogether obvious that new con-
ditions must produce new results, though these
results may be slow in making their appearance.
We can only wait. He who lives will see."