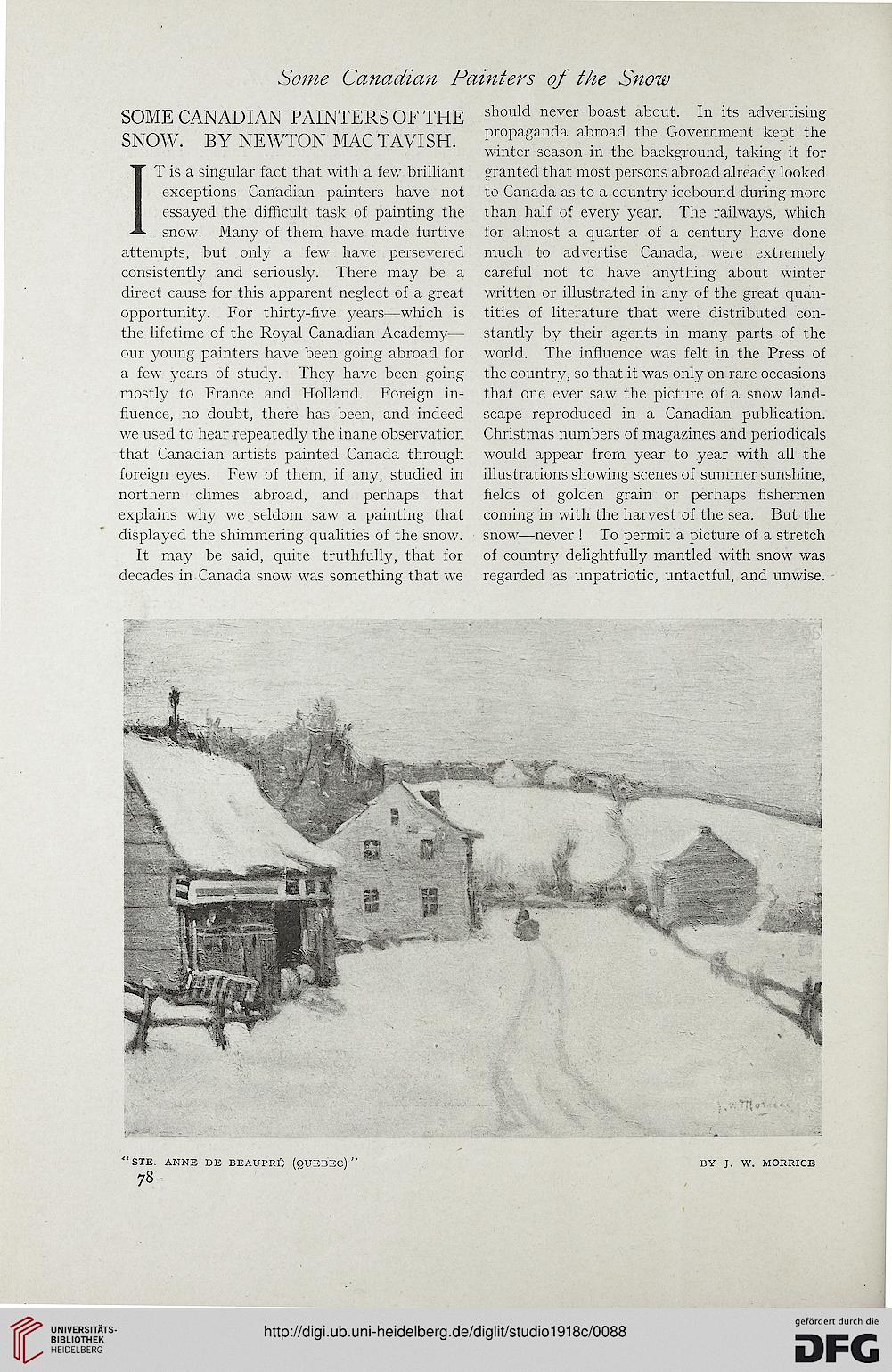 Hinweise zum OCR-Text
Some Canadian Painters of the Snow

SOME CANADIAN PAINTERS OF THE
SNOW. BY NEWTON MAC TAVISH.

IT is a singular fact that with a few brilliant
exceptions Canadian painters have not
essayed the difficult task of painting the
snow. Many of them have made furtive
attempts, but only a few have persevered
consistently and seriously. There may be a
direct cause for this apparent neglect of a great
opportunity. For thirty-five years—which is
the lifetime of the Royal Canadian Academy—
our young painters have been going abroad for
a few years of study. They have been going
mostly to France and Holland. Foreign in-
fluence, no doubt, there has been, and indeed
we used to hear repeatedly the inane observation
that Canadian artists painted Canada through
foreign eyes. Few of them, if any, studied in
northern climes abroad, and perhaps that
explains why we seldom saw a painting that
displayed the shimmering qualities of the snow.

It may be said, quite truthfully, that for
decades in Canada snow was something that we

should never boast about. In its advertising
propaganda abroad the Government kept the
winter season in the background, taking it for
granted that most persons abroad already looked
to Canada as to a country icebound during more
than half of every year. The railways, which
for almost a quarter of a century have done
much to advertise Canada, were extremely
careful not to have anything about winter
written or illustrated in any of the great quan-
tities of literature that were distributed con-
stantly by their agents in many parts of the
world. The influence was felt in the Press of
the country, so that it was only on rare occasions
that one ever saw the picture of a snow land-
scape reproduced in a Canadian publication.
Christmas numbers of magazines and periodicals
would appear from year to year with all the
illustrations showing scenes of summer sunshine,
fields of golden grain or perhaps fishermen
coming in with the harvest of the sea. But the
snow—never ! To permit a picture of a stretch
of country delightfully mantled with snow was
regarded as unpatriotic, untactful, and unwise.