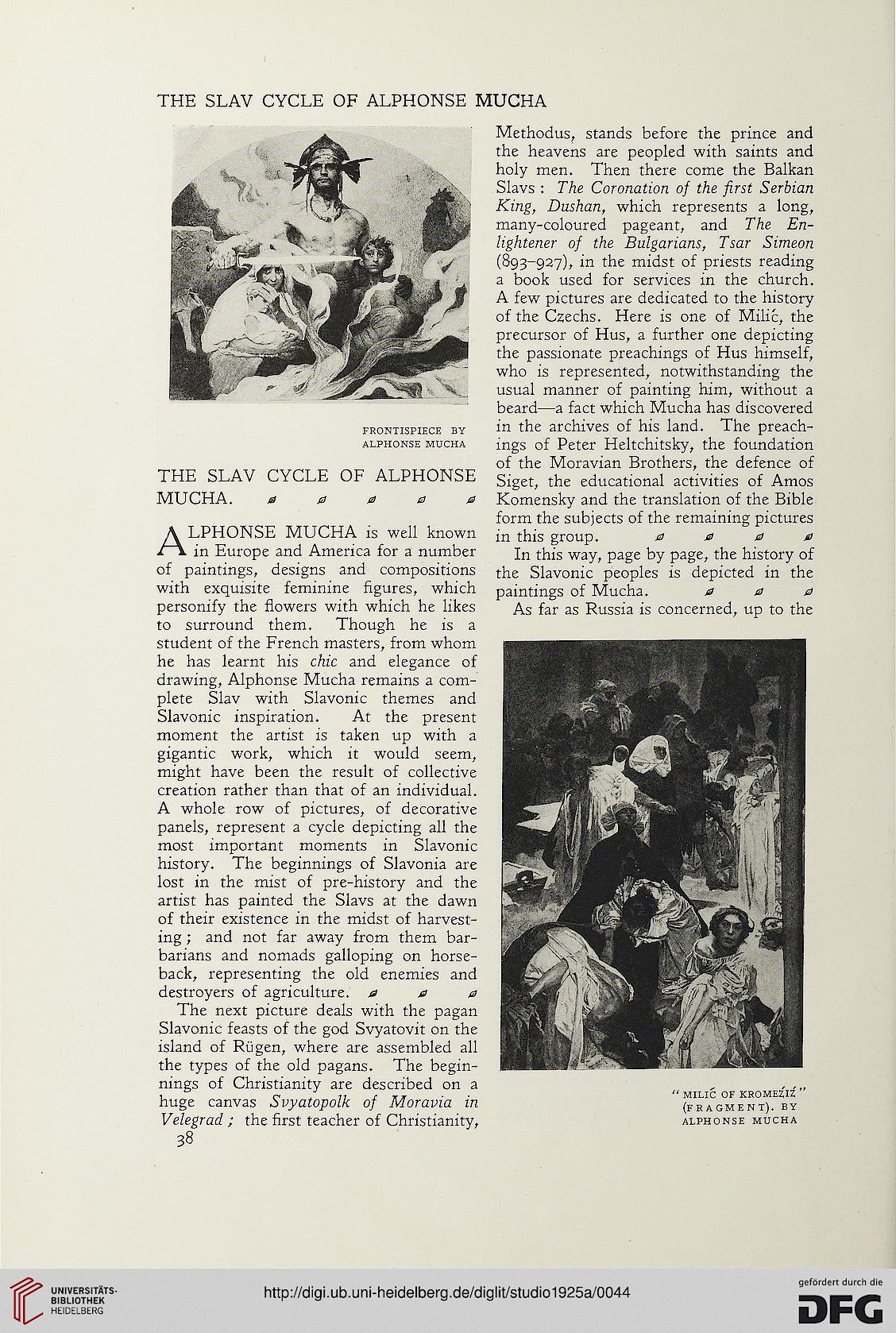 Information about OCR text
THE SLAV CYCLE OF ALPHONSE MUCHA

ALPHONSE MUCHA is well known
in Europe and America for a number
of paintings, designs and compositions
with exquisite feminine figures, which
personify the flowers with which he likes
to surround them. Though he is a
student of the French masters, from whom
he has learnt his chic and elegance of
drawing, Alphonse Mucha remains a com-
plete Slav with Slavonic themes and
Slavonic inspiration. At the present
moment the artist is taken up with a
gigantic work, which it would seem,
might have been the result of collective
creation rather than that of an individual.
A whole row of pictures, of decorative
panels, represent a cycle depicting all the
most important moments in Slavonic
history. The beginnings of Slavonia are
lost in the mist of pre-history and the
artist has painted the Slavs at the dawn
of their existence in the midst of harvest-
ing ; and not far away from them bar-
barians and nomads galloping on horse-
back, representing the old enemies and
destroyers of agriculture. 000
The next picture deals with the pagan
Slavonic feasts of the god Svyatovit on the
island of Riigen, where are assembled all
the types of the old pagans. The begin-
nings of Christianity are described on a
huge canvas Svyatopolk of Moravia in
Velegrad ; the first teacher of Christianity,
38

Methodus, stands before the prince and
the heavens are peopled with saints and
holy men. Then there come the Balkan
Slavs : The Coronation of the first Serbian
King, Dushan, which represents a long,
many-coloured pageant, and The En-
lightener of the Bulgarians, Tsar Simeon
(893-927), in the midst of priests reading
a book used for services in the church.
A few pictures are dedicated to the history
of the Czechs. Here is one of Mike, the
precursor of Hus, a further one depicting
the passionate preachings of Hus himself,
who is represented, notwithstanding the
usual manner of painting him, without a
beard—a fact which Mucha has discovered
in the archives of his land. The preach-
ings of Peter Heltchitsky, the foundation
of the Moravian Brothers, the defence of
Siget, the educational activities of Amos
Komensky and the translation of the Bible
form the subjects of the remaining pictures
in this group. 0000

In this way, page by page, the history of
the Slavonic peoples is depicted in the
paintings of Mucha. 000

As far as Russia is concerned, up to the