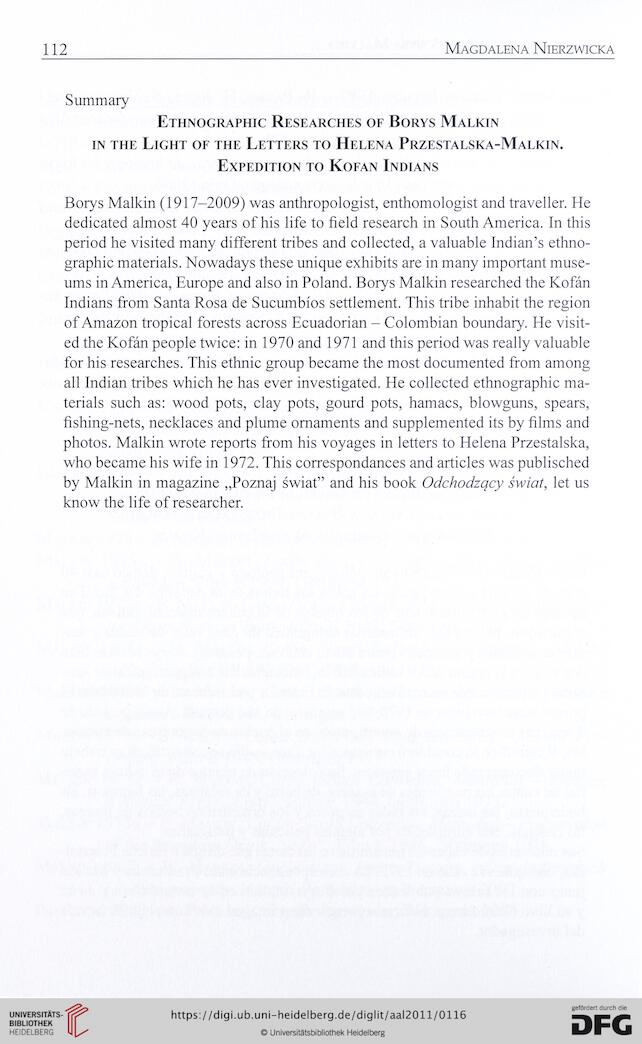 Summary
Ethnographic Researches of Borys Malkin
in the Light of the Letters to Helena Przestalska-Malkin.
Expedition to Kofan Indians
Borys Malkin (1917-2009) was anthropologist, enthomologist and traveller. He
dedicated almost 40 years of his life to field research in South America. In this
period he visited many different tribes and collected, a valuable Indian’s ethno-
graphic materials. Nowadays these unique exhibits are in many important muse-
ums in America, Europe and also in Poland. Borys Malkin researched the Kofán
Indians from Santa Rosa de Sucumbios settlement. This tribe inhabit the region
of Amazon tropical forests across Ecuadorian - Colombian boundary. He visit-
ed the Kofán people twice: in 1970 and 1971 and this period was really valuable
for his researches. This ethnic group became the most documented from among
all Indian tribes which he has ever investigated. He collected ethnographic ma-
terials such as: wood pots, clay pots, gourd pots, hamacs, blowguns, spears,
fishing-nets, necklaces and plume ornaments and supplemented its by films and
photos. Malkin wrote reports from his voyages in letters to Helena Przestalska,
who became his wife in 1972. This correspondances and articles was publisched
by Malkin in magazine „Poznaj świat” and his book Odchodzący świat, let us
know the life of researcher.