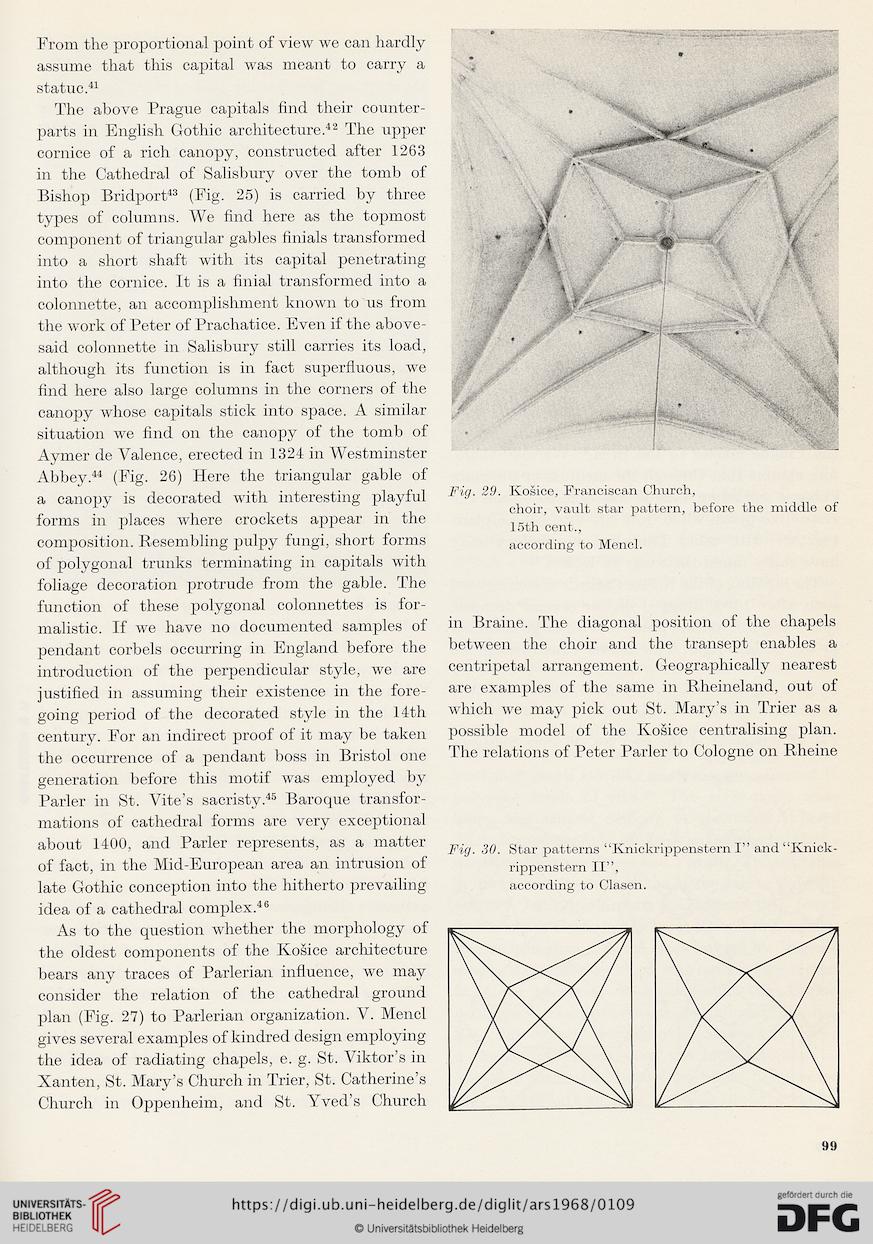 Information about OCR text
From the proportional point of view we can hardly
assume that this capital was meant to carry a
statue.41
The above Prague capitals find their counter-
parts in English Gothic architecture.42 The upper
cornice of a rich canopy, constructed after 1263
in the Cathédral of Salisbury over the tomb of
Bishop Bridport43 (Fig. 25) is carried by three
types of columns. We find here as the topmost
component of triangulär gables finials transformed
into a short shaft with its capital penetrating
into the cornice. It is a finial transformed into a
colonnette, an accomplishment known tous from
the work of Peter of Prachatice. Even if the above-
said colonnette in Salisbury still carries its load,
although its fonction is in fact superfluous, we
find here also large columns in the corners of the
canopy whose capitals stick into space. A similar
situation we find on the canopy of the tomb of
Aymer de Valence, erected in 1324 in Westminster
Abbey.44 (Fig. 26) Here the triangular gable of
a canopy is decorated with interesting playful
forms in places where crockets appear in the
composition. Resembling pulpy fungi, short forms
of polygonal trunks terminating in capitals with
foliage décoration protrude from the gable. The
function of these polygonal colonnettes is for-
malistic. If we have no documented samples of
pendant corbels occurring in England before the
introduction of the perpendicular style, we are
justified in assuming their existence in the fore-
going period of the decorated style in the 14th
Century. For an indirect proof of it may be taken
the occurrence of a pendant boss in Bristol one
génération before this motif was employed by
Parier in St. Vite’s sacristy.45 Baroque transfor-
mations of cathédral forms are very exceptional
about 1400, and Parler represents, as a matter
of fact, in the Mid-European area an intrusion of
late Gothic conception into the hitherto prevailing
idea of a cathédral complex.46
As to the question whether the morphology of
the oldest components of the Košice architecture
bears any traces of Parlerian influence, we may
consider the relation of the cathédral ground
plan (Fig. 27) to Parlerian Organization. V. Mencl
gives several examples of kindred design employing
the idea of radiating chapels, e. g. St. Viktor’s in
Xanten, St. Mary’s Church in Trier, St. Catherine’s
Church in Oppenheim, and St. Yved’s Church

in Braine. The diagonal position of the chapels
between the choir and the transept enables a
centripetal arrangement. Geographically nearest
are examples of the same in Rheineland, out of
which we may pick out St. Mary’s in Trier as a
possible model of the Košice centralising plan.
The relations of Peter Parier to Cologne on Rheine

Fig. 30. Star patterns “Knickrippenstern I” and “Knick-
rippenstern II”,
according to Clasen.