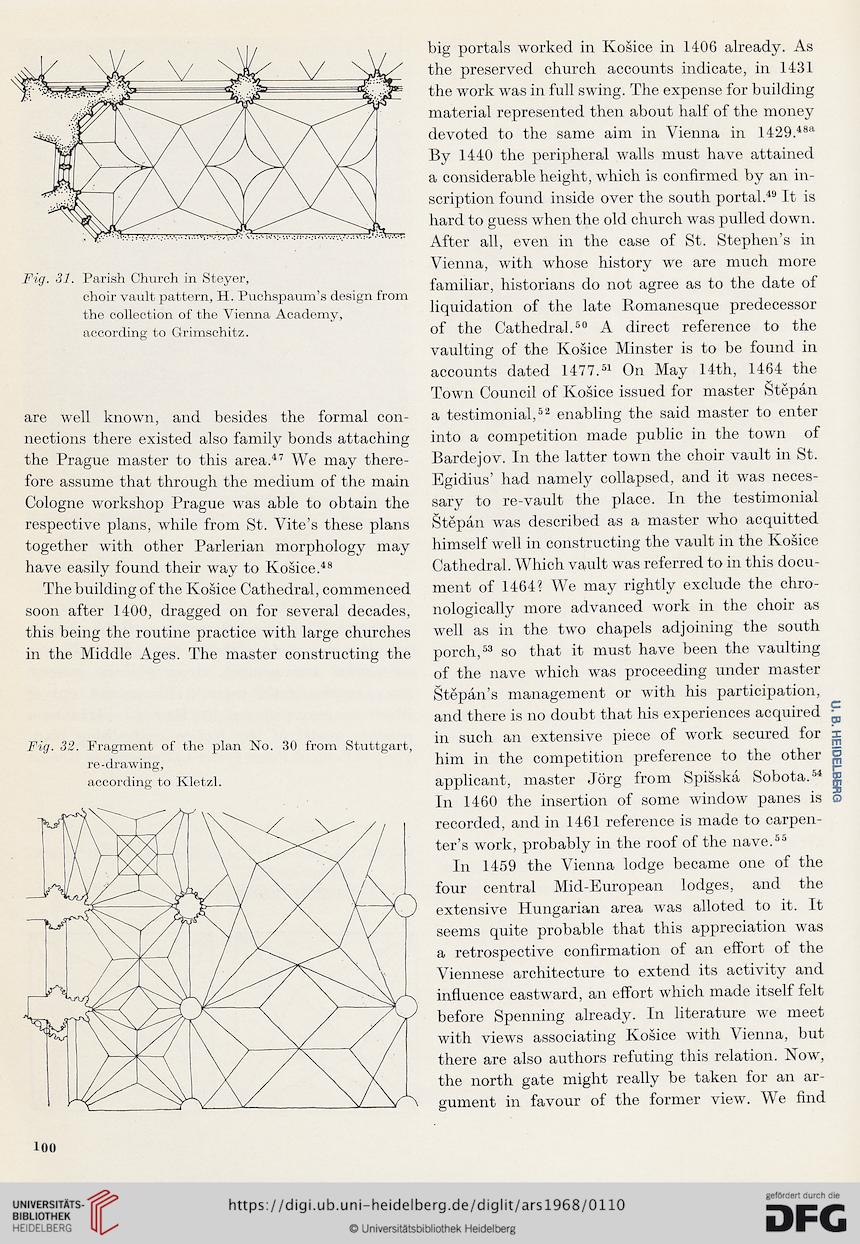 Fig. 31. Parish Church in Steyer,
choir vault pattern, H. Puchspaum’s design from
the collection of the Vienna Academy,
according to Grimschitz.

are well known, and besides the formal con-
nections there existed also family bonds attaching
the Prague master to this area.47 We may there-
fore assume that through the medium of the main
Cologne workshop Prague was able to obtain the
respective plans, while from St. Vite’s these plans
together with other Parlerian morphology may
háve easily found their way to Košice.48
The building of the Košice Cathédral, commenced
soon after 1400, dragged on for several decades,
this being the routine practice with large churches
in the Middle Ages. The master constructing the

Fig. 32. Fragment of the plan No. 30 from Stuttgart,
re-drawing,
according to Kletzl.


big portais worked in Košice in 1406 already. As
the preserved church accounts indicate, in 1431
the work was in full swing. The expense for building
material represented then about half of the money
devoted to the same aim in Vienna in 1429.48a
By 1440 the peripheral walls must have attained
a considérable height, which is confirmed by an in-
scription found inside over the south portal.49 It is
hard to guess when the old church was pulled down.
After all, even in the case of St. Stephen’s in
Vienna, with whose history we are much more
familiär, historians do not agréé as to the date of
liquidation of the late Romanesque predecessor
of the Cathédral.5 u A direct reference to the
vaulting of the Košice Minster is to be found in
accounts dated 1477.51 On May 14th, 1464 the
Town Council of Košice issued for master Štěpán
a testimonial,52 enabling the said master to enter
into a compétition made public in the town of
Bardejov. In the latter town the choir vault in St.
Egidius’ had námely collapsed, and it was neces-
sary to re-vault the place. In the testimonial
Štěpán was described as a master who acquitted
himself well in constructing the vault in the Košice
Cathédral. Which vault was referred to in this docu-
ment of 1464? We may rightly exclude the chro-
nologically more advanced work in the choir as
well as in the two chapels adjoining the south
porch,53 so that it must have been the vaulting
of the nave which was proceeding under master
Stëpàn’s management or with his participation,
and there is no doubt that his expériences acquired
in such an extensive piece of work secured for
him in the compétition preference to the other
applicant, master Jörg from Spišská Sobota.64
In 1460 the insertion of some window panes is
recorded, and in 1461 reference is made to carpen-
ter’s work, probably in the roof of the nave.55
In 1459 the Vienna lodge became one of the
four central Mid-European lodges, and the
extensive Hungarian area was alloted to it. It
seems quite probable that this appréciation was
a rétrospective confirmation of an effort of the
Viennese architecture to extend its activity and
influence eastward, an effort which made itself felt
before Spenning already. In literatuře we meet
with views associating Košice with Vienna, but
there are also authors refuting this relation. Now,
the north gâte might really be taken for an ar-
gument in favour of the former view. We find