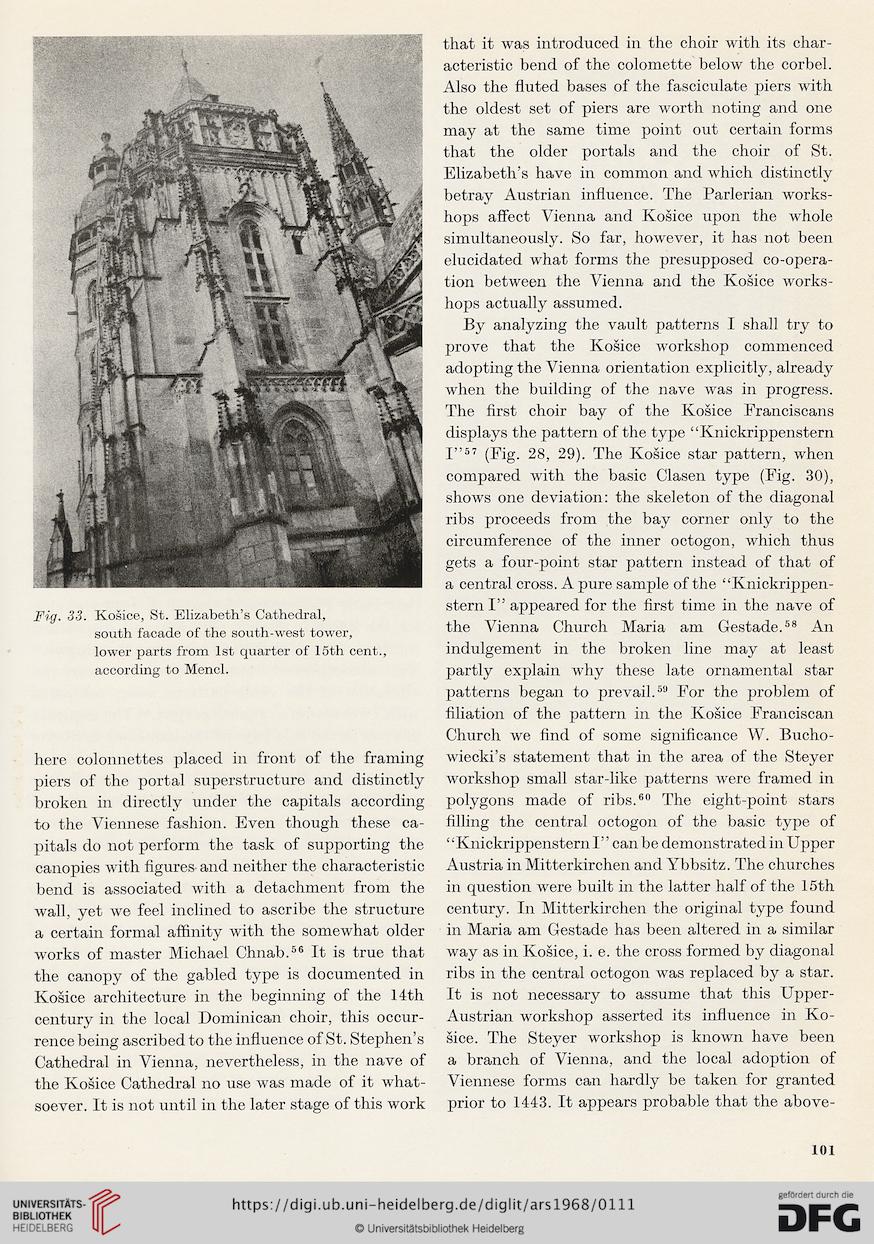 here colonnettes placed in front of the framing
piers of the portai superstructure and distinctly
broken in directly under the capitals according
to the Viennese fashion. Even though these ca-
pitals do not perform the task of supporting the
canopies with figures and neither the characteristic
bend is associated with a detachment from the
wall, yet we feel inclined to ascribe the structure
a certain formal affinity with the somewhat older
Works of master Michael Chnab.56 It is true that
the canopy of the gabled type is documented in
Košice architecture in the beginning of the l lth
Century in the local Dominican choir, this occur-
rence being ascribed to the influence of St. Stephen’s
Cathédral in Vienna, nevertheless, in the nave of
the Košice Cathédral no use was made of it what-
soever. It is not until in the later stage of this work

that it was introduced in the choir with its char-
acteristic bend of the colomette below the corbel.
Also the fluted bases of the fasciculate piers with
the oldest set of piers are worth noting and one
may at the same time point out certain forms
that the older portais and the choir of St.
Elizabeth’s hâve in common and which distinctly
betray Austrian influence. The Parlerian works-
hops affect Vienna and Košice upon the whole
simultaneously. So far, however, it has not been
elucidated what forms the presupposed co-opera-
tion between the Vienna and the Košice works-
hops actually assumed.
By analyzing the vault patterns I shall try to
prove that the Košice workshop commenced
adopting the Vienna orientation explicitly, already
when the building of the nave was in progress.
The first choir bay of the Košice Eranciscans
displays the pattern of the type “Knickrippenstern
I”57 (Fig. 28, 29). The Košice star pattern, when
compared with the basic Clasen type (Fig. 30),
shows one déviation: the skeleton of the diagonal
ribs proceeds from the bay corner only to the
circumference of the inner octogon, which thus
gets a four-point star pattern instead of that of
a central cross. A pure sample of the “Knickrippen-
stern I” appeared for the first time in the nave of
the Vienna Church Maria am Gestade.58 An
indulgement in the broken line may at least
partly explain why these late ornamental star
patterns began to prevail.59 For the problém of
filiation of the pattern in the Košice Franciscan
Church we find of some significance W. Bucho-
wiecki’s statement that in the area of the Steyer
workshop small star-like patterns were framed in
polygons made of ribs.60 The eight-point stars
filling the central octogon of the basic type of
“Knickrippenstern I’ ’ can be demonstrated in Upper
Austria in Mitterkirchen and Ybbsitz. The churches
in question were built in the latter half of the 15th
Century. In Mitterkirchen the original type found
in Maria am Gestade has been altered in a similar
way as in Košice, i. e. the cross formed by diagonal
ribs in the central octogon was replaced by a star.
It is not necessary to assume that this Upper-
Austrian workshop asserted its influence in Ko-
šice. The Steyer workshop is known hâve been
a branch of Vienna, and the local adoption of
Viennese forms can hardly be taken for granted
prior to 1443. It appears probable that the above-