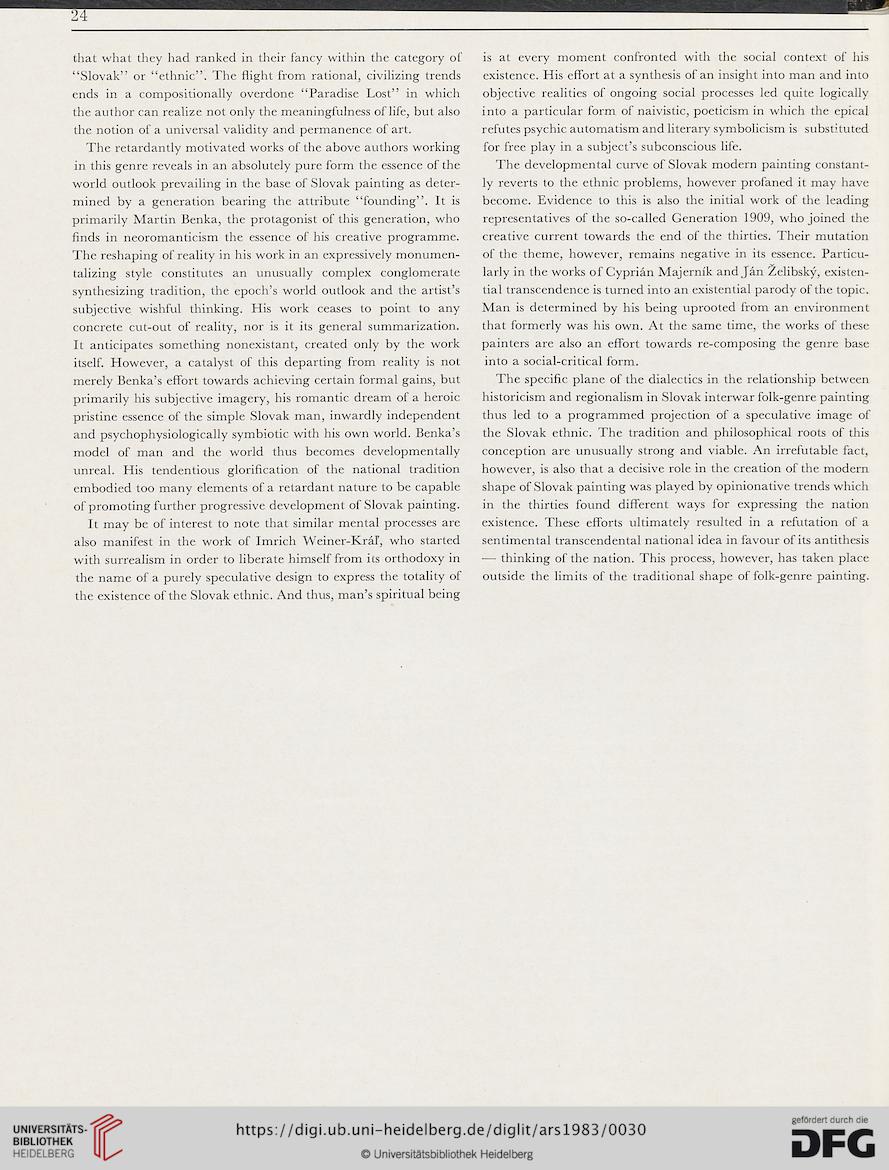 Information about OCR text
that wliat they had ranked in their fancy within the category of
“Slovák” or “ethnie”. The flight from rational, civilizing trends
ends in a compositionally overdone “Paradise Lost” in which
the author can realize not only the meaningfulness of life, but also
the notion of a universal validity and permanence of art.
The retardantly motivated works of the above authors working
in this genre reveals in an absolutely pure form the essence of the
world outlook prevailing in the base of Slovák painting as deter-
mined by a génération bearing the attribute “founding”. It is
primarily Martin Benka, the protagonist of this génération, who
finds in neoromanticism the essence of his créative programme.
The reshaping of reality in his work in an expressively monumen-
talizing style constitutes an unusually complex conglomerate
synthesizing tradition, the epoch’s world outlook and the artist’s
subjective wishful thinking. His work ceases to point to any
concrète cut-out of reality, nor is it its general summarization.
It anticipâtes something nonexistant, created only by the work
itself. However, a catalyst of this departing from reality is not
merely Benka’s effort towards achieving certain formai gains, but
primarily his subjective imagery, his romantic dream of a heroic
pristine essence of the simple Slovák man, inwardly independent
and psychophysiologically symbiotic with his own world. Benka’s
model of man and the world thus becomes developmentally
unreal. His tendentious glorification of the national tradition
embodied too many éléments of a retardant nature to be capable
of promoting further progressive development of Slovák painting.
It may be of interest to note that similar mental processes are
also manifest in the work of Imrich Weiner-Král, who started
with surrealism in order to liberate himself from its orthodoxy in
the name of a purely spéculative design to express the totality of
the existence of the Slovák ethnie. And thus, man’s spiritual being

is at every moment confronted with the social context of his
existence. His effort at a synthesis of an insight into man and into
objective realities of ongoing social processes led quite logically
into a particular form of naivistic, poeticism in which the epical
réfutés psychic automatism and literary symbolicism is substituted
for free play in a subject’s subconscious life.
The developmental curve of Slovák modern painting constant-
ly reverts to the ethnie problems, however profaned it may hâve
become. Evidence to this is also the initial work of the leading
représentatives of the so-called Generation 1909, who joined the
Creative current towards the end of the thirties. Their mutation
of the thème, however, remains negative in its essence. Particu-
larly in the works of Cyprián Majerník and Ján Zelibský, existen-
tial transcendence is turned into an existential parody of the topic.
Man is determined by his being uprooted from an environment
that formerly was his own. At the same time, the works of these
painters are also an effort towards re-composing the genre base
into a social-critical form.
The spécifie plane of the dialectics in the relationship between
historicism and regionalism in Slovák interwar folk-genre painting
thus led to a programmed projection of a spéculative image of
the Slovák ethnie. The tradition and philosophical roots of this
conception are unusually strong and viable. An irréfutable fact,
however, is also that a décisive role in the création of the modem
shape of Slovák painting was played by opinionative trends which
in the thirties found different ways for expressing the nation
existence. These efforts ultimately resulted in a réfutation of a
sentimental transcendental national idea in favour of its antithesis
— thinking of the nation. This process, however, has taken place
outside the limits of the traditional shape of folk-genre painting.