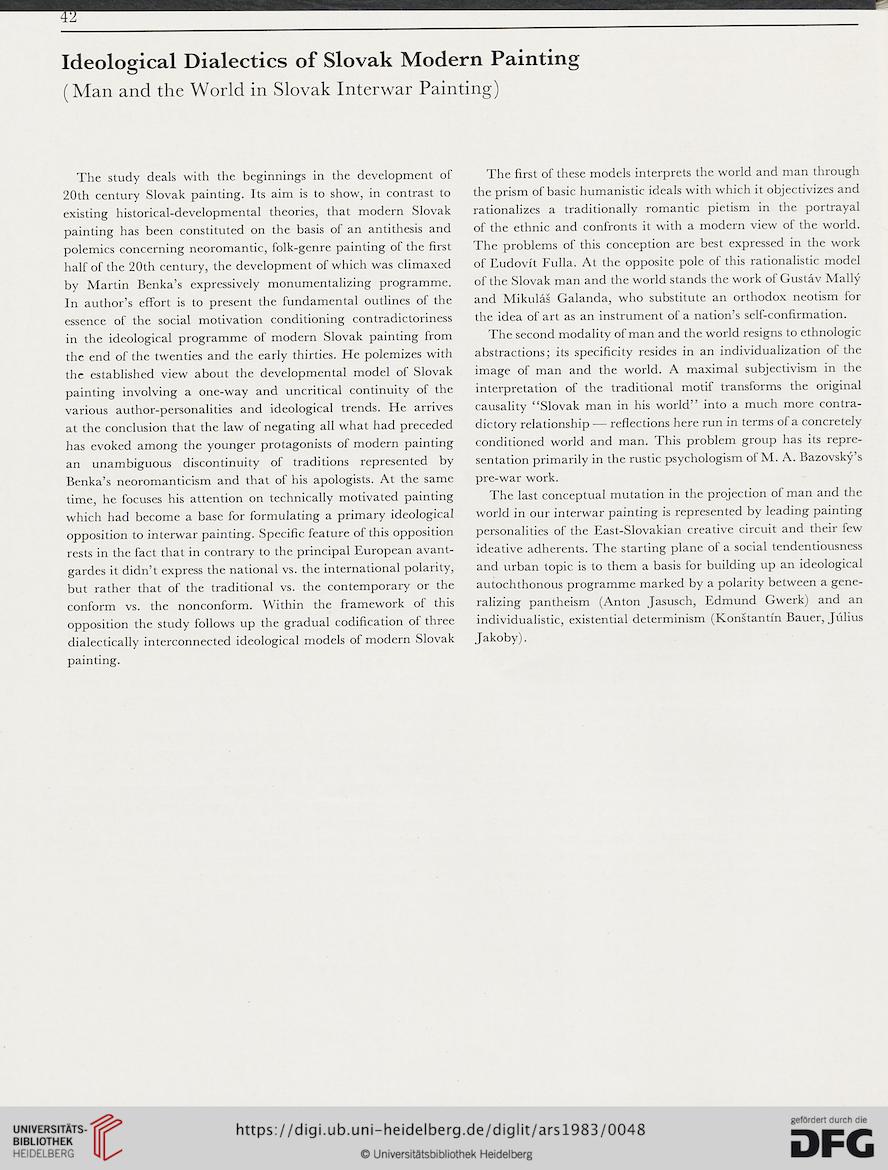 The study deals with the bcginnings in the development of
20th Century Slovák painting. Its aim is to show, in contrast to
existing historical-developmental théories, that modern Slovák
painting has been constituted on the basis of an antithesis and
polemics concerning neoromantic, folk-genre painting of the first
half of the 2Oth Century, the development of which was climaxcd
by Martin Bcnka’s expressively monumentalizing programme.
In author’s effort is to present the fundamental outlines of the
essence of the social motivation conditioning contradictoriness
in the ideological programme of modern Slovák painting from
the end of the twenties and the early thirties. Hc polemizes with
the established view about the developmental model of Slovák
painting involving a one-way and uncritical continuity of the
varions author-personalities and ideological trends. He arrives
at the conclusion that the law of negating ail what had preceded
has evoked among the younger protagonists of modern painting
an unambiguous discontinuity of traditions represented by
Benka’s neoromanticism and that of his apologists. At the same
time, he focuses his attention on technically motivated painting
which had become a base for formulating a primary ideological
opposition to interwar painting. Spécifie feature of this opposition
rests in the fact that in contrary to the principal European avant-
gardes it didn’t express the national vs. the international polarity,
but rather that of the traditional vs. the Contemporary or the
conform vs. the nonconform. Within the framework of this
opposition the study follows up the graduai codification of three
dialectically interconnected ideological models of modern Slovák
painting.

The first of these models interprets the world and man through
the prism of basic humanistic ideals with which it objectivizes and
rationalizes a traditionally romantic pietism in the portrayal
of the ethnie and confronts it with a modern view of the world.
The problems of this conception are best expressed in the work
of Eudovit Fulla. At the opposite pole of this rationalistic model
of the Slovák man and the world stands the work of Gustáv Mallý
and Mikuláš Galanda, who substitute an orthodox neotism for
the idea of art as an instrument of a nation’s self-confirmation.
The second modality of man and the world resigns to ethnologie
abstractions; its specificity résides in an individualization of the
image of man and the world. A maximal subjectivism in the
interprétation of the traditional motif transforms the original
causality “Slovák man in his world” into a much more contra-
dictory relationship — reflections here run in terms of a concretely
conditioned world and man. This problém group has its repré-
sentation primarily in the rustic psychologism of M. A. Bazovský’s
pre-war work.
The last conceptual mutation in the projection of man and the
world in our interwar painting is represented by leading painting
Personalities of the East-SIovakian créative circuit and their few
ideative adhérents. The starting plane of a social tendentiousness
and urban topič is to them a basis for building up an ideological
autochthonous programme marked by a polarity between a gene-
ralizing pantheism (Anton Jasusch, Edmund Gwerk) and an
individualistic, existential determinism (Konstantin Bauer, Július
Jakoby).