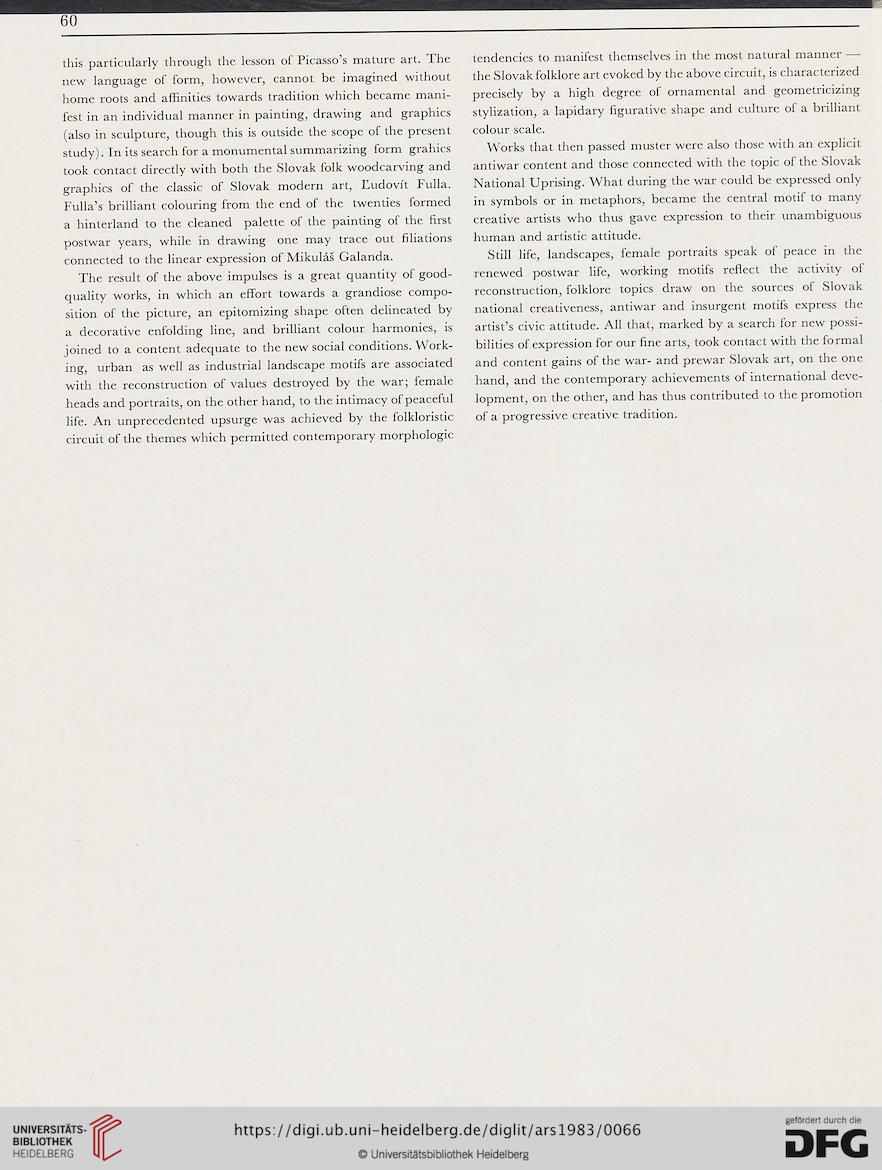 Information about OCR text
this particularly through the lesson of Picasso’s mature art. The
new language of form, however, cannot be imaginée! without
home roots and affinities towards tradition which became mani-
fest in an individual manner in painting, drawing and graphies
(also in sculpture, though this is outside the scopc of the present
study). In its search for a monumental summarizing form grahics
took contact directly with both the Slovák folk woodearving and
graphies of the classic of Slovák modem art, Eudovit Fulla.
Fulla’s brilliant colouring from the end of the twenties formed
a hinterland to the cleaned palette of the painting of the first
postwar years, while in drawing one may trace out filiations
connected to the linear expression of Mikuláš Galanda.
The resuit of the above impulses is a great quantity of good-
quality works, in which an effort towards a grandiose compo-
sition of the picture, an epitomizing shape often delineated by
a décorative enfolding line, and brilliant colour harmonies, is
joined to a content adéquate to the new social conditions. Work-
ing, urban as well as industrial landscape motifs are associated
with the reconstruction of values destroyed by the war; female
heads and portraits, on the other hand, to the intimacy of peaceful
life. An unprecedented upsurge was achieved by the folkloristic
circuit of the thèmes which permitted contemporary morphologie

tcndencies to manifest themselves in the most natural manner —
the Slovák folklore art evoked by the above circuit, is characterized
precisely by a high degree of ornamental and geometricizing
stylization, a lapidary figurative shape and culture of a brilliant
colour scale.
Works that then passed mus ter were also those with an explicit
antiwar content and those connected with the topič of the Slovák
National Uprising. What during the war could be expressed only
in symbols or in metaphors, became the central motif to many
créative artists who thus gave expression to their unambiguous
human and artistic attitude.
Still life, landscapes, female portraits speak of peace in the
renewed postwar life, working motifs reflect the activity of
reconstruction, folklore topics draw on the sources of Slovák
national creativeness, antiwar and insurgent motifs express the
artist’s civic attitude. Ail that, marked by a search for new possi-
bilities of expression for our fine arts, took contact with the formai
and content gains of the war- and prewar Slovák art, on the one
hand, and the contemporary achievements of international deve-
lopment, on the other, and has thus contributed to the promotion
of a progressive créative tradition.