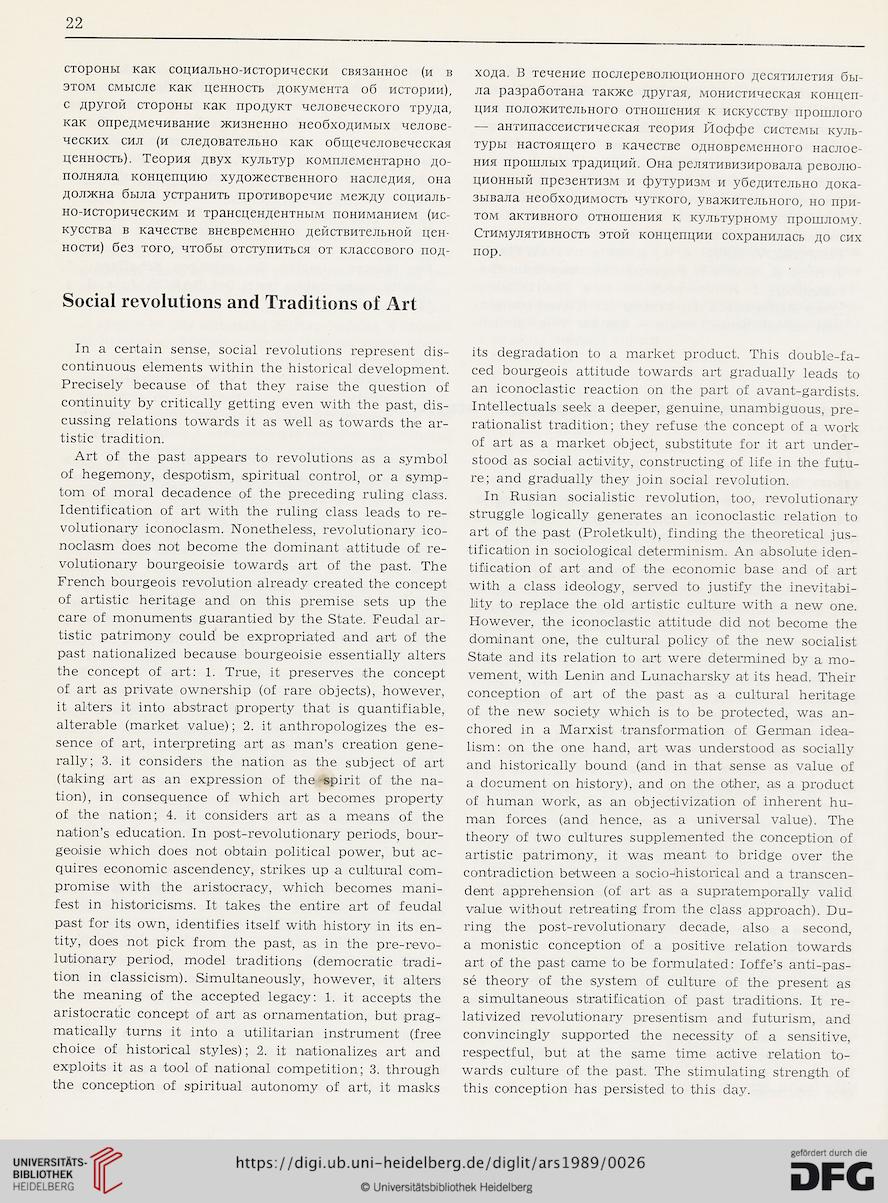 CTOpOHbI KäK COqMajILHO-MCTOpMHeCKM CB5I3aiIHOC (m B
3T0M CMMCJie KHK peHHOCTb flOKyMCHTa O6 MCTOpnn),
c /ipyroü CTopoHw KaK npo/(yKT HeJiOBenecKoro Tpy#a,
KaK onpeAMCHMBaHMe jkmshchho HeoSxoflMMBix hcjiobc-
necKMx cmji (m cjieflOBaTejibHO KaK oSmeHejiOBenecKaíi
HChhoctb). Teopnsi «nyx Kyjn/ryp KOMnjieMeHTapno «o-
nojnutjia KOHpenpnio xy^O/KecTiienHoro HacjieflM«, ona
ÆOJDKHa ôbijia ycTpaHMTb npoTOBopenne MOK/iy copnajiB-
HO-MCTOpnqeCKMM M TpaHCpeHfleHTHblM nOHMMaHMCM (mc-
KyccTBa b KanecTBe BHCBpeMeHHO ßencTBHTeJibHOM pen-
hoctm) 6e3 Toro, htoSbi OTCTymiTbca ot KJiaccoBoro iio/i-
Social révolutions and Traditions of Art
In a certain sense, social révolutions represent dis-
continuons éléments within the historical development.
Precisely because of that they raise the question of
continuity by critically getting even with the past, dis-
cussing relations towards it as well as towards the ar-
tistic tradition.
Art of the past appears to révolutions as a symbol
of hegemony, despotism, spiritual control, or a symp-
tom of moral decadence of the preceding ruling class.
Identification of art with the ruling class leads to re-
volutionär iconoclasm. Nonetheless, revolutionary ico-
noclasm does not become the dominant attitude of re-
volutionary bourgeoisie towards art of the past. The
French bourgeois révolution already created the concept
of artistic héritage and on this premise sets up the
care of monuments guarantied by the State. Feudal ar-
tistic patrimony could be expropriated and art of the
past nationalized because bourgeoisie essentially alters
the concept of art: 1. True, it préserves the concept
of art as private ownership (of rare objects), however,
it alters it into abstract property that is quantifiable,
altérable (market value) ; 2. it anthropologizes the es-
sence of art, interpreting art as man’s création gene-
rally; 3. it considers the nation as the subject of art
(taking art as an expression of the spirit of the na-
tion), in conséquence of which art becomes property
of the nation; 4. it considers art as a means of the
nation’s éducation. In post-revolutionary periods, bour-
geoisie which does not obtain political power, but ac-
quires économie ascendency, strikes up a cultural com-
promise with the aristocracy, which becomes mani-
fest in historicisms. It takes the entire art of feudal
past for its own, identifies itself with history in its en-
tity, does not pick from the past, as in the pre-revo-
lutionary period, model traditions (démocratie tradi-
tion in classicism). Simultaneously, however, it alters
the meaning of the accepted legacy: 1. it accepts the
aristocratie concept of art as ornamentation, but prag-
matioally turns it into a utilitarian instrument (free
choice of historical styles) ; 2. it nationalizes art and
exploits it as a tool of national compétition; 3. through
the conception of spiritual autonomy of art, it masks

its dégradation to a market produet. This double-fa-
ced bourgeois attitude towards art gradually leads to
an iconoclastic reaction on the part of avant-gardists.
Intellectuals seek a deeper, genuine, unambiguous, pre-
rationalist tradition; they refuse the concept of a work
of art as a market object, substitute for it art under-
stood as social activity, construeting of life in the futu-
re; and gradually they join social révolution.
In Rusian socialistic révolution, too, revolutionary
struggle logically generates an iconoclastic relation to
art of the past (Proletkult), finding the theoretical jus-
tification in sociological determinism. An absolute iden-
tification of art and of the économie base and of art
with a class ideology, served to justify the inevitabi-
lity to replace the old artistic culture with a new one.
However, the iconoclastic attitude did not become the
dominant one, the cultural policy of the new socialist
State and its relation to art were determined by a mo-
vement, with Lenin and Lunacharsky at its head. Their
conception of art of the past as a cultural héritage
of the new society which is to be protected, was an-
chored in a Marxist transformation of German idea-
lism: on the one hand, art was understood as socially
and historically bound (and in that sense as value of
a document on history), and on the other, as a produet
of human work, as an objectivization of inherent hu-
man forces (and hence, as a universal value). The
theory of two cultures supplemented the conception of
artistic patrimony, it was meant to bridge over the
contradiction between a socio-historical and a transcen-
dent appréhension (of art as a supratemporally valid
value without retreating from the class approach). Dü-
ring the post-revolutionary decade, also a second,
a monistic conception of a positive relation towards
art of the past came to be formulated: loffe’s anti-pas-
sé theory of the systém of culture of the present as
a simultaneous stratification of past traditions. It re-
lativized revolutionary presentism and futurism, and
convincingly supported the necessity of a sensitive,
respectful, but at the same time active relation to-
wards culture of the past. The stimulating strength of
this conception has persisted to this day.