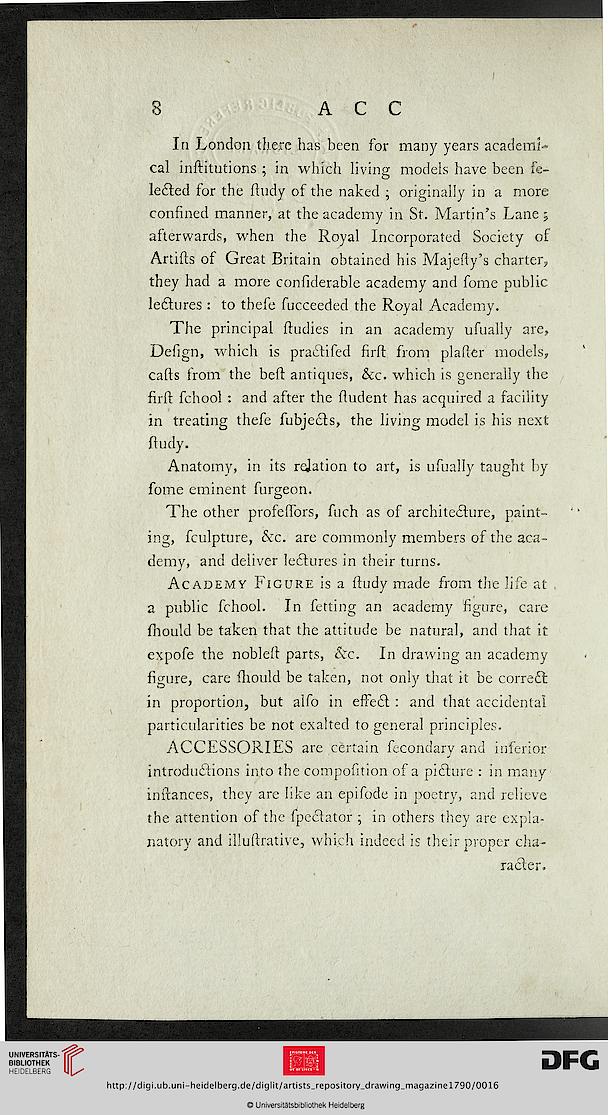 In London there has been for many years academi-
cal inftitutions ; in which living models have been re-
jected for the ftudy of the naked ; originally in a more
confined manner, at the academy in St. Martin's Lane 5
afterwards, when the Royal Incorporated Society of
Artifts of Great Britain obtained his Majefty's charter,
they had a more confiderable academy and fome public
lectures : to thefe fucceeded the Royal Academy.

The principal ftudies in an academy ufually are,
Defign, which is practifed firft from plafter models,
calls from the beft antiques, &c. which is generally the
firft fchool : and after the ftudent has acquired a facility
in treating thefe fubjects, the living model is his next
ftudy.

Anatomy, in its relation to art, is ufually taught by
fome eminent furgeon.

The other profeflors, fuch as of architecture, paint-
ing, fculpture, &c. are commonly members of the aca-
demy, and deliver lectures in their turns.

Academy Figure is a ftudy made from the life at
a public fchool. In fetting an academy figure, care
fhould be taken that the attitude be natural, and that it
expofe the nobleft parts, &c. In drawing an academy
figure, care fhould be taken, not only that it be correct
in proportion, but alfo in effect: and that accidental
particularities be not exalted to general principles.

ACCESSORIES are certain fecondary and inferior
introductions into the compofition of a picture : in many
infrances, they are like an epifode in poetry, and relieve
the attention of the fpectator ; in others they are expla-
natory and illuftrative, which indeed is their proper cha-
racter,