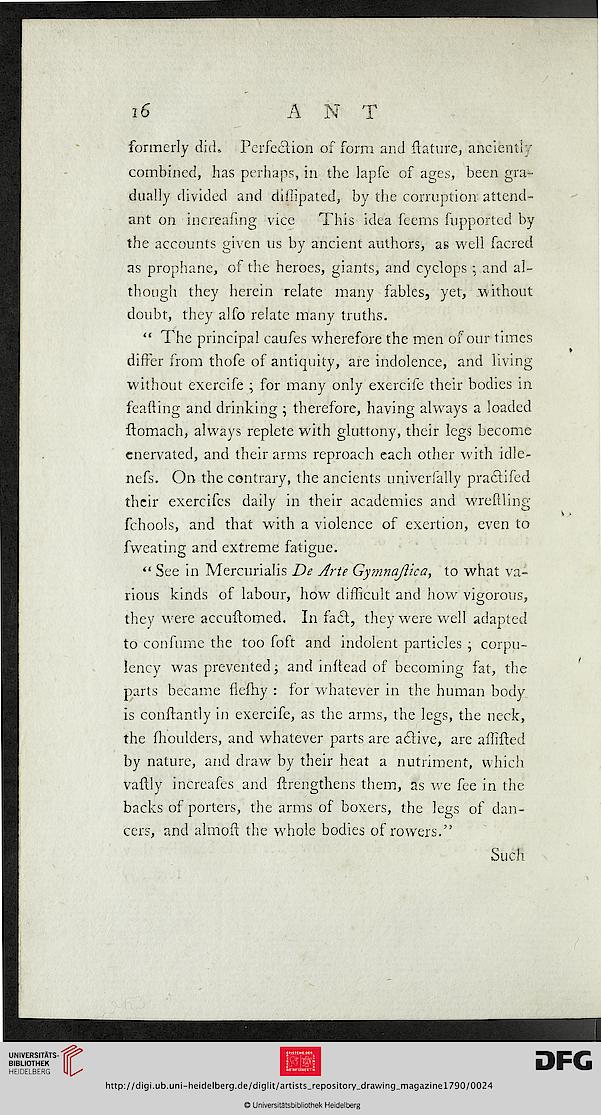 formerly did. Perfection of form and Stature, anciently
combined, has perhaps, in the lapfe of ages, been gra-
dually divided and diffipated, by the corruption attend-
ant on increafing vice This idea fcems fupported by
the accounts given us by ancient authors, as well facred
as prophane, of the heroes, giants, and cyclops :, and al-
though they herein relate many fables, yet, without
doubt, they alfo relate many truths.

" The principal caufes wherefore the men of our times
differ from thofe of antiquity, are indolence, and living
without exercife ; for many only exercife their bodies in
feafting and drinking ; therefore, having always a loaded
ftomach, always replete with gluttony, their legs become
enervated, and their arms reproach each other with idle-
nefs. On the contrary, the ancients univerfally practifed
their exercifes daily in their academies and wreftling
fchools, and that with a violence of exertion, even to
fweating and extreme fatigue.

" See in Mercurialis De Arte Gymnajlica, to what va-
rious kinds of labour, how difficult and how vigorous,
they were accuftomed. In fact, they were well adapted
to confume the too foft and indolent particles ; corpu-
lency was prevented; and inftead of becoming fat, the
parts became flefhy : for whatever in the human body
is constantly in exercife, as the arms, the legs, the neck,
the moulders, and whatever parts are active, are affifted
by nature, and draw by their heat a nutriment, which
vaftly increafes and Strengthens them, as we fee in the
backs of porters, the arms of boxers, the legs of dan-
cers, and almoft the whole bodies of rowers."