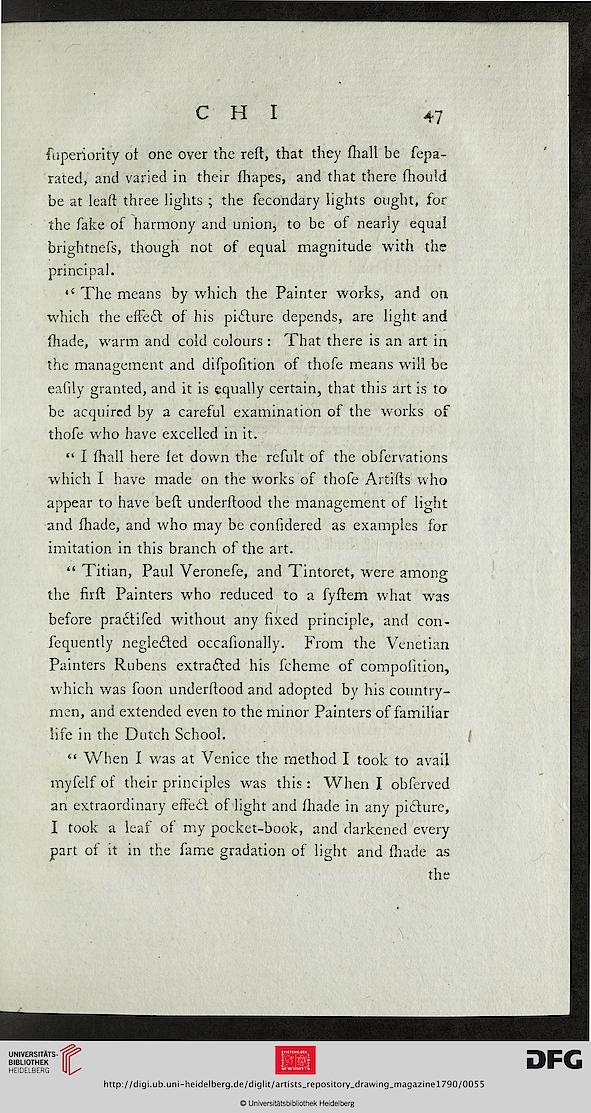 fuperiority ot one over the reft, that they fhall be fepa-
rated, and varied in their fhapes, and that there mould
be at leaft three lights ; the fecondary lights ought, for
the fake of harmony and union, to be of nearly equal
brightnefs, though not of equal magnitude with the
principal.

•* The means by which the Painter works, and on
which the effect of his picture depends, are light and
made, warm and cold colours : That there is an art in
the management and difpofition of thofe means will be
eafily granted, and it is equally certain, that this art is to
be acquired by a careful examination of the works of
thofe who have excelled in it.

'* I fhall here let down the refult of the obfervations
which I have made on the works of thofe Artifts who
appear to have beft underftood the management of light
and fhade, and who may be considered as examples for
imitation in this branch of the art.

'* Titian, Paul Veronefe, and Tintoret, were among
the firft Painters who reduced to a fyftem what was
before pra6tifed without any fixed principle, and con-
fequently neglected occafionally. From the Venetian
Painters Rubens extracted his fcheme of compofition,
which was foon underftood and adopted by his country-
men, and extended even to the minor Painters of familiar
life in the Dutch School.

" When I was at Venice the method I took to avail
myfelf of their principles was this: When I obferved
an extraordinary effect of light and fhade in any picture,
I took a leaf of my pocket-book, and darkened every
part of it in the fame gradation of light and fhade as