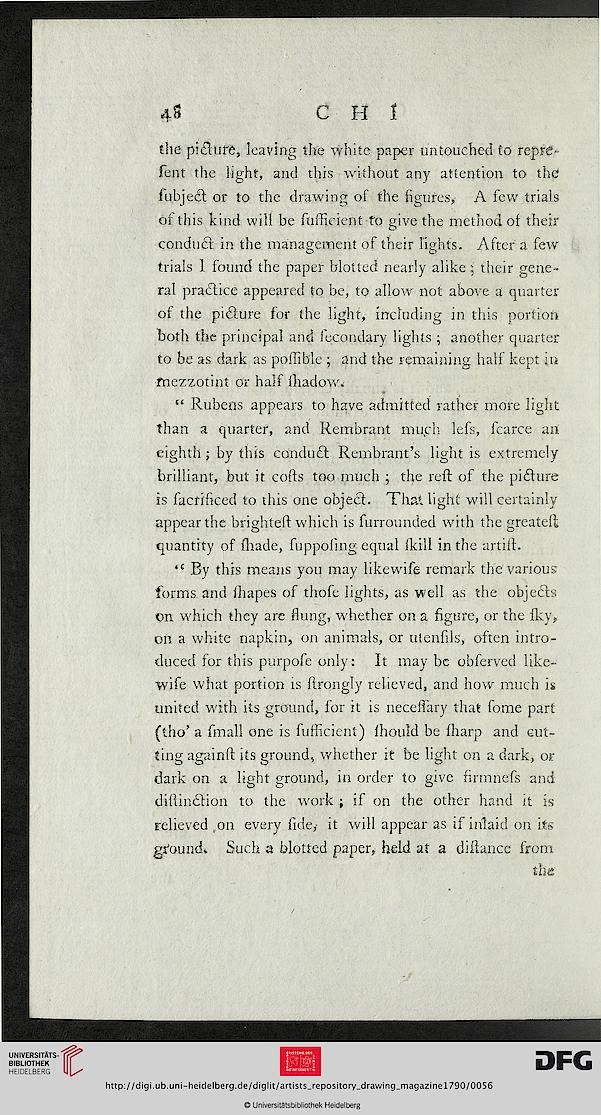 the picture, leaving the white paper untouched to reprev
fent the light, and this without any attention to the
fubject or to the drawing of the figures, A few trials
of this kind will be fufficient to give the method of their
conduct in the management of their lights. After a few
trials 1 found the paper blotted nearly alike \ their gene-
ral practice appeared to be, to allow not above a quarter
of the picture for the light, including in this portion
both the principal and lecondary lights ; another quarter
to be as dark as poffible ; and the remaining half kept in
mezzotint or half fhadow.

" Rubens appears to have admitted rather more light
than a quarter, and Rembrant much lefs, fcarce an
eighth ; by this conduct Rembrant's light is extremely
brilliant, but it cofts too much ; the reft of the picture
is facfifked to this one object. Thai light will certainly
appear the brighteft which is furrounded with the greatefi
quantity of fhade, fuppofing equal {kill in the artift.

" By this means you may likewife remark the various
forms and lhapes of thofe lights, as well as the objects
on which they are flung, whether on a figure, or the Iky,
on a white napkin, on animals, or utenfils, often intro-
duced for this purpofe only: It may be obferved like-
wife what portion is ftrongly relieved, and how much is
united with its ground, for it is neceffary that fome part
(tho' a fmall one is fufficient) fhould be fharp and cut-
ting againft its ground, whether it be light on a dark, or
dark on a light ground, in order to give firmnefs and
diflinction to the work ; if on the other hand it is
relieved on every fide, it will appear as if inlaid on its
ground* Such a blotted paper,, held at a difiance from