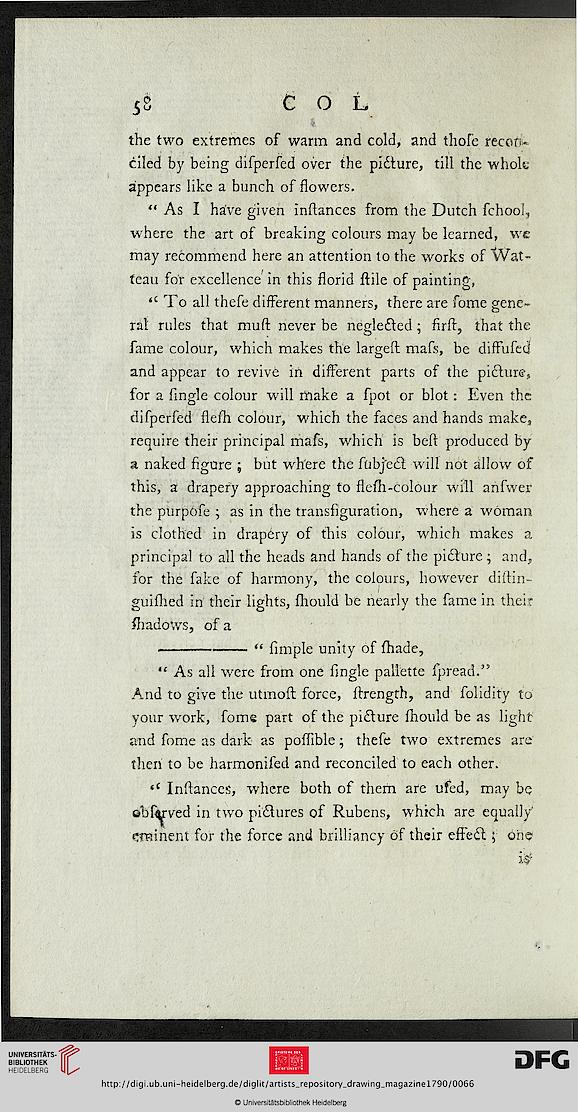 the two extremes of warm and cold, and thofe recon-
ciled by being difperfed over the picture, till the whole
appears like a bunch of flowers.

" As I have given inftances from the Dutch fchool,
where the art of breaking colours may be learned, we
may recommend here an attention to the works of Wat-
teau for excellence' in this florid ftile of painting,

" To all thefe different manners, there are fome gene-
ral rules that muff never be negle&ed; firft, that the
fame colour, which makes the largeft mafs, be diffufed
and appear to revive in different parts of the picture,
for a fingle colour will make a fpot or blot: Even the
difperfed flefh colour, which the faces and hands make,,
require their principal mafs, which is beft produced by
a naked figure ; but where the fnbject will not allow of
this, a drapery approaching to flefh-colour will anfwer
the purpofe ; as in the transfiguration, where a woman
is clothed in drapery of this colour, which makes a
principal to all the heads and hands of the picture ; and,
for the fake of harmony, the colours, however diftin-
guifhed in their lights, mould be nearly the fame in their
fhadows, of a

" As all were from one fingle pallette fpread."
And to give the utmoft force, ftrength, and folidity to
your work, fome part of the picture mould be as light
and fome as dark as poffible; thefe two extremes are'
then to be harmonifed and reconciled to each other.

«' Inftances, where both of them are ufed, may be
©bfi^ved in two pictures of Rubens, which are equally
eminent for the force and brilliancy of their effect; one