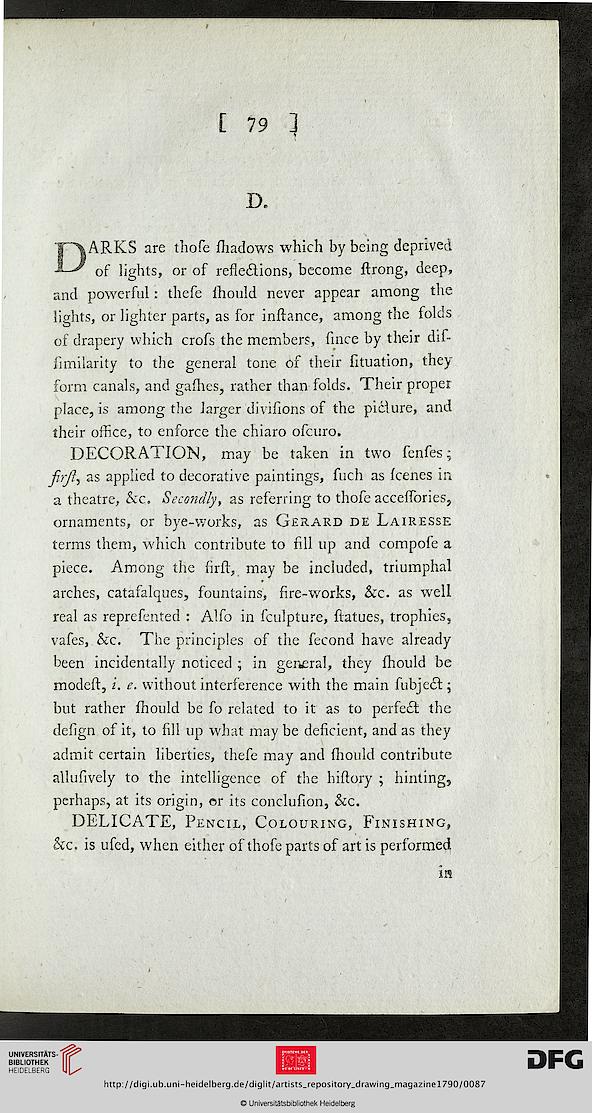 THVARKS are thofe fhadows which by being deprived
of lights, or of reflections, become ftrong, deep,
and powerful: thefe mould never appear among the
lights, or lighter parts, as for inftance, among the folds
of drapery which crofs the members, fince by their dif-
fimilarity to the general tone of their fituation, they
form canals, and games, rather than folds. Their proper
place, is among the larger divifions of the pidure, and
their office, to enforce the chiaro ofcuro.

DECORATION, may be taken in two fenfes;
firjl, as applied to decorative paintings, fuch as icenes in
a theatre, &c. Secondly, as referring to thofe acceflbries,
ornaments, or bye-works, as Gerard de Lairesse
terms them, which contribute to fill up and compofe a
piece. Among the firft, may be included, triumphal
arches, catafalques, fountains, fire-works, Sec. as well
real as reprefented : Alfo in fculpture, ftatues, trophies,
vafes, &c. The principles of the fecond have already
been incidentally noticed ; in general, they fhould be
modeft, i. e. without interference with the main fubject;
but rather fhould be fo related to it as to perfect the
defign of it, to fill up what may be deficient, and as they
admit certain liberties, thefe may and mould contribute
allufively to the intelligence of the hiftory ; hinting,
perhaps, at its origin, or its conclufion, &c.

DELICATE, Pencil, Colouring, Finishing,
Sec. is ufed, when either of thofe parts of art is performed