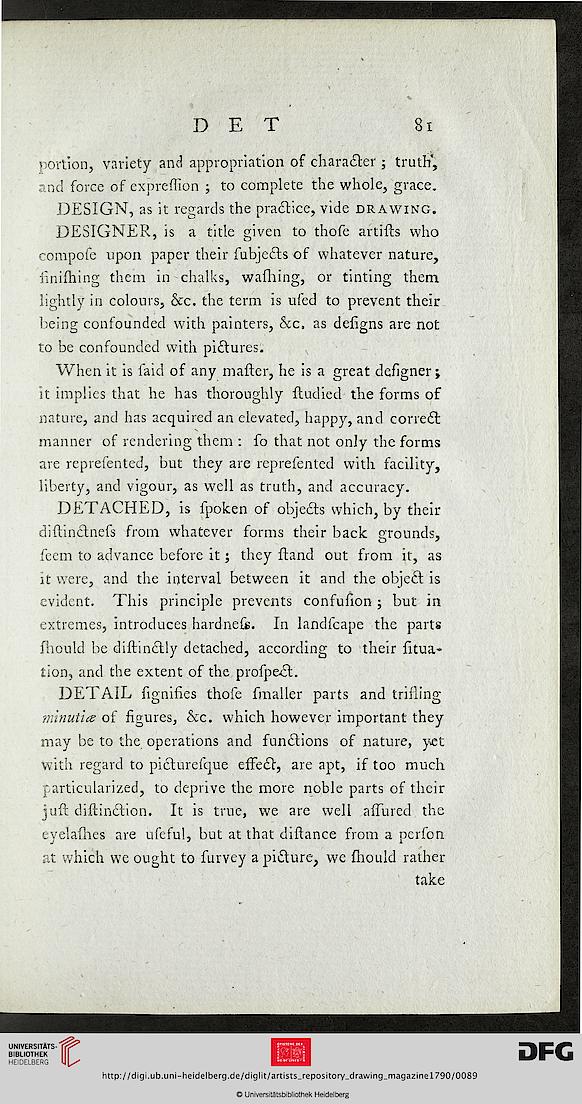 portion, variety and appropriation of character; truth*,
and force of expreffion ; to complete the whole, grace.

DESIGN, as it regards the practice, vide drawing.

DESIGNER, is a title given to thofe artifts who
compofe upon paper their fubjects of whatever nature,
rinifhing them in-chalks, wafhing, or tinting them
lightly in colours, &c. the term is ufed to prevent their
being confounded with painters, &c. as defigns are not
to be confounded with pictures.

When it is faid of any mafter, he is a great defigner;
it implies that he has thoroughly ftudied the forms of
nature, and has acquired an elevated, happy, and correct
manner of rendering them : fo that not only the forms
are reprefented, but they are reprefented with facility,
liberty, and vigour, as well as truth, and accuracy.

DETACHED, is fpolcen of objects which, by their
diftinctnefs from whatever forms their back grounds,
feem to advance before it; they ftand out from it, as
it were, and the interval between it and the object is
evident. This principle prevents confufion ; but in
extremes, introduces hardneii. In landfcape the parts
fhould be diftinctly detached, according to their litua-
tion, and the extent of the profpecl.

DETAIL fignifies thofe fmaller parts and trifling
?nlnutice of figures, &c. which however important they
may be to the operations and functions of nature, yet
with regard to picturefque effect, are apt, if too much
particularized, to deprive the more noble parts of their
juft diftinction. It is true, we are well allured the
eyelafb.es are ufeful, but at that diftance from a perfon
at which we ought to furvey a picture, we mould rather