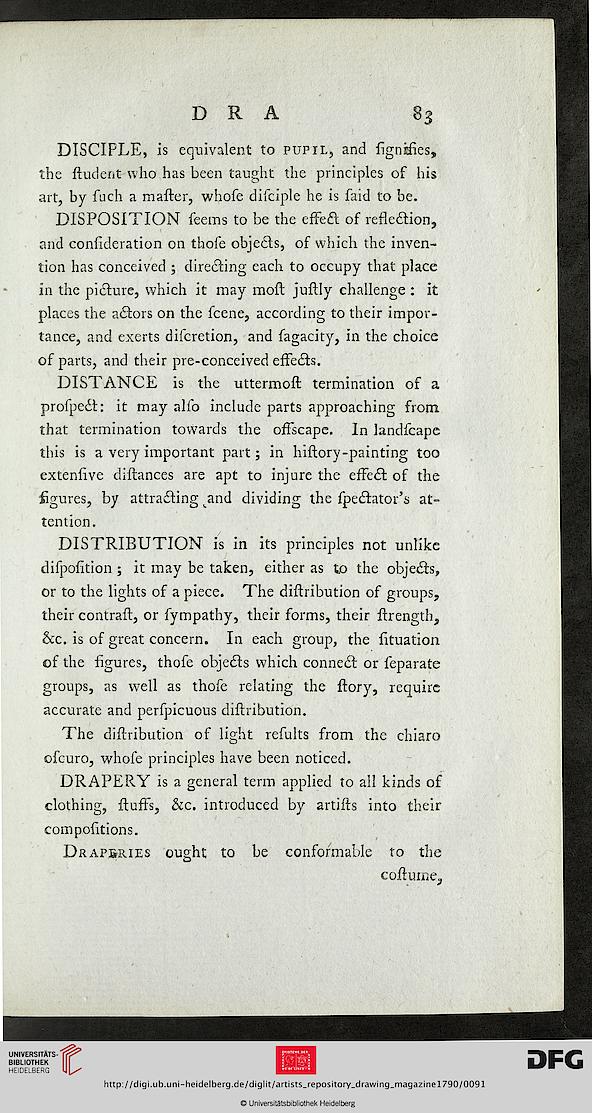 DISCIPLE, is equivalent to pupil, and Signifies,
the Student who has been taught the principles of his
art, by fuch a mafter, whofe difciple he is faid to be.

DISPOSITION feems to be the effea of reflexion,
and consideration on thofe objects, of which the inven-
tion has conceived ; directing each to occupy that place
in the picture, which it may moft juftly challenge : it
places the actors on the fcene, according to their impor-
tance, and exerts difcretion, and fagacity, in the choice
of parts, and their pre-conceived effects.

DISTANCE is the uttermoft termination of a
profpedt: it may alfo include parts approaching from,
that termination towards the offscape. In landfcape
this is a very important part; in hiftory-painting too
extenlive distances are apt to injure the effect of the
figures, by attracting tand dividing the Spectator's at-
tention.

DISTRIBUTION is in its principles not unlike
difpofition ; it may be taken, either as to the objects,
or to the lights of a piece. The distribution of groups,
their contrail, or fympathy, their forms, their Strength,
&c. is of great concern. In each group, the Situation
of the figures, thofe objects which connect or feparate
groups, as well as thofe relating the Story, require
accurate and perfpicuous diftribution.

DRAPERY is a general term applied to all kinds of
clothing, fluffs, &c. introduced by artifts into their
compositions.

Drapbries ought to be conformable to the