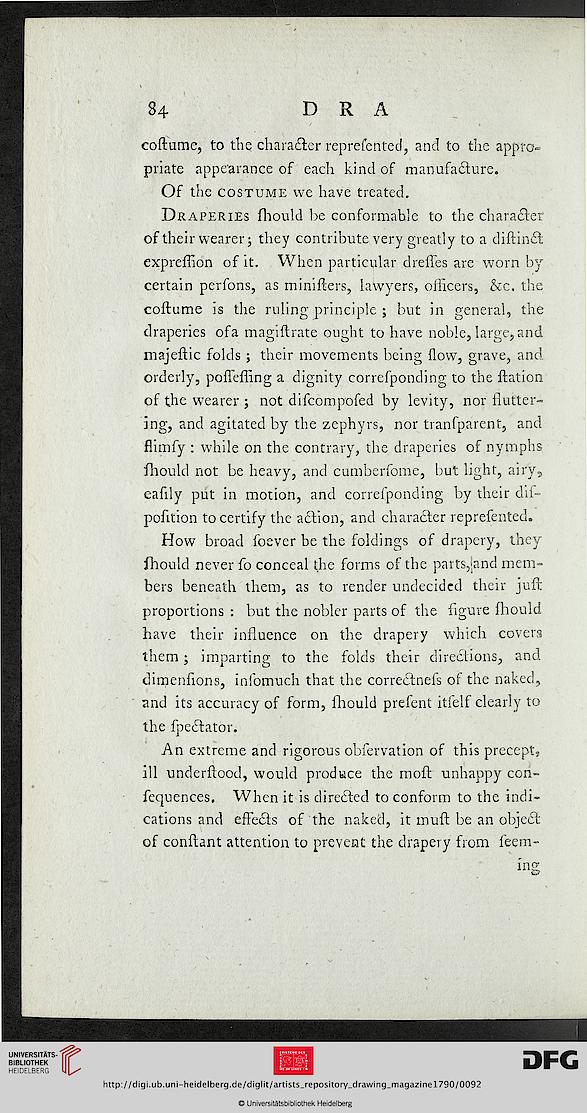 coftume, to the character reprefented, and to the appro-
priate appearance of each kind of manufacture.

Of the costume we have treated.

Draperies fhould be conformable to the character
of their wearer; they contribute very greatly to a diftinct
expreffion of it. When particular dreffes are worn by
certain perfons, as minifters, lawyers, officers, &c. the
coftume is the ruling principle ; but in general, the
draperies ofa magiftrate ought to have noble, large, and
majeftic folds; their movements being flow, grave, and
orderly, poiTeffing a dignity correfponding to the ftation
of the wearer ; not difcompofed by levity, nor flutter-
ing, and agitated by the zephyrs, nor tranfparent, and
flimfy : while on the contrary, the draperies of nymphs
fhould not be heavy, and cumberfome, but light, airy9
eafily put in motion, and correfponding by their dif-
pofition to certify the action, and character reprefented.

How broad foever be the foldings of drapery, they
fhould never fo conceal the forms of the parts,iand mem-
bers beneath them, as to render undecided their juft
proportions : but the nobler parts of the figure fhould
have their influence on the drapery which covers
them; imparting to the folds their directions, and
dimenfions, infomuch that the correctnefs of the naked,
and its accuracy of form, fhould prefent itfelf clearly to
the fpectator.

An extreme and rigorous obfervation of this precept,
ill underftood, would produce the moft unhappy con-
fequences. When it is directed to conform to the indi-
cations and effects of the naked, it muft be an object
of conftant attention to prevent the drapery from leem-