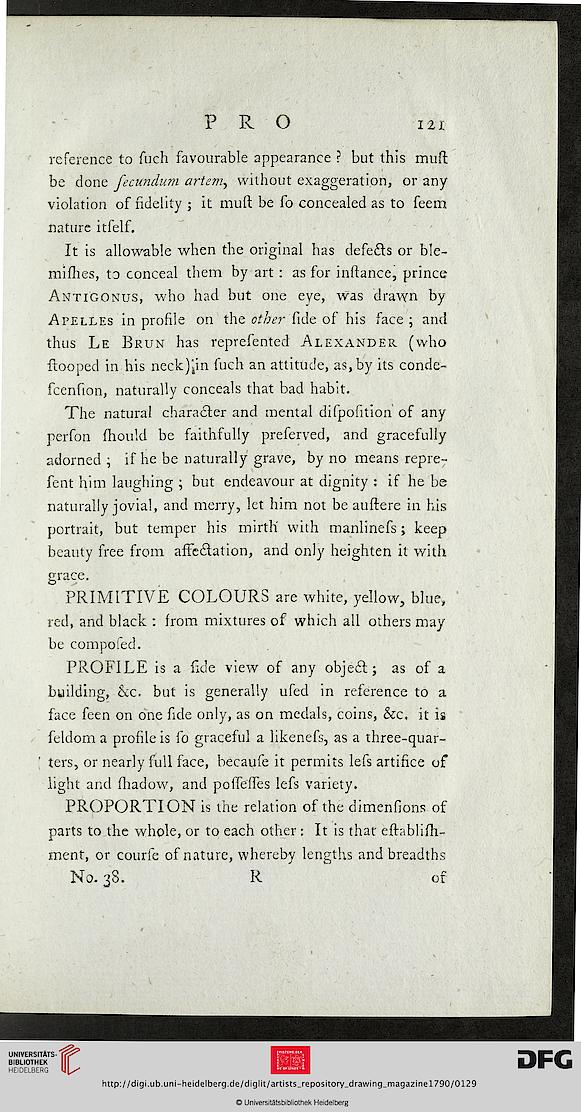 reference to fuch favourable appearance ? but this muli
be done fecundum artem, without exaggeration, or any
violation of fidelity ; it muft be fo concealed as to feem
nature itfelf.

It is allowable when the original has defects or ble-
mifhes, to conceal them by art : as for inftance, prince
Antigonus, who had but one eye, was drawn by
Apelles in profile on the other fide of his face ; and
thus Le Brun has reprefented Alexander (who
{looped in his neckj^in fuch an attitude, as, by its conde-
fcenfion, naturally conceals that bad habit.

The natural character and mental difpofition of any
perfon fhould be faithfully preferved, and gracefully
adorned ; if he be naturally grave, by no means repre-
fent him laughing ; but endeavour at dignity : if he be
naturally jovial, and merry, let him not be auftere in his
portrait, but temper his mirth' with manlinefs; keep
beauty free from affectation, and only heighten it with
grace.

PRIMITIVE COLOURS are white, yellow, blue,
red, and black : from mixtures of which all others may
be compoled.

PROFILE is a fide view of any object; as of a
building, he. but is generally ufed in reference to a
face feen on one fide only, as on medals, coins, &c. it is
feldom a profile is fo graceful a likenefs, as a three-quar-
ters, or nearly full face, becaufe it permits lefs artifice of
light and fhadow, and poffeffes lefs variety.

PROPORTION is the relation of the dimenfions of
parts to the whole, or to each other : It is that eftablifh-
ment, or courfe of nature, whereby lengths and breadths