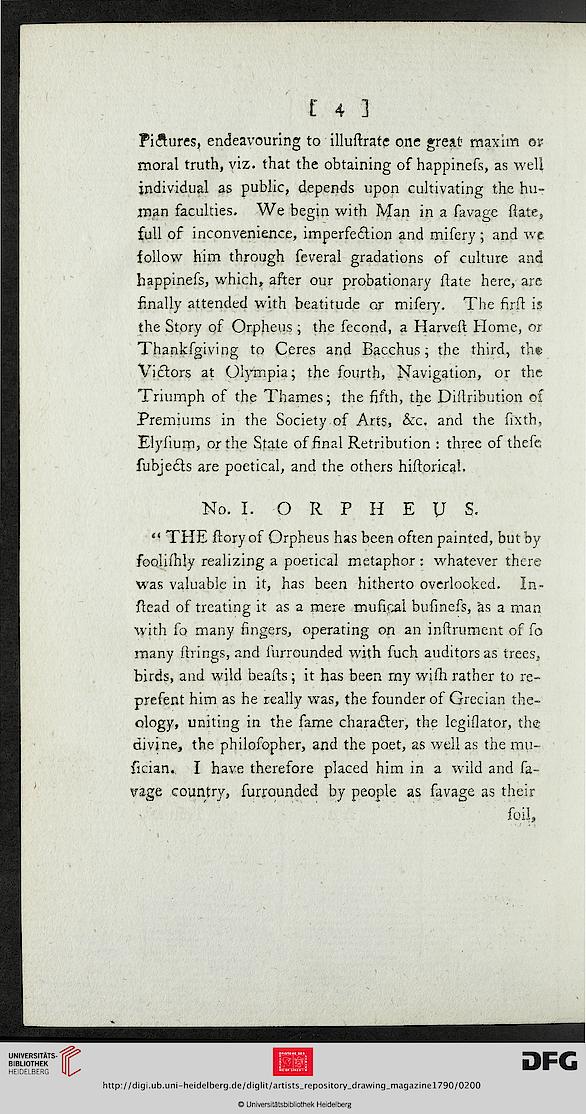 Information about OCR text
I 4 1

Pi&ures, endeavouring to illufirate one great maxim o?
moral truth, viz. that the obtaining of happinefs, as well
individual as public, depends upon cultivating the hu-
man faculties. We begin with Man in a favage ft ate,
full of inconvenience, imperfection and mifery; and we.
follow him through feveral gradations of culture and
happinefs, which, after our probationary ftate here, are
finally attended with beatitude or mifery. The firft is
the Story of Orpheus ; the fecond, a Harveft Home, or
Thankfgiving to Ceres and Bacchus; the third, the
Victors at Olympia; the fourth, Navigation, or the
Triumph of the Thames; the fifth, the Diftribution of
Premiums in the Society of Arts, &c, and the fixth,
Elyfium, or the State of final Retribution : three of thefe
fubjecfs are poetical, and the others hiftorical.

" THE fiery of Orpheus has been often painted, but by
foolifhly realizing a poerical metaphor : whatever there
was valuable in it, has been hitherto overlooked. In-
stead of treating it as a mere mufical bufinefs, as a man
with fo many fingers, operating on an inftrument of fo
many firings, and furrounded with fuch auditors as trees,
birds, and wild hearts; it has been my wifh rather to re-
prefent him as he really was, the founder of Grecian the-
ology, uniting in the fame character, the legiflator, the
divine, the phiiofopher, and the poet, as well as the mu-
fician. I have therefore placed him in a wild and fa-
vage country, furrounded by people as favage as their