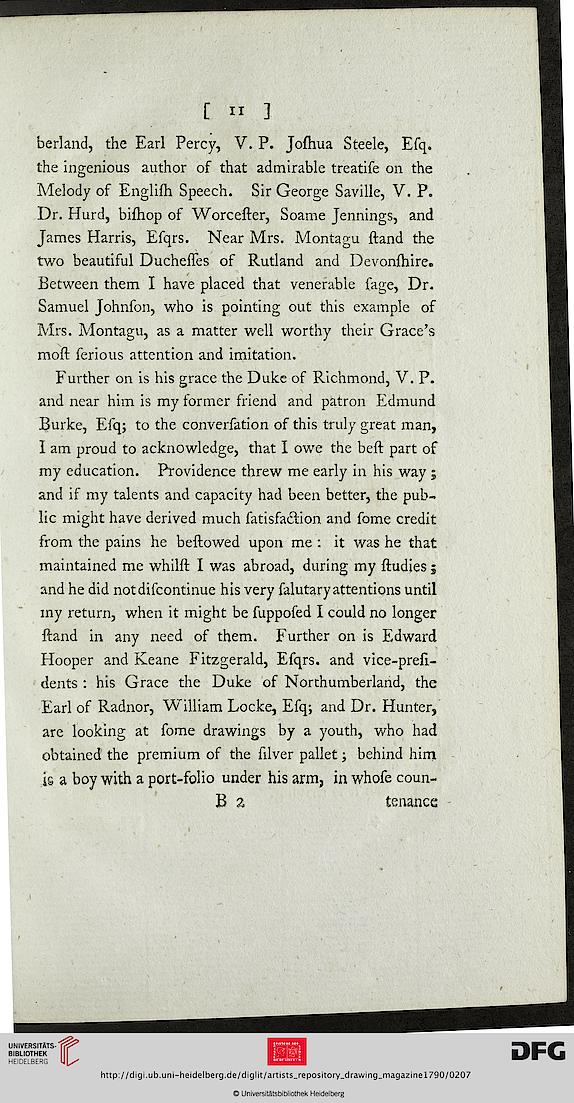 berland, the Earl Percy, V. P. Jofhua Steele, Efq.
the ingenious author of that admirable treatife on the
Melody of Englim Speech. Sir George Saville, V. P.
Dr. Hurd, bifhop of Worcefter, Soame Jennings, and
James Harris, Efqrs. Near Mrs. Montagu ftand the
two beautiful Ducheffes of Rutland and Devonlhire.
Between them I have placed that venerable fage, Dr.
Samuel Johnfon, who is pointing out this example of
Mrs. Montagu, as a matter well worthy their Grace's
mod ferious attention and imitation.

Further on is his grace the Duke of Richmond, V. P.
and near him is my former friend and patron Edmund
Burke, Efq; to the converfation of this truly great man,
I am proud to acknowledge, that I owe the beft part of
my education. Providence threw me early in his way ;
and if my talents and capacity had been better, the pub-
lic might have derived much fatisfaclion and fome credit
from the pains he beftowed upon me : it was he that
maintained me whilft I was abroad, during my ftudies ;
and he did notdifcontinue his very falutary attentions until
my return, when it might be fuppofed I could no longer
ftand in any need of them. Further on is Edward
Hooper and Keane Fitzgerald, Efqrs. and vice-prefi.-
dents : his Grace the Duke of Norchumberland, the
Earl of Radnor, William Locke, Efq; and Dr. Hunter,
are looking at fome drawings by a youth, who had
obtained the premium of the ulver pallet; behind him
19 a boy with a port-folio under his arm, in whofe coun-