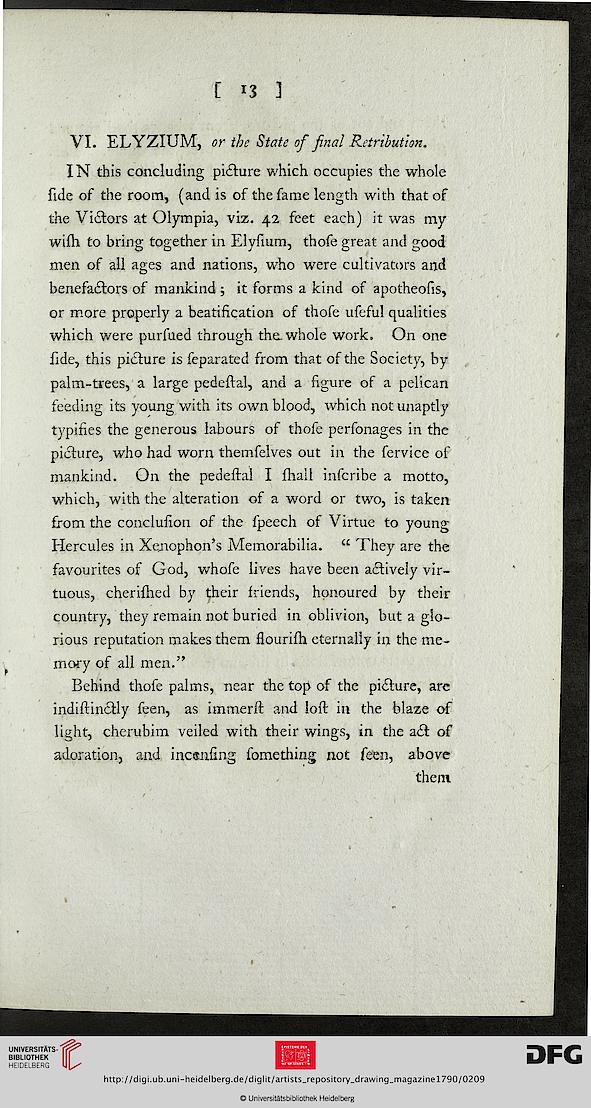 Information about OCR text
[ i3 1

VI. ELYZIUM, or the State of final Retribution.

IN this concluding picture which occupies the whole
fide of the room, (and is of the fame length with that of
the Victors at Olympia, viz. 42 feet each) it was my
wifh to bring together in Elyfium, thofe great and good
men of all ages and nations, who were cultivators and
benefactors of mankind ; it forms a kind of apotheofis,
or more properly a beatification of thofe ufeful qualities
which were purfued through the. whole work. On one
fide, this picture is feparated from that of the Society, by
palm-trees, a large pedeftal, and a figure of a pelican
feeding its young with its own blood, which not unaptly
typifies the generous labours of thofe perfonages in the
picture, who had worn themfelves out in the fervice of
mankind. On the pedeftal I fhall infcribe a motto,
which, with the alteration of a word or two, is taken
from the conclufion of the fpeech of Virtue to young
Hercules in Xejiophon's Memorabilia. " They are the
favourites of God, whofe lives have been actively vir-
tuous, cherifhed by their friends, honoured by their
country, they remain not buried in oblivion, but a glo-
rious reputation makes them flourifh eternally in the me-
mory of all men."

Behind thofe palms, near the top of the picture, are
indiftinctly feen, as immerft and loft in the blaze of
light, cherubim veiled with their wings, in the act of
adoration, and inc$nfing fomething not feen, above