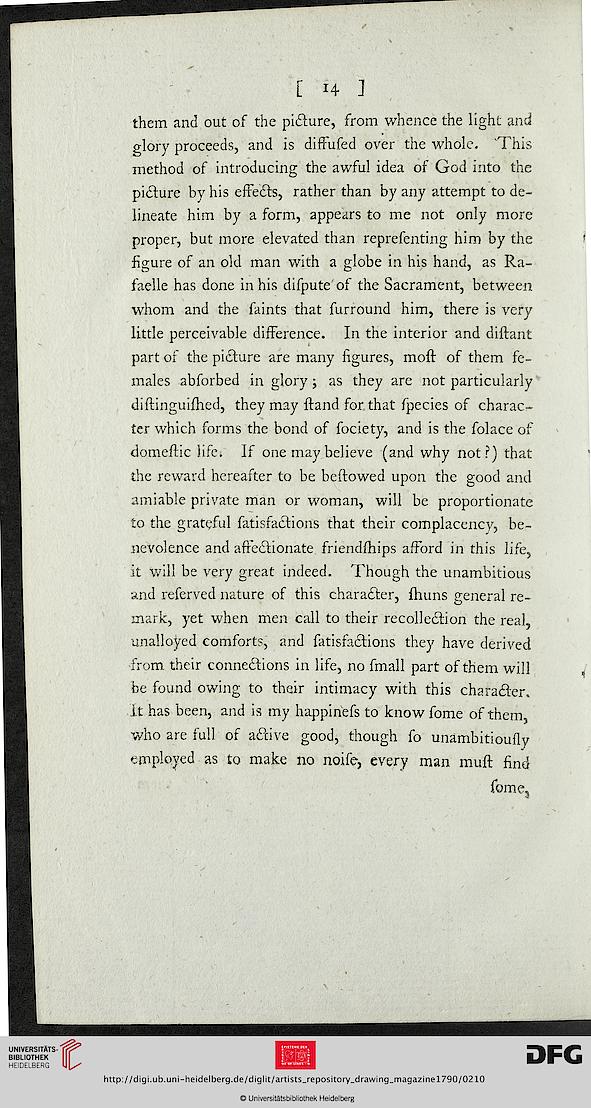 them and out of the picture, from whence the light and
glory proceeds, and is difFufed over the whole. 'This
method of introducing the awful idea of God into the
picture by his effects, rather than by any attempt to de-
lineate him by a form, appears to me not only more
proper, but more elevated than reprefenting him by the
figure of an old man with a globe in his hand, as Ra-
faelle has done in his difpute of the Sacrament, between
whom and the faints that furround him, there is very
little perceivable difference. In the interior and diftant
part of the picture are many figures, mod of them fe-
males abforbed in glory; as they are not particularly
diftinguifhed, they may ftand for that fpecies of charac-
ter which forms the bond of fociety, and is the folace of
domeftic life. If one may believe (and why not?) that
the reward hereafter to be beftowed upon the good and
amiable private man or woman, will be proportionate
to the grateful fatisfactions that their complacency, be-
nevolence and affectionate friendfhips afford in this life,
it will be very great indeed. Though the unambitious
and referved nature of this character, fhuns general re-
mark, yet when men call to their recollection the real,
unalloyed comforts, and fatisfactions they have derived
from their connections in life, no fmall part of them will
be found owing to their intimacy with this character,
it has been, and is my happinefs to know fome of them,
who are full of active good, though fo unambitioufly
employed as to make no noife, every man rauft find