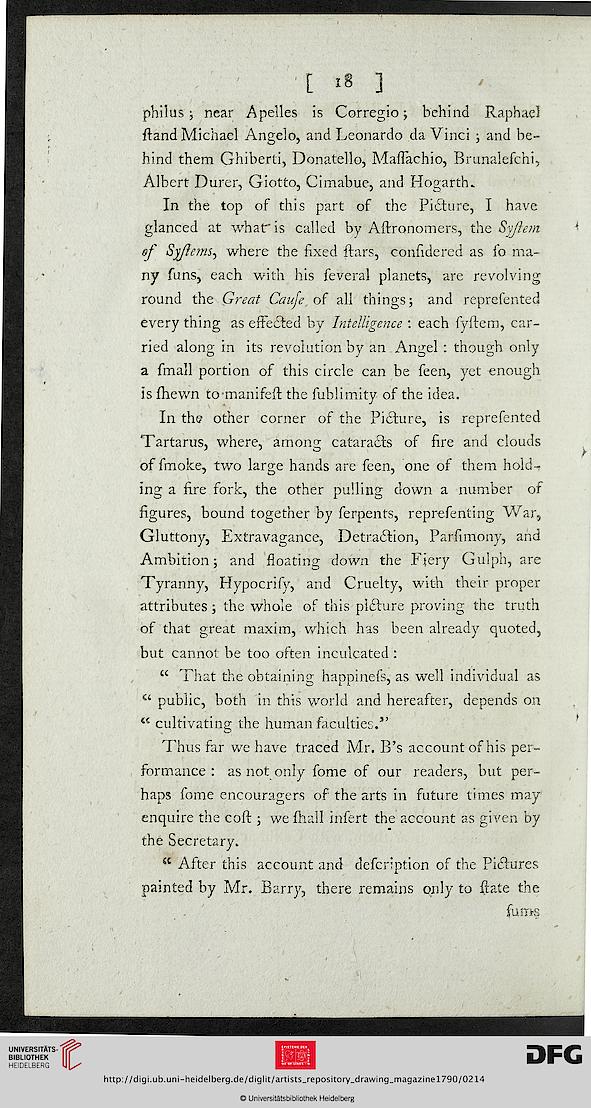 In the top of this part of the Picture, I have
glanced at what' is called by Aft ronomers, the Syjie?n
of Syjlcms^ where the fixed ftars, confidered as fo ma-
ny funs, each with his feveral planets, are revolving
round the Great Cauje of all things; and reprefented
every thing as effected by Intelligence : each fyftem, car-
ried along in its revolution by an Angel: though only
a fmall portion of this circle can be feen, yet enough
is fhewn to*manifeft the fublimity of the idea.

In the other corner of the Picture, is reprefented
Tartarus, where, among cataracts of fire and clouds
of fmoke, two large hands are feen, one of them hold-
ing a fire fork, the other pulling down a number of
figures, bound together by ferpents, representing War,
Gluttony, Extravagance, Detraction, Parfimony, and
Ambition; and floating down the Fiery Gulph, are
Tyranny, Hypocrify, and Cruelty, with their proper
attributes ; the whole of this picture proving the truth
of that great maxim, which has been already quoted,
but cannot be too often inculcated :

" That the obtaining happinefs, as well individual as
a public, both in this world and hereafter, depends on
<c cultivating the human faculties."

Thus far we have traced Mr. B's account of his per-
formance : as not only fome of our readers, but per-
haps fome encouragers of the arts in future times may'
enquire the coft ; we mail infert the account as given by
the Secretary.

il After this account and defcription of the Pictures
painted by Mr. Barry, there remains only to ftate the