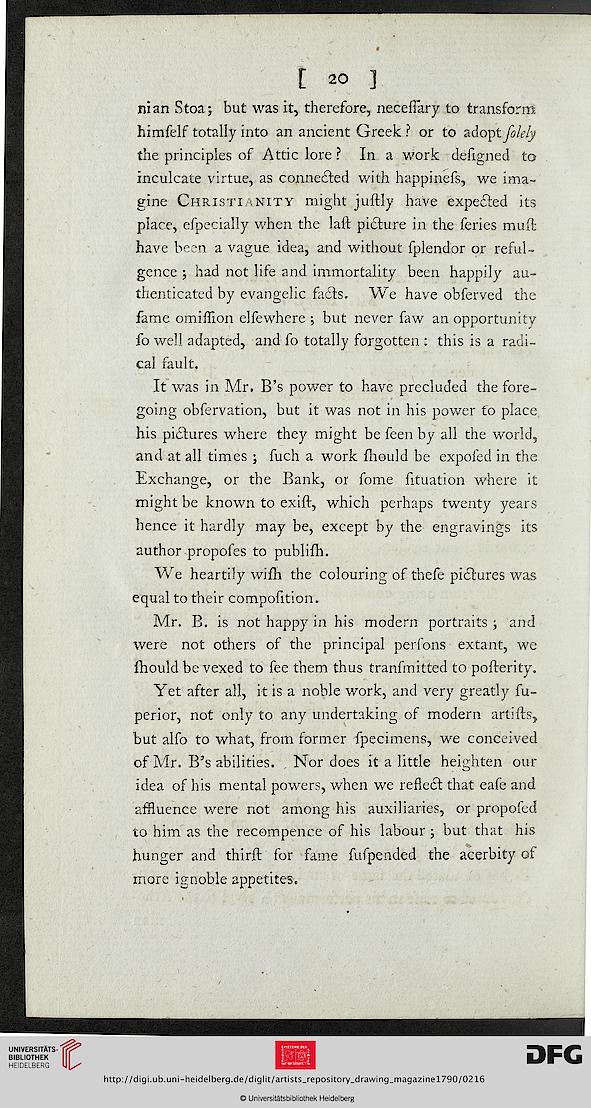 nian Stoa; but was it, therefore, neceffary to transform
himfelf totally into an ancient Greek ? or to adopt folely
the principles of Attic lore ? In a work defigned to
inculcate virtue, as connected with happinefs, we ima-
gine Christianity might juftly have expected its
place, efpecially when the laft picture in the feries mud
have been a vague idea, and without fplendor or reful-
gence ; had not life and immortality been happily au-
thenticated by evangelic facts. We have obferved the
fame omimon elfewhere ; but never faw an opportunity
fo well adapted, and fo totally forgotten : this is a radi-
cal fault.

It was in Mr. B's power to have precluded the fore-
going obfervation, but it was not in his power fo place
his pictures where they might be feen by all the world,
and at all times ; fuch a work fhould be expofed in the
Exchange, or the Bank, or fome fituation where it
might be known to exift, which perhaps twenty years
hence it hardly may be, except by the engravings its
author propofes to publifh.

We heartily wifh the colouring of thefe pictures was
equal to their compofition.

Mr. B. is not happy in his modern portraits ; and
were not others of the principal perfons extant, we
fhould be vexed to fee them thus tranfmitted to pofterity.

Yet after all, it is a noble work, and very greatly fu-
perior, not only to any undertaking of modern artifts,
but alfo to what, from former fpecimens, we conceived
of Mr. B's abilities. Nor does it a little heighten our
idea of his mental powers, when we reflect that eafe and
affluence were not among his auxiliaries, or propofed
to him as the recompence of his labour ; but that his
hunger and thirft for fame fufpended the acerbity of
more ignoble appetites.