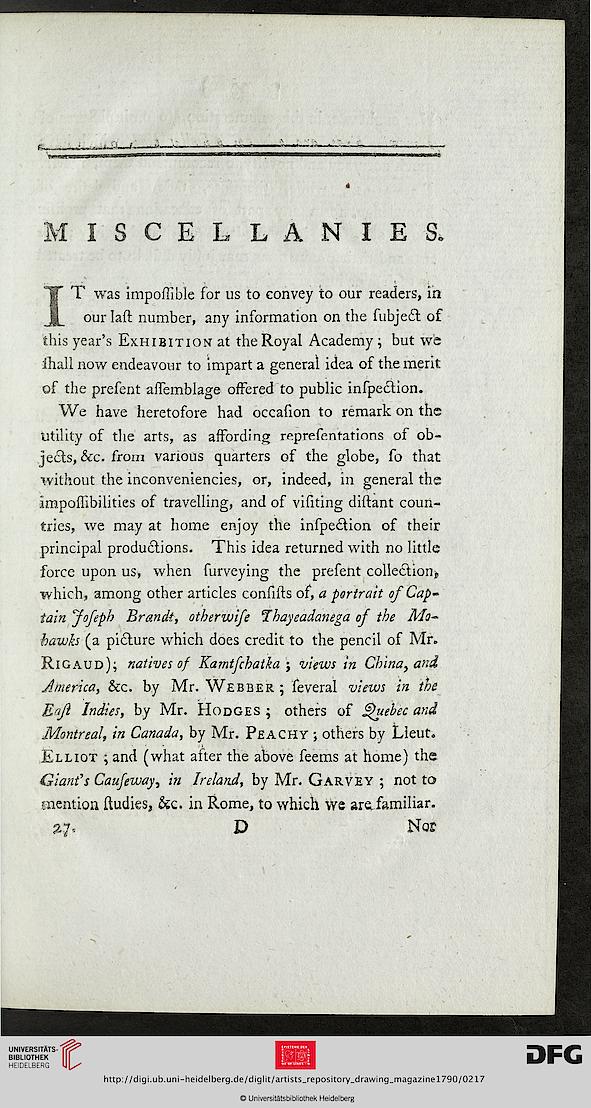 TT T was impoffible for us to convey to our readers, in
J_ our laft number, any information on the fubjecl: of
this year's Exhibition at the Royal Academy; but we
ihall now endeavour to impart a general idea of the merit
of the prefent affemblage offered to public infpection.

We have heretofore had occafion to remark on the
Utility of the arts, as affording reprefen rations of ob-
jects, &c. from various quarters of the globe, fo that
without the inconveniencies, or, indeed, in general the
impoflibilities of travelling, and of vifiting diftant coun-
tries, we may at home enjoy the infpeclion of their
principal productions. This idea returned with no little
force upon us, when furveying the prefent collection,,
which, among other articles confifts of, a portrait of Cap-
tain Jofeph Brandt, otherwise Thayeadanega of the Mo-
hawks (a picture which does credit to the pencil of Mr.
Rigaud); natives of Kamtfchatka ; views in China, and
America, &c. by Mr. Webber ; feveral views in the
Rajl Indies, by Mr. Hodges \ others of Quebec and
Montreal, in Canada, by Mr. Peachy ; others by Lieut.
Elliot ; and (what after the above feems at home) the
Giant's Caufeway, in Ireland, by Mr. Garvey ; not to
mention ftudies, &c. in Rome, to which we are familiar.
27. D Nor