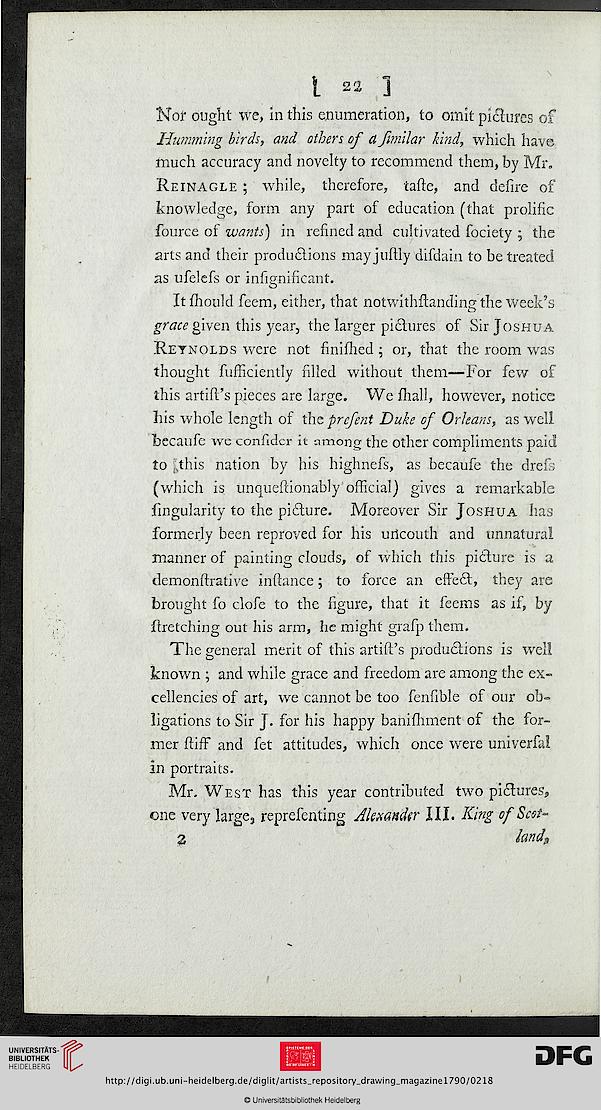 Nor ought we, in this enumeration, to omit pictures of
Humming birds, and others of a fimilar kind, which have
much accuracy and novelty to recommend them, by Mr.
Reinagle ; while, therefore, tafte, and defire of
knowledge, form any part of education (that prolific
fource of wants) in refined and cultivated fociety ; the
arts and their productions may juftly difdain to be treated
as ufelefs or infignificant.

It mould feem, either, that notwithstanding the week's
grace given this year, the larger pictures of Sir Joshua
Reynolds were not finifhed ; or, that the room was
thought fufficiently filled without them—For few of
this artift's pieces are large. We mail, however, notice
his whole length of the prefent Duke of Orleans, as well
becaufe we confidcr it among the other compliments paid
to [this nation by his highnefs, as becaufe the drefs
(which is unqueftionably official) gives a remarkable
Angularity to the picture. Moreover Sir Joshua lias
formerly been reproved for his urtcouth and unnatural
manner of painting clouds, of which this picture is a
demonftrative inftance; to force an effect, they are
brought fo clofe to the figure, that it feems as if, by
if retching out his arm, he might grafp them.

The general merit of this artift's productions is well
known ; and while grace and freedom are among the ex-
cellencies of art, we cannot be too fenfible of our ob-
ligations to Sir J. for his happy banifhment of the for-
mer ftifF and fet attitudes, which once were univerfai
in portraits.