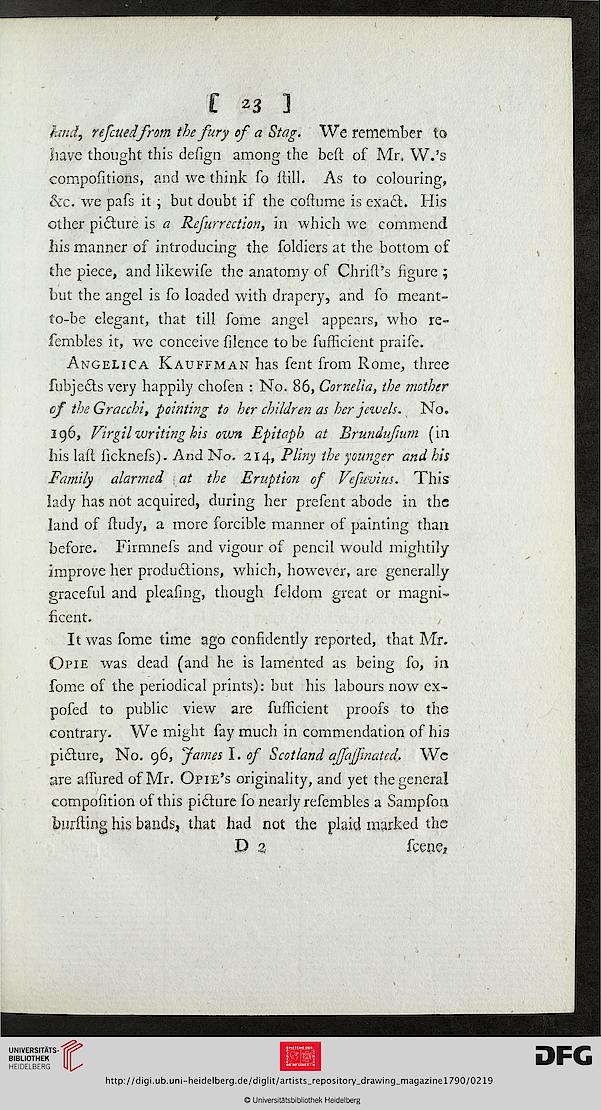 km!, refcuedfrom the fury of a Stag. We remember to
fiave thought this defign among the beft of Mr, W.'s
compofitions, and we think fo (till. As to colouring,
&c. we pafs it; but doubt if the coftume is exact. His
other picture is a Refurrectlon, in which we commend
his manner of introducing the foldiers at the bottom of
the piece, and likewife the anatomy of Chrift's figure ;
but the angel is fo loaded with drapery, and fo meant-
to-be elegant, that till fome angel appears, who re-
fembles it, we conceive filence to be fufflcient praife.

Angelica Kauffman has fent from Rome, three
fubjects very happily chofen : No. 86, Cornelia, the mother
cf the Gracchi, pointing to her children as her jewels. No.
196, Virgil writing his own Epitaph at Brundufium (in
his laft ficknefs). And No. 214, Pliny the younger and his
Family alarmed j at the Eruption of Vefuvius. This
lady has not acquired, during her prefent abode in the
land of ftudy, a more forcible manner of painting than
before. Firmnefs and vigour of pencil would mightily
improve her productions, which, however, are generally
graceful and pleafing, though feldom great or magni-
ficent.

It was fome time ago confidently reported, that Mr.
Opie was dead (and he is lamented as being fo, in
fome of the periodical prints): but his labours now ex-
pofed to public view are fufficient proofs to the
contrary. We might fay much in commendation of hia
picture, No. 96, fames I. of Scotland affajfmated. Wc
are affured of Mr. Opie's originality, and yet the general
compofition of this picture fo nearly refembles a Sampfon.
burfting his bands, that had not the plaid marked the