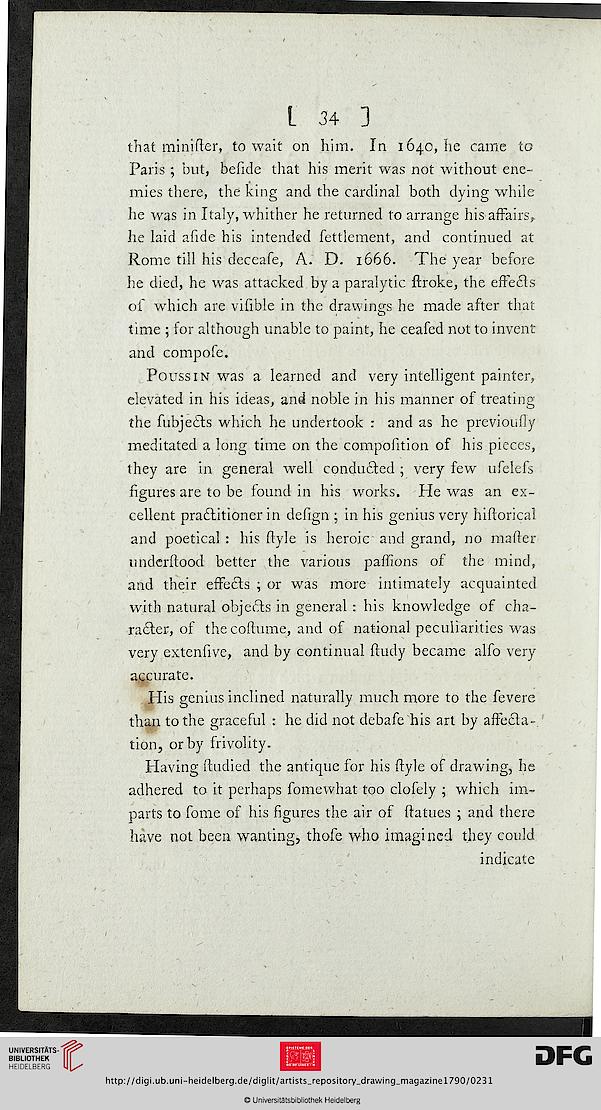 that minifler, to wait on him. In 1640, lie came to
Paris ; but, befide that his merit was not without ene-
mies there, the king and the cardinal both dying while
he was in Italy, whither he returned to arrange his affairs^
he laid afide his intended fettlement, and continued at
Rome till his deceafe, A. D. 1666. The year before
he died, he was attacked by a paralytic ftroke, the effects
of which are vifible in the drawings he made after that
time ; for although unable to paint, he ceafed not to invent
and compofe.

Poussin was a learned and very intelligent painter,
elevated in his ideas, and noble in his manner of treating
the fubjects which he undertook : and as he previoufly
meditated a long time on the compofition of his pieces,
they are in general well conducted ; very few ufelefs
figures are to be found in his works. He was an ex-
cellent practitioner in defign ; in his genius very hiftorical
and poetical : his ftyle is heroic and grand, no mafter
underftood better the various paffions of the mind,
and their effects ; or was more intimately acquainted
with natural objects in general : his knowledge of cha-
racter, of thecoftume, and of national peculiarities was
very extenfive, and by continual ftudy became alfo very
accurate.

His genius inclined naturally much more to the fevere
than to the graceful : he did not debafe his art by affecta-
tion, or by frivolity.

Having ftudied the antique for his ftyle of drawing, he
adhered to it perhaps fomewhat too clofely ; which im-
parts to fome of his figures the air of ftatues ; and there
have not been wanting, thofe who imagined they could