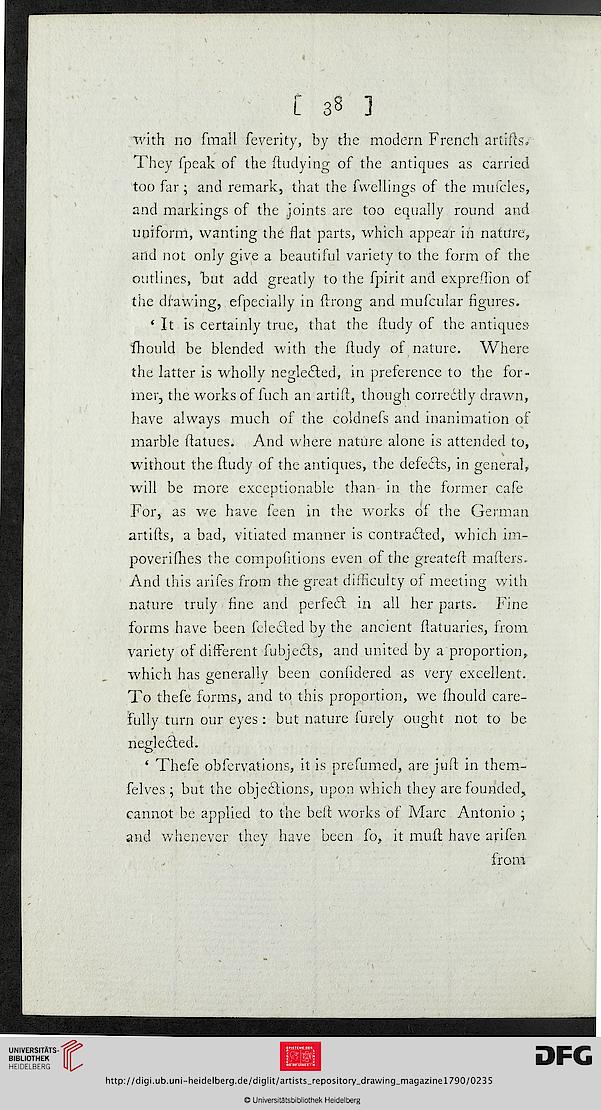 with no fin all fe verity, by the modern French artifts.
They fpeak of the ftudying of the antiques as carried
too far ; and remark, that the fwellings of the mufcles,
and markings of the joints are too equally round and
uniform, wanting the flat parts, which appear in nature,
and not only give a beautiful variety to the form of the
outlines, but add greatly to the fpirit and expreffion of
the drawing, efpecially in ftrong and mufcular figures.

' It is certainly true, that the ftudy of the antiques?
fhould be blended with the ftudy of nature. Where
the latter is wholly neglected, in preference to the for-
mer, the works of fuch an artift, though corredtly drawn,
have always much of the coldnefs and inanimation of
marble ftatues. And where nature alone is attended to,
without the ftudy of the antiques, the defects, in general*
will be more exceptionable than in the former cafe
For, as we have feen in the works of the German
artifts, a bad, vitiated manner is contracted, which im-
poverifhes the compofitions even of the greateft mafters.
And this arifes from the great difficulty of meeting with
nature truly fine and perfect in all her parts. Fine
forms have been felected by the ancient ftatuaries, from
variety of different fubjects, and united by a proportion,
which has generally been confidered as very excellent.
To thefe forms, and to this proportion, we fhould care-
fully turn our eyes : but nature furely ought not to be
neglected.

' Thefe obfervations, it is prefumed, are juft in them-
felves ; but the objections, upon which they are founded,
cannot be applied to the belt works of Marc Antonio ;
and whenever they have been fo, it muff, have arifen.