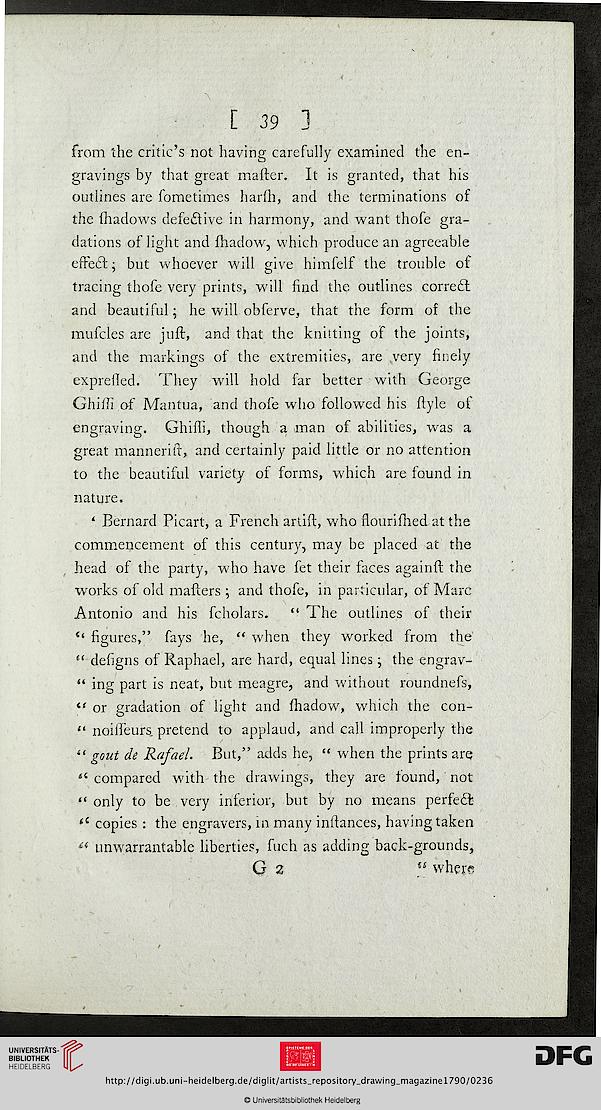 from the critic's not having carefully examined the en-
gravings by that great mafter. It is granted, that his
outlines are fometimes harfh, and the terminations of
the fhadows defective in harmony, and want thofe gra-
dations of light and fhadow, which produce an agreeable
effect; but whoever will give himfelf the trouble of
tracing thofe very prints, will find the outlines corre£l
and beautiful; he will obferve, that the form of the
mufcles are juft, and that the knitting of the joints,
and the markings of the extremities, are very finely
exprefled. They will hold far better with George
Ghiffi of Mantua, and thofe who followed his ftyle of
engraving. Ghiffi, though a man of abilities, was a
great mannerift, and certainly paid little or no attention
to the beautiful variety of forms, which are found in
nature,

' Bernard Picart, a French artift, who flourifhed at the
commencement of this century, may be placed at the
head of the party, who have fet their faces againft the
works of old mailers ; and thofe, in particular, of Marc
Antonio and his fcholars. " The outlines of their
*' figures," fays he, " when they worked from the
u defigns of Raphael, are hard, equal lines; the engrav-
" ing part is neat, but meagre, and without roundnefs,
" or gradation of light and lhadow, which the con-
« noiffeurs. pretend to applaud, and call improperly the
" gout de Rafael. But," adds he, " when the prints are
"compared with the drawings, they are found, not
f* only to be very inferior, but by no means perfect
*c copies : the engravers, in many instances, having taken
** unwarrantable liberties, fuch as adding back-grounds,